Mayor Gregor Robertson and the council he was elected with in 2014 held their last public meeting as a group Tuesday in what was at times an emotionally charged farewell that left one councillor in tears and others reflecting on their time at city hall.
0
Oct 31, 2018 8:48 AM By: Mike Howell

Mayor Gregor Robertson and the council he was elected with in 2014 held their last public meeting as a group Tuesday in what was at times an emotionally charged farewell that left one councillor in tears and others reflecting on their time at city hall. 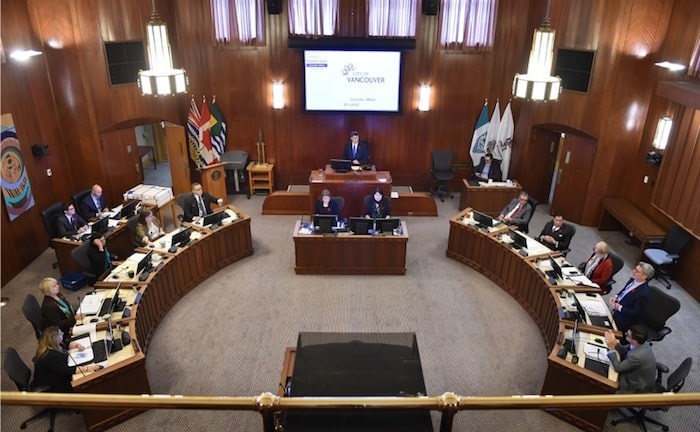 But before Robertson and some of the departing councillors got to the good-byes, council got mired in a procedural matter involving the enactment of a bylaw. It related to a vote in September at a public hearing that saw the majority of council allow for the rezoning of duplexes in almost all of the city’s neighbourhoods.

The matter was set off by Green Party Coun. Adriane Carr and NPA Coun. Melissa De Genova, who were both re-elected Oct. 20 and are the only two members of the current council about to serve another term. Both of them voted against the rezoning in September.

Carr and De Genova initially voted against the bylaw at Tuesday’s meeting but changed their votes after the city’s legal department briefed city manager Sadhu Johnston, who said it was the long-standing practice of council to enact bylaws, despite voting in opposition at a public hearing.

“That’s how we would recommend council treats it,” Johnston told council. “We will go back and do additional research on that and clarify for the incoming council whether they can re-debate and re-hash all of the discussions that came up during the public hearing process around the enactment. From where I’m sitting that does not sound like a lot of fun.”

Council eventually passed 34 bylaws, seven administrative reports and six administrative motions in what was initially anticipated to be a short meeting without any debate, or controversy. It wasn’t until near the end of the session that reflection and emotion replaced the tediousness of the proceedings.

NPA Coun. Elizabeth Ball, who was first elected to council in 2005 and re-elected in 2011 and 2014, is one of six retiring councillors. Ball noted she was close to tears as she wrapped up her speech.

Vision Vancouver Coun. Tim Stevenson said he was thinking about his last council meeting as he drove to city hall Tuesday from his home in the West End. He estimated he attended between 850 and 900 council meetings since first elected to council in 2002.

City staff’s calculation for the last four-year term is there were 1,253 hours and 43 minutes of council meetings and hearings. In addition, there were 2,703 speakers who spoke at standing committee meetings and public hearings.

“It’s kind of bittersweet for me,” Stevenson said in his remarks. “So many [of the council meetings] were very, very important to the life of the city… sometimes with unanimous votes and other times where we profoundly disagreed with each other. But nevertheless, we were all working for the betterment of this city.”

Added Stevenson: “I can't think of no better city than the city of Vancouver. And that’s precisely why we have a housing crisis. We’ve made it too good. Everybody wants to come and live in this city and, therefore, our vacancy rate is very low and the cost of housing is very high.”

Vision Vancouver Coun. Raymond Louie, who was elected with Stevenson in 2002 as members of COPE, described his time on council as a “whirlwind,” a term Coun. Hector Bremner also used to describe his one year on council after winning last year’s byelection.

Louie served with three mayors — Larry Campbell, Sam Sullivan and Gregor Robertson — 24 councillors, three city managers and four directors of planning. He thanked his family, friends, city staff, colleagues and his detractors and opponents “who made me think a little quicker on my feet, and tested some of the assumptions I had.”

Vision Coun. Heather Deal, who was not re-elected in the Oct. 20 election, did not speak during the meeting but burst into tears as she watched a video produced by city staff. The video, which was projected onto a big screen in the council chamber, listed many of the accomplishments of the council over the last term.

It was a long list, including developing community plans, the creation of Van Connect, the apology to the Chinese community for historical wrongs, reconciliation efforts with First Nations, a women’s equity strategy, the hosting of the 2010 Winter Olympics, developing the Arbutus greenway and adding more childcare spaces.

“I really loved doing this job,” she told the Courier after the meeting, still emotional as her fourth term as a councillor came to a close.

Mayor-elect Kennedy Stewart and his new council will be sworn in Nov. 5 at Creekside community centre. Vision Vancouver, which has held a majority for three consecutive terms, failed to elect one candidate to the new council.