The governing Liberals and Opposition Conservatives are locked into what appears to be a game of political hot potato
Apr 9, 2020 12:49 PM By: Canadian Press 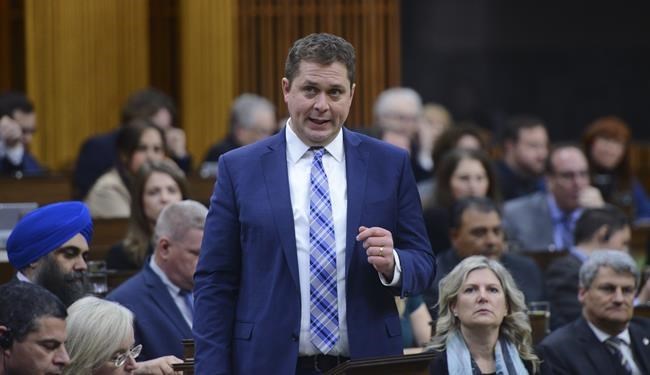 Conservative leader Andrew Scheer asks a question during question period in the House of Commons on Parliament Hill in Ottawa on Thursday, March 12, 2020. THE CANADIAN PRESS/Sean Kilpatrick

OTTAWA — The governing Liberals and Opposition Conservatives are locked into what appears to be a game of political hot potato over why Parliament has yet to be recalled to pass the latest COVID-19 economic aid bill.

Prime Minister Justin Trudeau is accusing the Tories of refusing to sit to debate the bill without provisions in place that would govern how Parliament can function over the long term.

Trudeau suggested he's willing to put his Easter plans on hold this weekend to get the bill passed.

"While we continue discussions around democratic processes and defending our institutions —which will be ongoing, which is really important to me and to all of us — we need to move forward on getting this legislation moving through the House so we can get the help out to Canadians and that is my focus this weekend," he said.

The legislation gives the government the necessary authority to roll out a massive $73-billion wage subsidy program designed to encourage companies to hire back, or keep on, their employees. New figures release Thursday show more than a million Canadians lost their jobs at the onset of the COVID-19 crisis in March.

Conservative Leader Andrew Scheer said his party supports the program and wants to be make it better.

But the bill doesn't require urgent assent, he argued.

The government has said getting the package out will take as long as six weeks, and the back-end infrastructure needed is already being put in place, Scheer said at a news conference in his Regina hometown Thursday.

Scheer said Conservatives are taking their time studying the bill and proposing improvements, including those aimed at expanding the subsidy.

"These kinds of conversations between the government and opposition parties right now is not having an impact on the timelines in terms of when people receive the benefits," he said

"These are important conversations to have to make sure we get the best results for Canadians we don't have to come back and do another do-over."

The do-over was the first aid bill put forward by the government last month. It initially included extended and unchecked powers for the government to tax, spend and enact regulations, well into 2021. The ensuing outcry from the opposition parties saw those measures curtailed.

Scheer said the government has the power to recall Parliament, and his party will show up when they are called. But it wasn't clear Thursday to what extent that RSVP is conditional on the measures  being put in place to guide the functioning of Parliament.

Among other things, the Conservatives want Parliament to sit four days a week, in person, though Scheer said Thursday they'd be open to adding virtual sessions on top of that.

Scheer said they recognize all 338 members of Parliament can't return and they are suggesting a proportion of parties based on normal standings in the House of Commons.

"But this is something we believe will benefit Canadians."

The New Democrats are proposing their own improvements to the economic aid package, including a fix to the emergency response benefit and wage subsidy so it reaches more people.

This report by The Canadian Press was first published April 9, 2020.