Why is a former Vancouver councillor bringing developers to meet the mayor?

Former city councillor Raymond Louie has been advocating for some of the city’s high-profile developers and joining them in a series of private meetings at city hall with Mayor Kennedy Stewart.

Former city councillor Raymond Louie has been advocating for some of the city’s high-profile developers and joining them in a series of private meetings at city hall with Mayor Kennedy Stewart.

Louie participated in seven meetings in February and March in the mayor’s office, which included Ian Gillespie of Westbank Projects Corp., Bruno and Peter Wall of Wall Financial Corporation and Brian McCauley of Concert Properties. 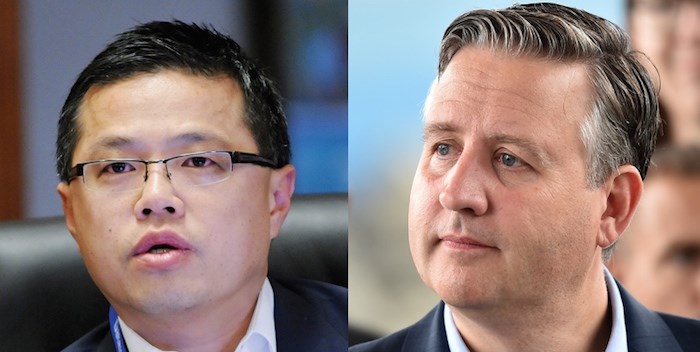 Louie, who served 16 years on council with COPE and Vision Vancouver before retiring last fall, also met three times by himself with Stewart, according to the mayor’s monthly calendars posted on the city’s website.

The frequency of Louie’s visits to city hall are in contrast to a major plank of Stewart’s election campaign in which he called for new conflict of interest and lobbying rules for elected officials and senior staff members.

The aim of Stewart’s rules — which are not in place yet — is to prevent elected officials and senior staff members from accepting City of Vancouver contracts, or lobbying for 12 months after leaving their positions.

“When an elected official or senior staff leaves city hall and takes a new role with a firm that does business with the city, it undermines public trust and confidence in our government,” Stewart said in a news release in December 2018.

“New conflict of interest rules would improve public confidence in city hall by ending the unchecked access of lobbyists to decision makers.”

On the day of that release, council unanimously supported two motions from Stewart to have city staff consider how to prevent elected officials from accepting city contracts or lobbying for 12 months after leaving their positions.

Another motion called on the provincial government to amend the Lobbyist Registration Act to cover the city or amend the Vancouver Charter to allow the creation of a lobbyist registry.

Staff has yet to provide a public update to council on the requested measures.

Stewart told the Courier this week he still believes in what he said in December and wants a lobbyist registry at city hall. In the meantime, he said, posting his calendars on the city website allows the public to see who he meets with.

However, the mayor — who has known Louie for several years — said he didn’t know what Louie’s formal relationship was with the developers, or whether he was being paid. He said a registry would provide such detail.

Stewart, whose election as an independent mayor ended Vision Vancouver’s 10 year-reign at city hall, described Louie’s role in the meetings at city hall as “advocating” for the developers.

“Raymond’s relationship with the other folks in the room are only known to them,” he said. “I have no idea what their arrangements are, and you’ll have to ask him about that.”

The Courier left phone and text messages for Louie over three days this week, but had not heard back from him before this story was posted.

Messages were also left for Gillespie, McCauley, Bruno Wall and Gary Pooni, a real estate development consultant who participated in four of the meetings in which Louie and developers met with the mayor, including a Feb. 4 visit with Gillespie.

“I never really knew any of these developers before the election,” Stewart said in response to the purpose of the meetings. “But yet I’m in a situation where our housing crisis — the key issue in the city — depends on them changing their behaviour. So, in some ways, Raymond’s been useful in terms of introductions that way. I didn’t know anybody from this industry and that’s a lot of what these meetings have been. But these are private meetings that I don’t disclose the details on.”

Added the mayor: “Our way out of the affordability crisis here in the city is really only going to be through bending the market so that developers will deliver more rental housing that is below market cost, and that’s what the majority of these discussions are.”

Louie’s 10 total meetings with the mayor were more than any other person who wasn’t either a councillor or city staff member to meet with Stewart between November and March.

Louie’s term on council ended when Stewart and the new council were sworn in Nov. 5, 2018. The calendars show Louie met three times by himself with Stewart on Nov. 28, Dec. 7 and Jan. 22. He then had seven other meetings with developers between Feb. 4 and March 29.

The calendars, which are regularly posted on the city’s website, cover November, December, January, February and March. They are typically posted the month after the meetings occur.

Louie’s busiest day at city hall was Feb. 22 when he was involved in three back-to-back meetings with the mayor, two of which involved Brian McCauley, the president and CEO of Concert Properties.

The company recently built the 15-storey Railyard housing co-op at the Olympic Village as part of a market condominium development. Jerry Zhong of Coromandel Properties was also in one of those meetings with Louie and the mayor Feb. 22.

Gillespie’s Westbank has built Woodward’s, Telus Garden, the Bjarke Ingels-designed Vancouver House and is rumoured to be the developer of choice of the Squamish Nation, which plans to develop its land at the south end of the Burrard Bridge.

Louie and Bruno and Peter Wall met with Stewart Feb. 8.

Louie and Arnold Silber of Value Property Group also visited with the mayor March 29. In other meetings without Louie present, the mayor met for lunch with real estate mogul Bob Rennie and met in his office with Ryan Beedie of Beedie Development Group.

Stewart said the three one-on-one meetings with Louie were to seek his expertise in local government after having served as a councillor, president of the Federation of Canadian Municipalities and vice-chairperson of Metro Vancouver.

Stewart pointed out he’s met with a variety of people since becoming mayor, including recent meetings with at least 12 non-profit associations. Names of those associations will be released when the April and May calendars are posted to the city website.

The mayor’s calendar shows he also met with Lee Lax and Dustin Bourdeaudhuy of Vancouver Fire Fighters Local 18, Ian Black and David van Hemmen of the Greater Vancouver Board of Trade, David Hutniak of Landlord B.C., Kathleen Bartels of the Vancouver Art Gallery and Stephen von Sychowski of the Vancouver and District Labour Council, which endorsed Stewart for mayor.

Others who met with the mayor included members of the Musqueam, Squamish and Tsleil-Waututh nations, the Mexicans Living Abroad Advisory Committee, the Guangzhou Friendship Society, Our Homes Can’t Wait Coalition, the Chinatown Society Buildings Association and the chairpersons of the Coalition of Vancouver Neighbourhoods.

Meetings and phone calls with various provincial and federal politicians, along with news reporters, are also listed in the calendars. Stewart is the first mayor of Vancouver in recent memory to make his calendars public.