It was “talk to the mayor” day at city hall Tuesday. This was the event Mayor Stewart announced back in January where people could bring their gripes, concerns and ideas directly to the mayor in an intimate one-on-one conversation.
0
Feb 7, 2019 7:09 AM By: Mike Howell

It was “talk to the mayor” day at city hall Tuesday.

Coincidentally, it was also reporter-talks-to-people-who-talked-to-the-mayor day at city hall. 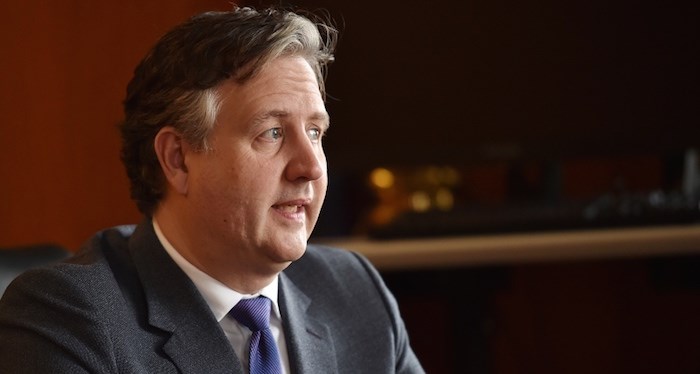 Mayor Kennedy Stewart spoke to the Courier in a year-end interview from his office at city hall. Photo Dan Toulgoet

Yep, I spent some time outside the mayor’s office Tuesday as about 20 people filed in and out of a room to have 15-minute chats with Kennedy Stewart.

This was the event Stewart announced back in January where people could bring their gripes, concerns and ideas directly to the mayor in an intimate one-on-one conversation.

Topics included broken sidewalks, the need for a stop sign at an intersection, housing, homelessness and climate change. At least those were the ones the mayor identified in my interview with him this morning.

“From global issues and how the city can tackle them right down to the nuts and bolts of day-to-day living,” is how Stewart summed up his afternoon of meetings.

“It was really good,” he said, noting none of the people he met had ever spoken or presented to city council. “Many of them voted but lots of them have never done anything else to engage in politics. So this is hearing from voices that don’t normally get heard.”

He heard from Moonhee Han, who told him how her suite in a non-profit-run social housing building in Mount Pleasant was inhabitable because of black mould. She had the inspection reports to prove it.

Han told me before she met with Stewart that she reached out to Premier John Horgan and MLAs to help, but hasn’t heard back. She also said B.C. Housing was involved and had not taken any action to remove the mould, or find her a new place.

For now, she said, she’s living in a place she found through Airbnb.

“I’m scared to be a homeless person,” said Han, noting she has “cashed out all my savings.”

When she emerged from her meeting with Stewart, Han said the mayor would investigate what he and the city could do about her plight. This is how she described having a one-on-one with the mayor:

Stewart’s predecessor, Gregor Robertson, never hosted an event in his 10 years as mayor where residents were invited to one-on-one conversations. I don’t believe this happened under the mayorships of Sam Sullivan or Larry Campbell, either.

Gaurav Mehra had a piece of paper in his hand with a list of things he spoke to Stewart about, including the need to improve conditions and create long-term solutions for people living in poverty in the Downtown Eastside.

A self-described civic politics geek who wants to start his own political party, Mehra said he questioned the mayor on why $66 million was spent on building 600 units of modular housing for homeless people.

He told Stewart cheaper housing could have been built with that money—which came from the provincial government—to accommodate a lot more people than those living in or destined for modular housing.

“He went on and on defending the reason they did this,” said the 37-year-old Mehra, who voted for ProVancouver mayoral candidate David Chen in last fall’s civic election. “I didn’t really fully understand it.”

Was the meeting worthwhile?

“It was OK, it was alright. I’m skeptical that they’re going to listen to anything I said.”

Peter Hayes, who described himself as a climate change specialist, said he would have preferred more time with the mayor but understood he had a busy schedule. He said the meeting was helpful.

“It’s a second-best alternative of not being able to provide time for all parties in the city, and there are a lot of different interest groups [who want to speak to the mayor],” said Hayes, noting his meeting with Stewart was more about an exchange of information and ensuring he was committed to fighting climate change.

Added Hayes: “Certainly no promises were made other than the promise to continue to support the climate change agenda, which Vancouver is well known for being one of the most progressive cities in Canada and internationally for pushing the climate change envelope.”

Stewart said at least 50 people are on a waiting list to participate in further 15-minute chats. Another session is planned for April. Having translation services and someone who can perform sign language may be added for that session.

Until then, Stewart said he will meet with city manager Sadhu Johnston to see what direct action the city can take to help some of the people he met with Tuesday.

“Now it’s just how far can we go to get those stop signs and sidewalks fixed and help the woman who’s got black mould in her apartment,” said Stewart, who offered the same type of meetings when he was an MP in Burnaby. “The test for me in this new role [as mayor] is to learn how far I can go to help folks. Once an MP gets involved in a case, often things move ahead pretty quickly, so I’m hoping I can have the same effect here.”