These are the three most likely outcomes of the Vancouver election

A look at three possible scenarios that could unfold after all the voting is done in Vancouver's upcoming civic election. Terri Evans, manager of the urban studies program at Simon Fraser University, provided some of the analysis.
0
Oct 17, 2018 4:21 PM By: Mike Howell

The question: How do you plan to implement any of your platform if your party doesn’t win a majority?

His answer: “Well, we’re going for a majority.”

That exchange between reporters and Sim occurred last month at the NPA’s campaign office on Broadway. Sim was there with several of the party’s candidates for city council, school board and park board.

They all applauded his response. 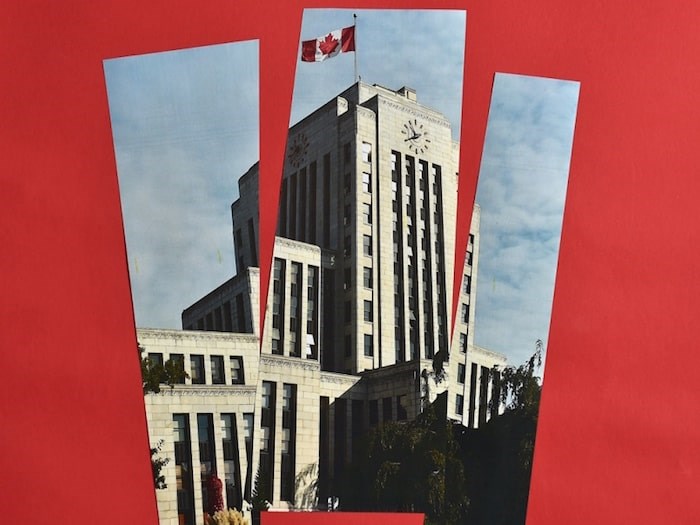 What will the makeup of city hall look like after election night? We examine the most likely outcomes. Photo Dan Toulgoet

There are 10 spots up for grabs on council, and one in the mayor’s office.

If Sim and his eight council candidates were to get elected, that would give the NPA the largest majority at city hall since Larry Campbell and COPE won a landslide in 2002.

But what’s the likelihood of that happening?

It’s a question that will be answered with certainty on Oct. 20.

For now, the Courier decided to look at three possible scenarios that could unfold after all the voting is done. Terri Evans, manager of the urban studies program at Simon Fraser University, provided some of the analysis. 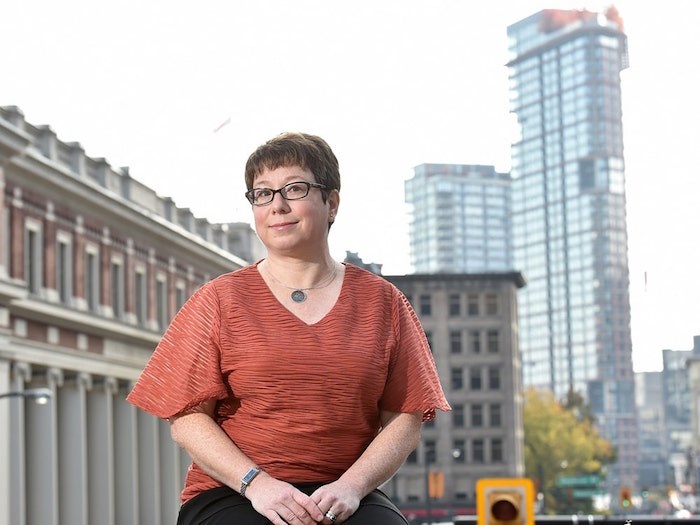 Terri Evans, manager of SFU’s Urban Studies program, says she is not anticipating the NPA to return a majority to city hall in the Oct. 20 election. The NPA last held a majority from 2005 to 2008 under Sam Sullivan. Photo Dan Toulgoet

One of the scenarios is, indeed, the election of a one-party majority government, although only the NPA, Coalition Vancouver, Yes Vancouver and Vancouver 1st have the numbers to make that happen.

A second scenario is a mayoral candidate with a party affiliation such as Sim, Wai Young of Coalition Vancouver or Hector Bremner of Yes Vancouver winning the mayoral race but failing to get a majority on council.

A third scenario is an independent mayoral candidate such as Shauna Sylvester or Kennedy Stewart getting elected and leading a council of politicians from various parties and possibly some independents.

Other scenarios exist, but let’s look at these three for now.

Scenario one — a majority government

Majority governments have dominated city hall for decades, most recently in 2002 with COPE, 2005 with the NPA and 2008 to present with Vision Vancouver. Voters appear to like party brands.

But in this campaign, there are new finance rules in place that ban union and corporate donations, Gregor Robertson is retiring as mayor and several incumbent councillors aren’t seeking re-election.

Those factors have triggered a wide-open race in what many observers have described as a “change election.” It has also meant the historical two-party mayoral race Vancouverites have become accustomed to is not in play this time.

Evidence of that is the NPA having to compete for votes with Coalition Vancouver and Yes Vancouver — two parties with mayoral candidates who had serious interests in becoming the NPA’s mayoral candidate until one (Bremner) was rejected by the party’s board, and the other (Young) changed her mind.

“I’m not anticipating a majority council,” Evans said. “I’m not sure that the NPA is strong enough to form a majority, and there is some splintering amongst their party, and their candidate is second in the polls.”

Added Evans: “Voters will tend to vote for the parties that are familiar to them. When push comes to shove, NPA supporters, even if they’re realigned with other fractured parts of the right, will still vote for some of the NPA candidates. That will bring some to the table, for sure, but I don’t know that it will bring all of them.”

That poll she referred to is one released last week by Research Co., which showed 34 per cent of respondents saying they would cast a vote for Stewart and 20 per cent for Sim; a poll released Oct.11 showed Stewart at 36 per cent and Sim at 23 per cent.

The poll from last week also showed Sim was only holding on to two of five residents who voted for Kirk LaPointe, the NPA’s mayoral candidate in 2014. If Sim has an advantage, it’s that independent mayoral candidates Sylvester and Stewart continue to duke it out on the left side of the political spectrum.

Increasingly, Sylvester has focused her criticisms more on Stewart than on Sim.

“For the left, that’s probably their biggest issue right now,” Evans said. “They’ve got two attractive candidates and their vote is split.”

Advantages: Fairly smooth sailing for the term. As city hall watchers have seen with Vision Vancouver majority governments of the past decade, parties in power tend to implement what they want and rarely agree to motions from opposition councillors.

Disadvantages: None from a party’s perspective, but Evans said it is the least interesting scenario for political observers and those voters who want more diverse discourse in the council chamber.

Can you imagine what life would be like for Sim if he won the mayoral race, but had to lead a mixed council of candidates from Vision, the Greens, OneCity and COPE?

As former COPE/Vision mayor Larry Campbell once told the Courier, being the mayor and not having a majority “would be a nightmare.” Any policy you promised to implement would likely be stalled or derailed, and those criticisms of competing parties during the campaign would not be forgotten in the council chamber.

Though Sim has described himself as a “change agent,” and believes his party will win a majority, he also seems to think he could work with other parties and candidates if the NPA doesn’t return a majority to city hall that it lost in 2008.

“I have 25 years of working with different groups with different agendas,” he said, referring to his business background. “And I can tell you, once we are in office — regardless if we have a majority, or it’s a fractured council — we are one group. We will be 11 individuals working for the best interests of the city.”

Evans said such a scenario would be awkward for Sim or another candidate affiliated with a party. COPE candidates and others on the left of the political spectrum have been ardent critics of the NPA for years, if not decades.

She likened the mayor’s role in that scenario to “herding cats.”

The same awkwardness would apply to a Stewart or Sylvester victory, if the NPA won a majority of council seats.

Evans said the need to be that “consensus builder” — a term several of the candidates have used to describe their leadership capabilities — will be key, if the lonely mayor scenario unfolded.

The mayor, she added, only has one vote.

“Almost any scenario you can imagine will bring less than a majority as a realistic option,” she said. “So they’re going to have to figure out a way to negotiate policy that they can implement.”

If a fractured council is what voters want, then one party such as the Greens could conceivably hold the balance of power, if all four council candidates win a seat. The Greens have not endorsed a mayoral candidate, saying they will work with whomever voters choose to lead the city for the next four years.

Advantages: Not many. The mayor gets a big office, earns double what a city councillor makes and will undoubtedly get to visit some interesting cities. Again, a mayor only gets one vote.

Disadvantages: The lonely mayor will be hard pressed to implement his or her platform. That person won’t have a caucus. And for those mayoral candidates knackered from the campaign, the next four years would reach a whole new level of exhaustion in the battles that will ensue in the council chamber.

For several months now, the Research Co. polling has shown Stewart as the frontrunner in the race to replace Robertson, who told the Courier last week that he will cast a ballot for either Stewart or Sylvester.

The poll released Oct. 11 confirmed Stewart’s lead and revealed more than half of respondents (53 per cent) said they will “definitely” or “probably” consider voting for independent council candidates.

The Greens, as they have for months, continue to lead the polls among parties, with 47 per cent to the NPA’s 35 per cent. COPE polled at 34 per cent, Vision Vancouver at 29 per cent and OneCity at 27 per cent.

If the polls hold true, then Stewart will be Vancouver’s new mayor and be in charge of what could be a smorgasbord council — smorgasbord, in the sense of voters get some diversity on council.

But would the business of the city get done with such diverse voices?

“The business of the city will get it done,” Evans said. “Will it take longer? Perhaps. But I don’t know that slow policy is necessarily bad policy. And negotiated policy is probably good policy because you have to get to a place where the majority will carry the vote.”

Though the former Burnaby NDP MP is running as an independent, Stewart has been endorsed by OneCity, which is running Christine Boyle and Brandon Yan for council. Stewart has also said good things about COPE’s Jean Swanson and Vision’s five council candidates.

During the campaign, Stewart has repeatedly tweeted and appeared in videos to support the council slate endorsed by the Vancouver District and Labour Council. That slate comprises a mix of COPE, Green, Vision and OneCity candidates, led by Stewart.

“The biggest question mark is to what degree will people follow the Labour Council’s recommendations to put in what looks like a mostly agreed upon slate of candidates, with a mayor who has said he’s able to cross those bridges,” Evans said.

If voters don’t vote slate, then the so-called progressive vote could be weakened and give rise to the NPA, which is what happened in last year’s byelection when the NPA’s Bremner sailed to victory.

Advantages: Evans: “I’m kind of excited about the idea of having multiple parties and their voices, and the debate that comes with that. Because I think we’ve had some pretty anemic public policy discourse around some very central issues in the city because there’s been one party that has promoted and implemented a vision.”

Disadvantages: As former city councillor Gordon Price told the Courier a few weeks ago: “If people think that the free flow of ideas and exchange is something they would like, they will get very tired of what just appears to be argumentative back-and-forth, and no consistent governance. And that’s where I think the toleration for this would be pretty limited, unless a group of people get together to form a coalition that effectively becomes a party so they can govern, and you’re kind of back where you started.”

OPINION: Struggling businesses will topple despite the feds' 75% subsidy that appears to offer a solution
Mar 31, 2020 4:09 PM