Jagmeet Singh is set to join the legion of renters in Metrotown, as he doubles down on his gamble to gain a seat in Parliament and cement himself as the future of a struggling federal NDP.
0
Nov 16, 2018 7:23 AM By: Kelvin Gawley

Jagmeet Singh is set to join the legion of renters in Metrotown, as he doubles down on his gamble to gain a seat in Parliament and cement himself as the future of a struggling federal NDP.

The New Democrat said he and his wife, Gurkiran Kaur Sidhu, have found a rental home in Burnaby South – the federal riding where he hopes to win an eventual byelection. 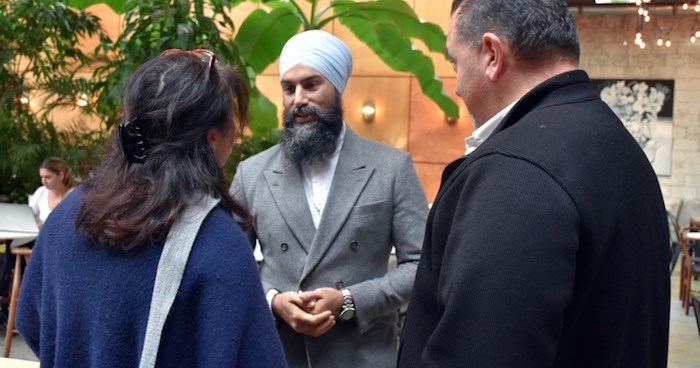 “We’re really excited to make it our home, and that will be something we do very shortly,” he told the NOW.

Singh was born in Ontario and has never lived in B.C., but he has pinned his hopes on the seat left vacant by former MP, and current mayor of Vancouver, Kennedy Stewart.

Now in his second year leading Canada’s New Democrats, Singh has never held a seat in the House of Commons. He said he has been canvassing and door-knocking in the area to get a better understanding of local issues, while also “getting a sense and feel” for the community by visiting the farmers’ market and paddling a canoe on Burnaby Lake.

Singh said his ability to listen to locals will make him a good fit to represent a community where he’s a newcomer.

But Singh has been campaigning without a date set with voters, as Prime Minister Justin Trudeau has declined to call the byelection.

The NDP appears desperate to get Singh in the house, as the party struggles in national polls and lags far behind its rivals in fundraising. Singh’s leadership could come into question if he loses the race Stewart won narrowly in 2015.

Last month, the federal leaders of the Greens, Conservatives and Bloc Quebecois joined Singh in penning a letter to Trudeau urging him to call the vote in four vacant ridings, including Burnaby South. And this week four NDP MLAs representing Burnaby – Anne Kang, Katrina Chen, Raj Chouhan and Janet Routledge – wrote their own letter to the prime minister expressing disappointment in his “decision in delaying the call.”

Trudeau recently called a byelection for an Ontario riding but not for three others. He could call a Burnaby South election as late as March 2019.

“We’re hopeful, though, that the pressure that’s mounting is going to be successful in letting this government know that, ‘Listen, people deserve to have a voice,’” Singh said.

Housing is the top local issue, Singh said. He has criticized the Liberal government’s slow implementation of a national housing plan and has said the feds need to be more involved in building affordable housing nationwide.

He also said that as an MP he would champion the long-awaited redevelopment of Burnaby Hospital. The federal government could provide funding for a new building, he said.

“The current hospital infrastructure is not adequate and folks really want to see an up-to-date modernization, a new hospital that actually can fulfil the needs of the community,” he said.

Singh has firmly opposed the twinning of the Trans Mountain pipeline and said the Federal Court of Appeal ruling that quashed federal approval of the project confirmed his stance that the project was approved without adequate environmental review or First Nations consultation. (Those processes are being redone, with the prime minister vowing to continue with the expansion.)

But what happens if Singh becomes prime minister and the head of a government that owns both the existing pipeline from Edmonton to Burnaby and the expansion project?

Singh said he would initiate an audit of the pipeline, with the eventual goal of divesting from the project.

“We don’t know exactly what we purchased, what it is exactly. We need to have an assessment of that before we make a decision on what we do moving forward,” he said. “Canadians don’t want our country to be in the business of owning a pipeline. We should be in the business of renewable energy, green energy ... that’s where we should be investing our dollars, that’s the future.”

Singh also said he will push Trudeau to declare a public health emergency related to the overdose crisis. This would open up funds to support frontline workers providing harm reduction services to those affected by the crisis that has killed thousands of Canadians in recent years.

He also said Canada must address the effects of harmful drugs through a public health lens, rather than a criminal justice lens.

On Thursday, Singh publicly called on Trudeau to launch a criminal investigation and possibly charge drug companies for their role in the opioid crisis.