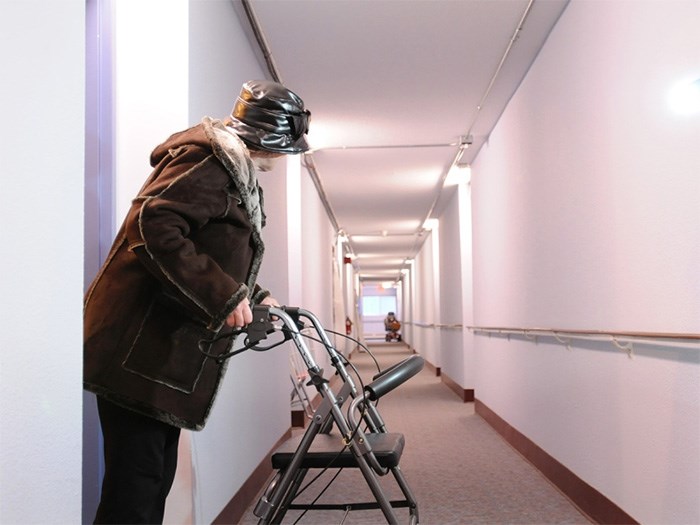 Residents in Vancouver nursing homes waited in vain on Saturday for polling staff to arrive. They hadn’t been told that mobile voting wouldn’t be offered in the October 14 byelection. File photo. Photograph By DAN TOULGOET

Ever since she was legally entitled to vote, a 97-year-old resident at St. Vincent’s Langara nursing home has never missed an election.

It was only late in the day that residents realized that the City of Vancouver wasn’t sending polling staff to the nursing home, says Linda Fox, whose mother lives at the home.

The 97-year-old was dismayed, and not only because it spoiled her perfect voting record (in a byelection that attracted only 11 per cent of voters.)

“She was angry, hurt and disappointed,” and she wasn’t the only one, says Fox, who has written a letter of complaint to Isobel Mackenzie, the province’s advocate for senior citizens. “She’s from a generation who knows what a vote means. The right to vote has come with a cost….

“Who can sit there and wipe [residents of nursing homes] off the map? It’s hurtful and insulting. Democracy is not a whim or a convenience. It’s their right.”

In her letter to Mackenzie, Fox writes that in every other election, whether it’s federal, provincial or municipal, polls are sent to nursing homes to allow residents to vote. Usually, signs are posted well in advance of voting day, which often was held the same day as an advanced poll.

“This week we did not see signs but assumed it was business as usual for the 2017 byelection and that polling staff would be attending St. Vincent’s Langara on election day as they had not been there on advance poll days,” Fox says in her letter to Mackenzie. “Family members, residents and staff were shocked on Saturday evening when it became evident that polling staff were not going to attend SVL.”

Fox contacted the city’s 3-1-1 service and says she was given a prepared text that said, “We decided not to go to Vancouver care homes this year as this is just a byelection. If care home residents wish to vote they can use the mail-in ballot system.”

Not only was it too late to know this would be the residents’ only option, Fox said, but no one was told of this “significant voting change” by “one of the 30-plus city communications officers.”

Providence Health Care, which operates St. Vincent’s Langara, confirms that none of its nursing homes were contacted in advance about the lack of voting opportunities.

“The City apologizes that we did not provide adequate correspondence regarding voting provisions for care homes and that, as a result, residents at these locations had limited opportunities to vote in the by-election,” Jag Sandhu, communications co-ordinator for the city, said in an emailed response to the Courier. “We will be contacting the care home directly to discuss this matter. Enabling citizens to vote in civic elections is a significant priority for the City and ahead of the 2018 election we will continue to look at ways to make it easier for the electorate to make their voice heard.”

“Within these restrictions, he wrote, “the City aimed to make the most of the budget and time to produce and deliver advertising about the by-election. The City had a budget of $1.5m which includes voting location materials, rentals of space and advertising and staffing costs….

“The City had to make many difficult decisions about the by-election process, which included not mailing out of Voter Information Cards, which would have cost roughly $500,000, and not deploying mobile voting stations. To that end, the City recognizes that we should have alerted care homes in advance that mobile voting was not available for this by-election.”

Mobile voting will be back for the 2018 municipal elections, he said. "The City will ensure residents living in care homes are engaged."

Sandhu’s email also highlights the city’s efforts to publicize the election including a print voter guide, posters and newspaper and online advertising, as well as reaching out in Chinese, Punjabi and French.