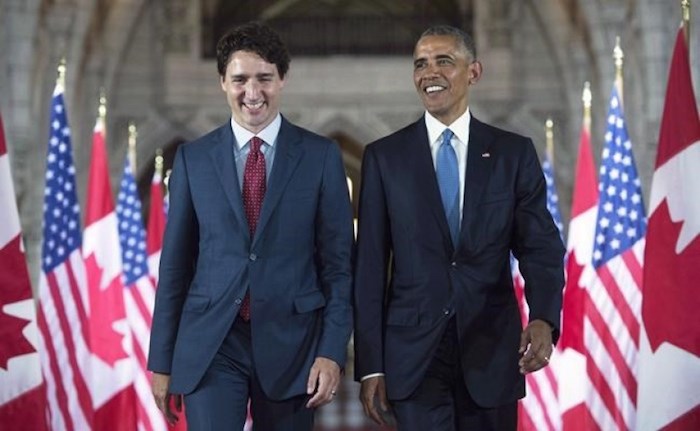 U.S. President Barack Obama and Prime Minister Justin Trudeau walk down the Hall of Honour on Parliament Hill, in Ottawa, June 29, 2016. In a message on Twitter, Obama says the world needs progressive leadership and he hopes Canadians will give Trudeau another term as prime minister. THE CANADIAN PRESS/Paul Chiasson

Obama said in a message Wednesday on Twitter that while he was president he was proud to work with Trudeau. He called Trudeau a "hard-working, effective leader" who has taken on major issues like climate change.

"The world needs his progressive leadership now, and I hope our neighbours to the north support him for another term," Obama wrote.

I was proud to work with Justin Trudeau as President. He's a hard-working, effective leader who takes on big issues like climate change. The world needs his progressive leadership now, and I hope our neighbors to the north support him for another term.

"Thanks my friend," Trudeau replied a little while later, "we're working hard to keep our progress going."

Obama's support for Trudeau landed with polls suggesting the Liberal leader is locked in a tight race with Conservative Leader Andrew Scheer.

It took the Liberals a little over an hour to insert Obama's message into a party fundraising pitch that was emailed directly to potential donors.

"Here's what Barack Obama had to say this afternoon:" reads the note, which then nods to an image of Obama's tweet. It urges the email's recipient to provide an "urgent campaign donation" to help Trudeau and the Liberals win another mandate.

Trudeau and Obama quickly developed a close friendship after the Liberals won the 2015 election — and they appear to have maintained their bond even after the end of Obama's second presidential term in January 2017.

Thanks my friend, we’re working hard to keep our progress going. https://t.co/l4V42PZbef

They had dinner together last spring at an Ottawa-area restaurant while Obama was in the capital to headline a speaking event in front of more than 11,000 paying attendees. The former president has long been popular with many Canadians.

Obama has also given public endorsements to other high-profile, international politicians.

In 2017, he voiced his support in a video for French presidential candidate Emmanuel Macron. A year earlier, while on his final overseas trip as president, he offered an endorsement of German Chancellor Angela Merkel, according to a report by the Washington Post.

For some, Obama's endorsement of Trudeau raised concerns.

Ian Brodie, who was chief of staff for former Conservative prime minister Stephen Harper, wrote on Twitter: "I await a response on the Obama tweet from the federal government's rapid response team on foreign interference..."

Green Leader Elizabeth May said later Wednesday that she was surprised a former U.S. president would endorse a candidate or engage in Canadian politics.

"Clearly, we remember the 'bromance,' so there's always that, but I think it's important for Canadians to decide who forms government," May said in Victoria.

"The clearest and best result for this election is if we avoid a false majority, for either the Liberals or the Conservatives, to force them to have to listen and to work with some of the parties in the House of Commons that may be smaller. We're much smaller, but we're also going to hold to principle over power."

Heyman, who was appointed envoy by Obama, wrote that he and the former president got to work directly with Trudeau. He said they saw "his dedication and effectiveness" as a leader.

"Canada has been very well served with (Justin Trudeau) as their prime minister," Heyman wrote.

This report by The Canadian Press was first published on Oct. 16, 2019.

—With files from Jordan Press