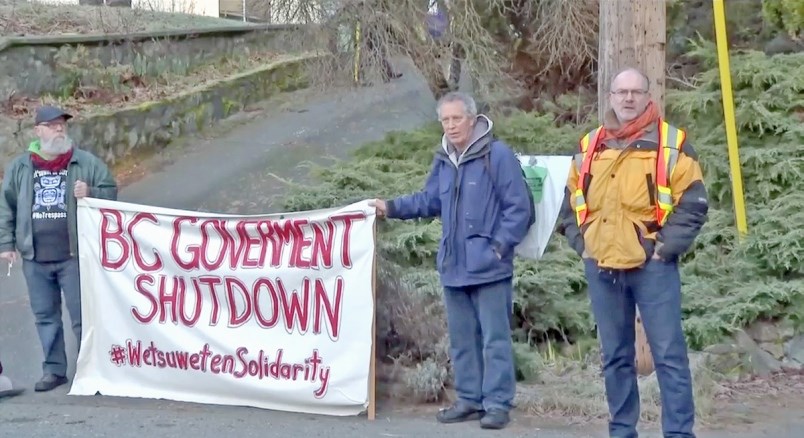 Protesters outside the home of B.C. Premier John Horgan on Tuesday. Feb. 18, 2020 Photograph By CHEK NEWS

Well that's scary: 34% of the 422 readers who took our latest online poll in the last 24 hours said that they feel it's either "absolutely" okay for protesters to blockade politicians' homes or that it's okay but it "depends" on the situation.

Only 66% percent said "hell no", it's going too far to harrass politicians in this way.

We decided to run the poll after exactly that thing happened. You likely already read that four protesters decided to cross the line at Premier John Horgan's home earlier this week.

He wasn't there at the time but his wife was in the house when, as RCMP were told, demonstrators started banging on the door, saying they were going to make a citizen’s arrest of the politician, in support of the hereditary Wet’suwet’en chiefs who oppose the Coastal GasLink pipeline.

The Premier arrived with a security detail and verbally engaged with the demonstrators. It seems that there may have been some swears.

Three of the people blockading his driveway were arrested after not leaving an "exclusion zone" the RCMP had set up.

Horgan later told reporters that “It was certainly well and truly beyond the line... and if people think that it helps their cause to terrorize my spouse, then they’re dead wrong.”

I would have thought that any right-minded person would agree with that, but the results of our poll have me somehwat baffled.

In my view, no matter how noble you feel your cause is - or how noble it actually is - we should all have the decency to voice our displeasure without making elected officials fear for their safety, and the safety of their families.

Let's say some people were really angry about abortion being legal in Canada, and they decided to bang on the Prime Minister's door saying they were going to arrest him for "murdering" babies, then set up camp at his house until he promised to ban abortion. Is that okay?

How about people who work in forestry in B.C. who are upset that their jobs are going away? Is it cool for them to show up at B.C. politicians' homes?

Or folks who are upset that they're out of work as a result of a pipeline not being constructed, who have families to feed? Should they pull their trucks and their yellow vests up onto the lawns of politicians and start honking their horns until the action they want is taken?

Everyone has the right to protest, to share their views on social media, to organize and, most importantly, to vote.

If we want to keep our democracy safe, we can't allow - or endorse - the type of violation that happened at the Premier's home this week.

Senator Larry Campbell drove from B.C. to Ottawa to vote on the emergency COVID-19 bill
Mar 26, 2020 4:14 PM
Comments
We welcome your feedback and encourage you to share your thoughts on this story. We ask that you be respectful of others and their points of view, refrain from personal attacks and stay on topic. To learn about our commenting policies and how we moderate, please read our Community Guidelines.