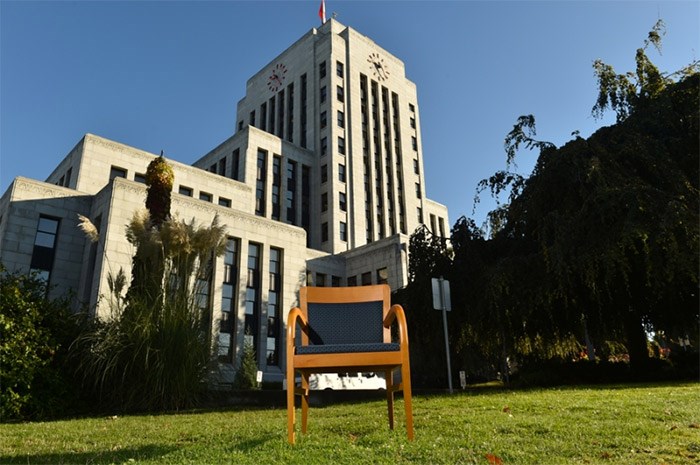 Nine candidates are vying this Saturday to be Vancouver’s next city councillor. The seat became vacant this summer when Geoff Meggs resigned to become Premier John Horgan’s chief of staff. Voters can also cast a ballot for nine school trustees on the same ballot. Photo Dan Toulgoet

If the race for the vacant council seat at city hall were solely a contest based on the public’s familiarity with candidates, then Pete Fry, Jean Swanson and Judy Graves would have an edge.

Swanson ran for mayor in 1988 against Gordon Campbell and is a longtime fighter for poor people and recipient of the Order of Canada for her work.

Graves is the city's former homeless advocate who was council's go-to person for understanding the state of homelessness in Vancouver. Former councillor Peter Ladner even wrote a song about her titled, "Angel of Broken Wings."

The trio's public profiles were evident before announcing their runs.

Their main competitors, Diego Cardona of Vision Vancouver and Hector Bremner of the Non-Partisan Association, cannot say the same.

The answers from Cardona and Bremner are what you would expect: No, they say, it doesn’t matter because they bring new energy to their respective parties and believe their policies will carry the day at the ballot box.

But then Cardona and Bremner have an advantage that Fry, the independent Swanson and Graves of OneCity cannot match. They belong to two well-funded parties that since 2005 have dominated city politics in Vancouver.

Vision Vancouver and the NPA are machines.

As financial documents have shown election after election, the parties raise and spend millions of dollars to get their candidates elected. Both parties employ seasoned campaigners, attract an army of volunteers, have a solid base of supporters and can masterfully pull the vote on election day.

No matter which independent candidates run against them — whether it’s for the mayor’s seat, a council seat, a school trustee’s position or for commissioner on the park board — they always lose.

Vancouver hasn’t had an independent city councillor since Carole Taylor won a seat in 1986. That victory was arguably won because of Taylor's name recognition and her previous ties to the NPA, whose members ousted her in a controversial nomination race the same year.

The Greens are the only party in the past decade that has gained some ground on Vision and the NPA, yet they are far from tipping the balance of power.

Adriane Carr is a councillor, Stuart Mackinnon and Michael Wiebe are park board commissioners and Janet Fraser was a school trustee — until the former B.C. government fired her and the rest of the board last year for not balancing a budget.

The Greens made those gains in 2014 on a budget of about $100,000. That's saying something in today's "wild west" of big money campaigns, which have no contribution or spending limits.

Carr, it should be noted, topped the council polls with 74,077 votes.

But the Greens' success came in a general election, where voters can potentially vote for 27 people, from mayor to councillor to school trustee to park board commissioner.

This time around, voters have one choice for council and nine for school board.

Vision isn't saying how much it's spending on its campaign, which includes promoting five candidates for school board. The NPA's Bremner suggested Vision will spend $600,000 to $800,000, an estimate he said comes from "some of our people knowing how their operation works."

"We're spending a fraction of that," said Bremner, but wouldn't disclose a budget.

"No, that's insane — same old 'say anything' NPA," Nixey wrote me in an email. "No one from Vision talks to failed B.C. Liberal candidate and oil and gas lobbyist Hector D. Bremner. Our volunteers are knocking on doors and connecting with Vancouver voters, and Mr. Bremner should spend less time inventing stories and more time listening to Vancouverites."

Swanson said her campaign will probably spend less than $40,000. The Greens, which are also running three candidates for school board, have budgeted around the same. I never heard back from Graves on OneCity's budget, although the party, which is also running two school board candidates, did receive a donation from the Vancouver and District Labour Council.

Regardless of money being spent, the fact is a byelection doesn't generate the interest of a general election. Voter turnout is usually abysmal and, in this race, the balance of power will not shift at city hall, no matter what the outcome. 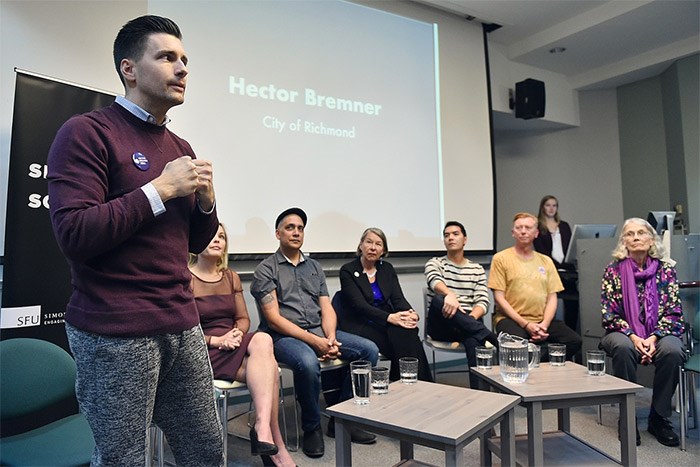 The NPA’s Hector Bremner and some of the nine candidates vying for the vacant seat on city council participated last week in an all-candidates’ debate at Simon Fraser University. Photo Dan Toulgoet

Since former Vision councillor Geoff Meggs resigned in the summer to become Premier John Horgan's chief of staff — and force the $1.5 million byelection — Vision still holds six seats on the 11-member council and has ruled city hall since 2008.

The city's last byelection for a councillor was in 1992. Turnout was about 10 per cent. Port Moody had a byelection Sept. 30 and 12 per cent of voters showed. In Kamloops, on the same weekend, 21 per cent of eligible voters turned out in a race to elect a new mayor and two councillors.

But as Janice MacKenzie, the city's chief electoral officer, pointed out, the school board race in Vancouver is "the wild card" in measuring how many voters will cast ballots in what would otherwise be a ho-hum contest.

In a general election, she said, voters will sometimes only vote for mayor and not fill out an entire ballot that includes candidates for council, school board and park board.

However, in doing some math on the 43.4 per cent turnout in the 2014 general election, MacKenzie determined that 42.5 per cent of voters also voted for school trustee candidates.

With the controversy surrounding the board being fired, and the new NDP government's decision to allow school trustee candidates on the ballot, those factors could have an impact in voter interest.

“I’m actually hopeful that as a result of that, that it drives up the attendance,” she said, noting 19 candidates are vying for the nine spots on school board.

MacKenzie's best guess is that 20 to 25 per cent of the city's 441,000 eligible voters will cast a ballot, if they haven't already in advance polls at city hall, where I spoke to a handful of voters Oct. 4 as they left voting booths. A total of 1,988 ballots were cast that day.

I focused my questions on whether voters were casting a ballot for the party, or the person, or both. Their answers varied, with Grace Eiko Thomson saying she voted for Swanson for her decades of commitment to social justice and her humility. Joan Deverteuil voted for Fry and a blend of left-of-centre school board candidates who she said are more in line with her politics.

Frank Pollock, who lives in the West End, voted for "Hector something" of the NPA for council and the party's five school board candidates. Why?

"Because they're not Vision," he said, adding he was disappointed the Vision-led council approved the construction of new buildings to the Beach Towers complex, which is in front of his condo and includes 133 rental units. "I see Vision as supporting renters and not us [owners]."

Karl Miller wouldn't say who he voted for but tipped his hand in arguing no one party should hold a majority. He said he voted for a man and it was important to him that he belonged to a party.

"I have certain opinions about what has happened, and I vote accordingly," he said.

There were Vision supporters who cast ballots that day, but I didn't happen to run in to any. Cardona assured me prior to an all-candidates' meeting at Britannia secondary last week that his campaign was in full gear and he expects a good showing at the polls.

“I’m not getting anybody at the doorstep telling me outright that ‘I’m not voting for you,’” Cardona said. “But I am getting some folks who are saying, ‘We’re excited you’re the candidate, we’re excited to see someone fresh in the party.' It gives some people hope in the party moving forward.”

It is really Cardona’s race to lose.

He is running for a party that has been in power for nine years. He has a sitting mayor promoting him on social media, in videos and at fundraisers, one of which attracted 400 supporters and forced Cardona to leave 45 minutes in to the all-candidates' meeting at Britannia.

Swanson: “We’re trying to do it with youth, enthusiasm, art and good ideas that appeal to the people who are suffering the most. We’re getting a lot of positive response.”

Fry: “I think people are done with the slick, big money campaigns. Having been at this for a while, I think I have a bit more credibility as a candidate. We’re at a financial disadvantage — sure — but we have a lot of other advantages that they can’t touch.”

Graves: “I’m hoping that policy prevails over the machine. In lieu of that in this byelection, I hope that by the general election in 2018 that the oil supply is cut off to the machine.”

That was a reference to the ongoing fight of local politicians to ban union and corporate donations from civic campaigns. It's no secret that councillors past and present of all political stripes want the government to reform civic campaigns.

Until then, they say, they're playing by the rules. 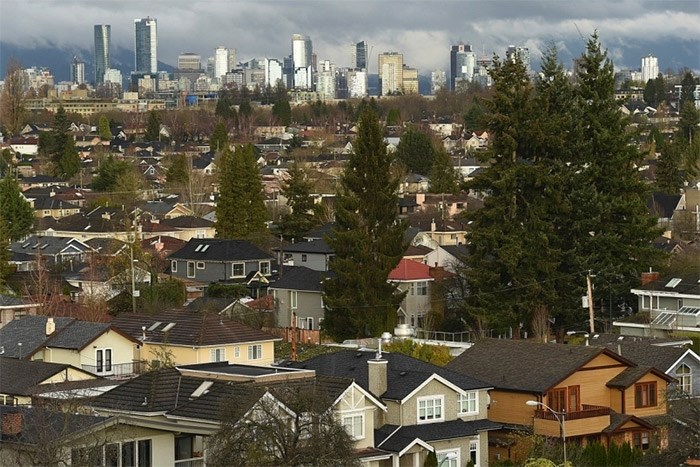 Many of the candidates vying to be Vancouver’s next city councillor have focused their campaigns on ways to generate more affordable housing. Photo Dan Toulgoet

Which leaves Fry, Swanson and Graves with no other option but to believe their plans to make Vancouver more affordable will resonate with voters. It's easily and predictably the one issue dominating the race, although Sensible Vancouver candidate Mary Jean "Watermelon" Dunsdon has focused her campaign on "fair bylaws" to keep marijuana dispensaries open.

Fry wants a “new, fair deal for housing” and to “encourage the kind of density that builds community, not destroys neighbourhoods.”

Swanson wants a rent freeze for four years and a “mansion tax” on properties worth more than $5 million.

Graves wants a luxury property tax on the wealthiest five per cent of homeowners and to ensure all city-owned rentals are fixed at 30 per cent of a tenant’s income.

The NPA and Vision?

Bremner wants to implement zoning changes to achieve "greater residential density and diversity," use more city land to build housing and speed up the building permit process to get homes built faster.

Cardona wants 1,000 new co-op homes, more co-housing projects and to develop "a new kind of Vancouver special" that can double the number of homes in single-family neighbourhoods.

How all of these candidates plan to make good on their promises requires a deeper read of their platforms, maybe attending an all-candidates' meeting or getting some face time with them.

That requires some effort.

And, realistically, how deep into the policy weeds is the average voter willing to venture?

Theories abound on who will win the council race. Theory one: The left-of-centre vote will cancel itself out, giving rise to the NPA. Theory two: Vision Vancouver's machine is too powerful to stop. Theory three: The surge of the Green brand in the 2014 civic election, and boosted provincially in May by the election of three MLAs, will finally benefit Fry.

Or, maybe Swanson and Graves will have wider appeal than some claim. The marijuana lobby is also a force in Vancouver. As for independents Gary Lee, Damian Murphy and Joshua Wasilenkoff, this city's political history is not on their side.

Up to you, Vancouver.

Cast a ballot. Vote machine, or not to machine.