Senator Larry Campbell drove from B.C. to Ottawa to vote on the emergency COVID-19 bill

I'm happy to report that senator Larry Campbell has made it to Ottawa as of a couple days ago and his "grand adventure" driving across the country to vote on the emergency bill for COVID-19 has concluded. Well, at least the first half of it has.

The previous edition of Travels with Larry and Sue saw the former mayor of Vancouver making a shocking admission that he thinks "Hawaiian pizza is the best."

In the one before he dedicated the morning to Kenny Rogers and thought back on his time spent in Stetler, Alberta.

And the one before that was the introduction to this series, where I spoke to him in a Safeway parking lot on his way out of Vancouver.

This will be the last dispatch for a little while; he'll be taking his sweet time on the trip back to his home in B.C., taking in more sights. He promises to stop and take a lot more photographs, so I'm thinking we'll bring you a gallery or two of his greatest hits.

Well, @BobKronbauer will be happy to see a certain someone made it to Ottawa pic.twitter.com/skLt7Fz3F2

My previous calls with Larry had been conducted from my home office, with him driving and talking to me on speakerphone.

This last one the tables were turned as I was driving when he called from outside his apartment in Ottawa.

I hadn't realized that my phone recorder doesn't function properly when I'm on speakerphone in my car, so I apologize but I don't have any quotes from him.

However he and Sue did spend their last night on the road in a cute little motel in smalltown Ontario.

He described a scene where before they went to bed, he took Sue out for a walk in the parking lot. All of a sudden he started to hear wolves howling in the night, not far from where they were standing. Not surrounding them, but mostly coming from across the road.

Sue cowered in fear so they went back inside. I didn't tell you this previously but the bluetick coonhound once belonged to a hunting guide, and they gave her up because she was afraid of other animals. That's why, as Larry put it, "Sue wouldn't participate," when they visited Moose Jaw's giant moose.

Anyway, they're in Ottawa now. Sue is comfortable, there are very few people walking the streets, and Larry is planning his route back.

Thanks for following along as he made his way east! 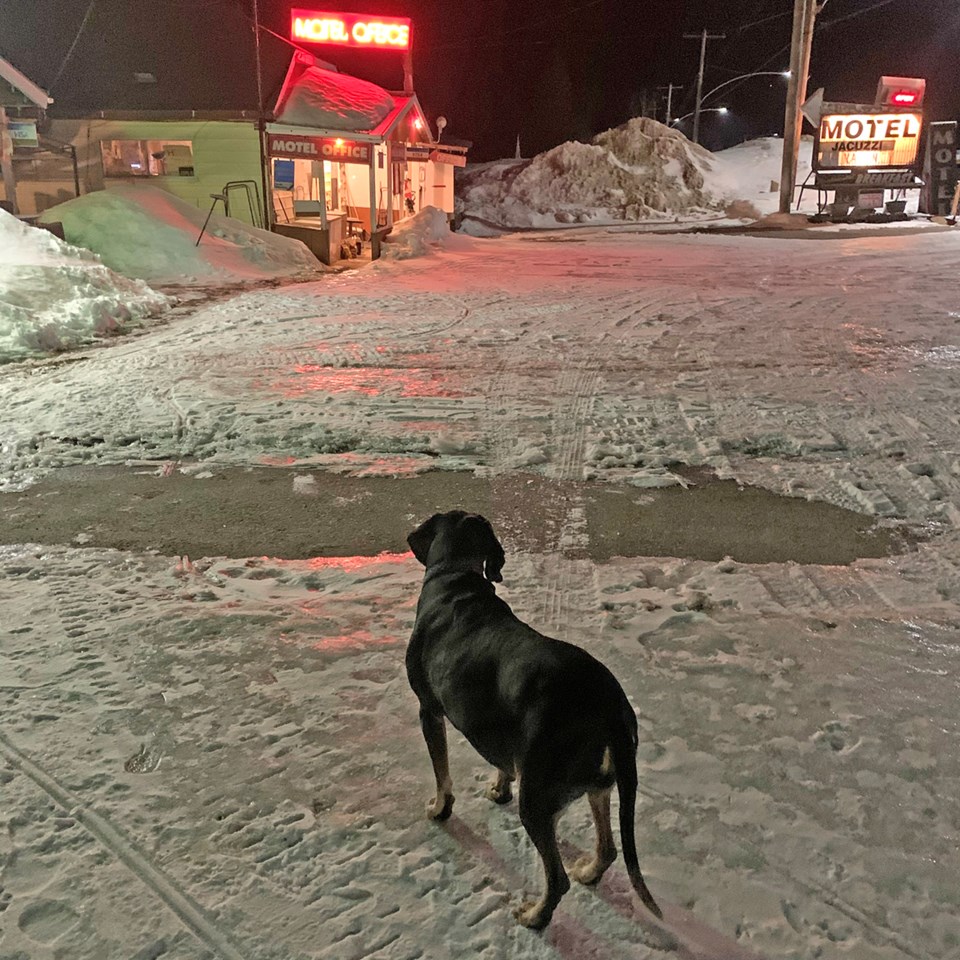 Sue is not fond of wolves howling in the night. Photo Larry Campbell