Sullivan revisited: On drug addiction, mayoral runs and getting doused with Coke

Sam Sullivan was a longtime city councillor before he became mahyor of Vancouver from 2005 to 2008. Photo Dan Toulgoet Vancouver-False Creek Liberal MLA Sam Sullivan launched a campaign Thursday to become the next leader of the B.C. Liberals.
V.I.A.
Sep 25, 2017 8:54 AM 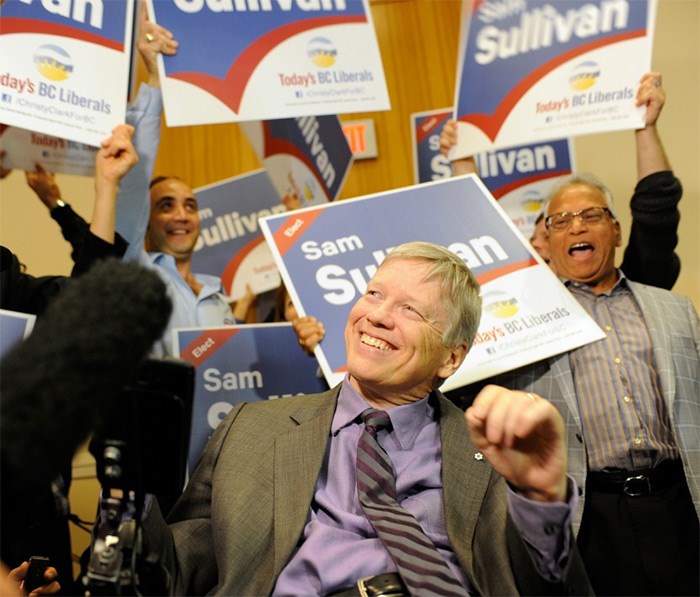 Sam Sullivan was a longtime city councillor before he became mahyor of Vancouver from 2005 to 2008. Photo Dan Toulgoet

Vancouver-False Creek Liberal MLA Sam Sullivan launched a campaign Thursday to become the next leader of the B.C. Liberals.

Prior to entering provincial politics, the 57-year-old Sullivan was a longtime Vancouver city councillor before successfully running for mayor in 2005. He also became a member of the Order of Canada in 2004 for his voluntary service with disabled people, who with Sullivan’s help learned to sail, fly ultralight planes, hike up a mountain on a one-wheeled trail rider, play music and get jobs.

The Courier looked back through the many stories involving Sullivan to come up with some quotes, facts and insight into the man who captivated the world in 2006 at the Turin Winter Games when he waved the Olympic flag from a stage in his wheelchair.

On becoming a quadriplegic:

· In 1979, Sullivan tried to ski through a friend’s outstretched legs, tumbled and broke his neck. He lived on welfare for seven years after a skiing accident in 1979 at Cypress Bowl. "Happened right up there," he said, gazing up at the North Shore mountains during a sailing trip with the Courier in 2004. "Oh yeah, I do think about it out here. Hard to forget. It's a place where my new life started."

On running for mayor in 2005 against Vision Vancouver’s Jim Green:

· In the documentary Citizen Sam, Sullivan referred to Green as a "bully" and "desperate beast." Near the end of the campaign, Sullivan appears on camera saying, "I'm going to keep my foot on his God damn throat and I'm going to just keep pressing." The documentary also revealed Sullivan liked to begin his day with a shot of whiskey.

On getting a two-litre jug of Coke dumped on him at a mayoral nomination race in 2008 from a member of the Anti-Poverty Committee:

· "I wear it as a badge of honour," he told the Courier as supporters and colleagues wiped him off. "It tastes good actually. I was thirsty." He later told reporters that he was glad the APC chose Coke since it was an official sponsor of the 2010 Winter Olympics.

Sullivan’s mother, Ida, in 2005 on her son taking on Christy Clark in the NPA mayoral nomination race, which Sullivan won:

· "He's been a problem solver all his adult life, and I think he's going to do this with the problems of the city. This sounds like I'm being political, but I'm really not a political person. As a matter of fact, I'd like to go to bed and put my blankets over my head whenever it's election time. It's not my kind of thing."

· In 2001 or 2002, Sullivan gave money to Shawn Millar, a community activist, to buy crack cocaine in the Downtown Eastside. He supplied the money to Millar after meeting him for dinner in Chinatown. Sullivan responded to an email from Millar, and wanted to help him launch a bike tour to promote free heroin programs.

"Obviously he was getting very agitated in the middle of our conversation and he was going to leave and I just asked him, 'What's wrong?', and he said, 'I need money for drugs.' I was worried he would go steal something or do something illegal, so I offered him the money. Then I figured I was there to learn, so why don't I learn how he does it."

Millar bought crack cocaine, which sold for $10 a rock, while Sullivan waited in his van at Columbia and Hastings. Once the deal was done, Millar smoked the crack inside Sullivan's van.Millar left to buy more drugs with money from the councillor because Sullivan didn't witness the first transaction.

"He went out of the van and went up the street and I just observed him," Sullivan said. "Where we were, drugs were blatantly and openly being sold and consumed. It was quite shocking what was going on."

In a more expensive harm reduction experiment, Sullivan gave a 20-year-old prostitute $40 a day to buy heroin for three weeks. The incident occurred in the late 1990s when Sullivan lived in Collingwood. He said he wanted to prevent the woman, who was selling sex outside a convenience store in his neighbourhood, from doing sex trade work to feed her habit.

"This was a young woman who had a mother that loved her in Calgary. I had become very angry with a society that would let this lovely young woman degrade herself because our morals wouldn't allow us to accept where she was and help her try to move past it without destroying her life in the process."

On his relationship with Christy Clark when she was premier:

· “It was a good relationship. I respect the process that determines leaders, and the leaders set the priorities. This is the wonderful thing about having a leadership process – is that they’ll be a new leader and it’s natural that there will be a new set of priorities. I think it’s exciting.”

On seeking the leadership of the B.C. Liberals:

· “I’ve been thinking about for a while. The reality is, the only time you can really present these controversial and difficult ideas is during a leadership race.”