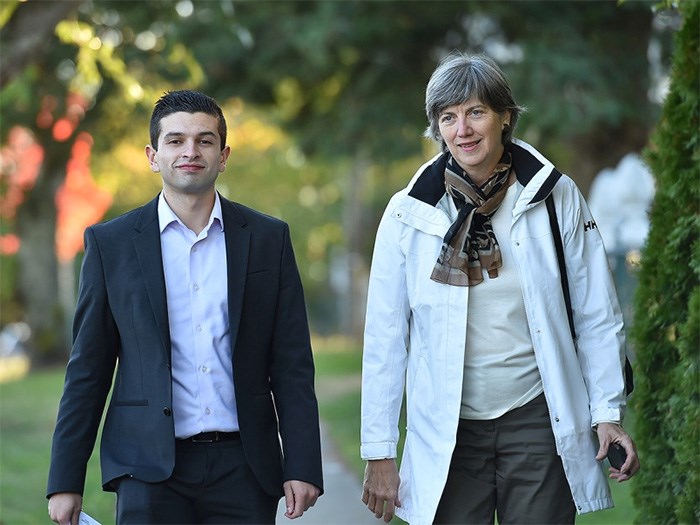 When I started writing this quasi-column years ago, my aim was to provide more analysis than opinion of what's going on at city hall.

I would say I've managed to do that.

Over the years, I've provided facts, quotes, statistics, context and mixed it with a wee bit of sarcasm and humour to get people who are otherwise bored by civic government to lock in for a few minutes.

I tell you this because I'm going straight to the opinion this Sunday morning, as I clear the sleep glue from my eyes after a long night of covering Saturday's byelection.

You probably heard that the NPA's Hector Bremner is Vancouver's new city councillor. You also probably heard Vancouver has a new board of nine school trustees, a year after the previous board was canned by the then-Christy Clark government.

What you didn't hear is what Vision Vancouver's council candidate, Diego Cardona, thought about the results. He was, after all, representing the party that has been in power at city hall since 2008.

Maybe some of you could care less.

But as a reporter who has covered Vision since it launched as a party way back in 2005, I care a great deal about getting access to candidates and politicians, no matter what the issue or news of the day.

As my colleague Allen Garr quite accurately pointed out in our phone conversation this morning, Vision hid from the media byelection night because they knew the good ship Gregor was heading for the rocks.

A few days ago, I heard from Vision's communications director Paul Nixey that the party would not have a public get-together. Which, in my opinion, was bullshit.

The party has always opened its election night gatherings to the public and to media. Come interview the winners! Listen to our rhetoric! Take photos of us smiling! Can I get you a beer?

The reason I was given for "the private affair" had something to do with the party wanting to spend the money on the campaign and not on an election night party.

Nixey told me to phone him Saturday night and he would put me in touch with Cardona. But what about a photo of a smiling Cardona when he wins?

A Vision photographer would be on hand at the clandestine location and provide us with a photo. What a joke. So hence the photo of Cardona our photographer Dan Toulgoet took Friday — the one at the top of this piece — to run with the Courier's byelection coverage.

I found out via Twitter Saturday night that Vision was at the Coast Plaza Hotel in the West End. I texted Nixey thinking the party had changed its mind and was now offering up candidates to the media. He texted me back to tell me it was still a private affair.

About an hour later, the results showed Cardona was heading for a disastrous fifth-place finish and the party would be lucky to win three of nine seats on the school board.

I sent Nixey a text, followed up with a phone call. No response, no Cardona. I had already interviewed Bremner at the Century Plaza Hotel on Burrard Street, drove up to the Greens' public function at a restaurant in Mount Pleasant to speak to Pete Fry and Adriane Carr, then returned to my desk to do a quick phoner with Jean Swanson.

As I was about to file, I got a call from Nixey. Great, I thought, I'll work Cardona in and take out the canned statement from the mayor, which was emailed to all media.

But Nixey told me Cardona had just given a rousing speech — to whom I don't know — and then went home. He offered me re-elected Vision trustee Joy Alexander as a consolation prize.

I declined the offer.

Nixey, I assume, was doing what he was told. He was a loyal soldier. Cardona was obviously following orders, too.

Too bad, because I found Cardona to be articulate and on top of the issues when I spoke to him a couple of times over the campaign.

This loss isn't on him, it's on a party that heard loud and clear Saturday that voters don't like what Vision stands for — or doesn't stand for — anymore.

Maybe I'm getting ahead of myself with that statement because only 11 per cent of voters bothered to cast a ballot. Maybe Vision's base will show up in the next general election in October 2018 and celebrate with a big public party.

Who the heck knows.

All I wanted Saturday was an interview and a photo.