The NPA’s Hector Bremner won the Oct. 14 byelection to become a city councillor. Elections BC documents released Monday show how much he and other candidates spent in the race.
V.I.A.
Jan 16, 2018 1:12 PM 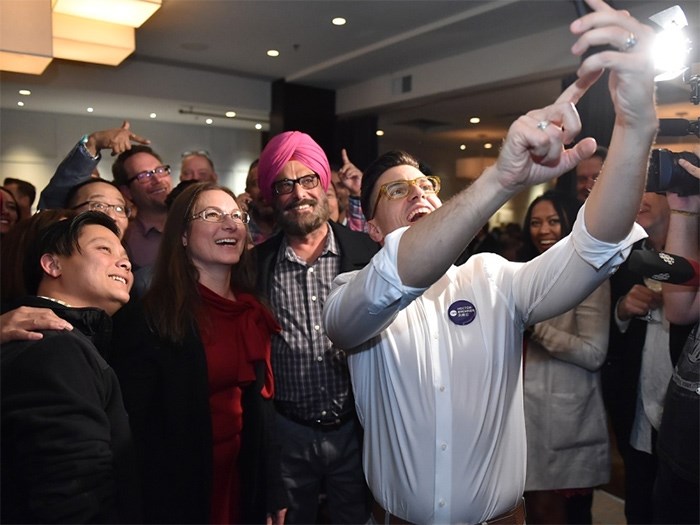 The NPA’s Hector Bremner won the Oct. 14 byelection to become a city councillor. Elections BC documents released Monday show how much he and other candidates spent in the race. Photo Dan Toulgoet

So after three months of waiting, we now know how much the NPA's Hector Bremner raised and spent to get elected to council in the Oct. 14 byelection.

Elections BC posted Monday the financial disclosure documents of all candidates, parties and "third party sponsors" such as the Vancouver Secondary Teachers' Association and Socialist Alternative Vancouver.

Warning: Reading these documents is not straightforward. For example, Bremner's personal disclosure statement says he didn't raise or spend a dime.

But when you review the NPA's statement, which indicates Bremner was its council candidate, that's where you'll find the money.

The party raised $100,012 on Bremner's behalf and spent $78,965. It also spent $20,703 — I assume this is the leftover cash from the Bremner campaign — to get Fraser Ballantyne and Lisa Dominato elected as trustees.

Where did the party get its money?

More than $20,000 came from individual donors, including a $10,000 donation from Canaccord Genuity Group founder Peter Brown and his wife, Joanne.

During the campaign, Bremner suggested to the Courier Vision would spend $600,000 to $800,000 on its campaign, which was way off, according to Vision's disclosure statements.

Like Bremner, Vision's council candidate Diego Cardona did not declare any fundraising or spending in his personal document. But the party said it raised $278,125 and spent $257,838 on behalf of Cardona.

For its school board candidates, Vision spent $180,487 to get Allan Wong, Joy Alexander and Ken Clement back on the board, which was fired in 2016 for not balancing its budget.

Where did Vision get its money?

A total of $29,400 came from unions (the Vancouver Taxi Association gave $10,000) and $26,225 from individuals. All that money, however, could not get Cardona elected. The rookie candidate finished a disastrous fifth.

Runner-up to Bremner, the independent Jean Swanson, raised and spent $43,041, with most of her money coming from small donations. Some of it was in the $1,000 range from people such as Rider Cooey, Karen Gilchrist, Earle Peach and Peter Greenwell.

The Greens' three school board candidates, Janet Fraser, Judy Zaichowsky and Estrellita Gonzalez, all won seats after raising and spending $26,164.

OneCity also ran two school board candidates, Carrie Bercic and Erica Jaaf. Their campaign raised $26,956 and spent $23,699, which was enough to get Bercic elected.

The contest was the last one where candidates and parties could raise and spend as much as they want. New campaign finance rules are in effect for this October's civic election.

Developers and unions are banned from contributing to campaigns and the maximum donation from an individual to a candidate or party is $1,200.

The new rules mean that in communities with a population of fewer than 10,000 people, the expense limit will be $10,000 for mayoral candidates and $5,000 for all other candidates.

In a community that has more than 10,000 people — that would be Vancouver and its population of about 650,000 — expense limits will be determined using a per capita formula.

I still haven't had a chance to do the math but suffice to say no party will spend north of $2 million this time around. That said, I've heard complaints about spending loopholes in the new legislation.