Vision Vancouver got trounced in the byelection

If tonight's byelection result was any indication (and it was), Vision Vancouver is going to be pushing a rock uphill in the election that really matters next November.

If tonight's byelection result was any indication (and it was), Vision Vancouver is going to be pushing a rock uphill in the election that really matters next November. The NPA's Hector Bremner handily won the council seat left vacant by Vision's Geoff Meggs who left to work for Premier John Horgan as his Chief of Staff, and Vision's rookie candidate trailed behind 4 candidates, proving that Vancouver just might be done with the ruling party.

Vision's candidate Diego Cardona was favoured to at least be in the top 3 but got ranked 5th after all the votes were counted. Splitting the vote above him were duelling anti-poverty advocates, independent candidate Jean Swanson (2nd most votes) and One City's Judy Graves (4th), who might have been the same candidate if you were the average voter who wasn't looking very close. If only one of them would have run perhaps they could have gathered all of the votes of the other, beating out Bremner. In the splitting mix was also Pete Fry (3rd) who is riding that Green wave which could turn into a tsunami in 13 months. 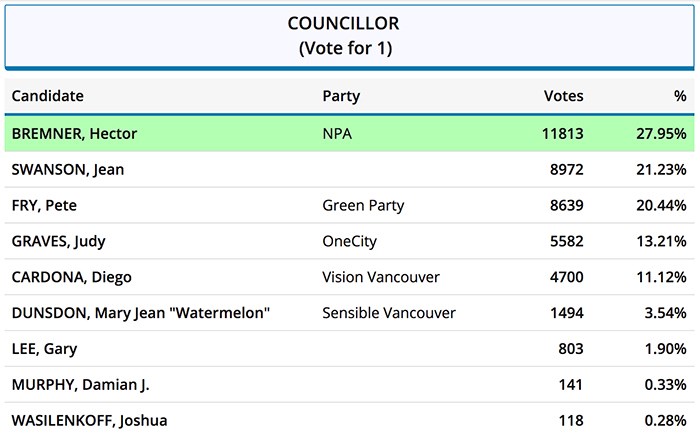 The school board, which is returning after being fired by the provincial government a few months back, is once again not a majority for any party. The Greens hold 3 seats, Vision has 3, the NPA has 2 and One City has 1. And it should be noted that the candidate running who was the only one named as being responsible for "ambient bullying" on the school board, Vision's Mike Lombardi, did not get re-elected. Most of the others who got fired and placed their names back on the ballot got their jobs back. The question of "who does the public think the bullies were?" might have been murky leading up to today but perhaps we can consider that case closed now.

Given the council seat loss it's going to be interesting to see if Gregor Robertson decides for run for mayor again, as he's repeatedly said he plans to do. Don't be surprised if Raymond Louie and Andrea Reimer are battling for the opportunity in the coming months, attempting to salvage the image of a party who may be past its prime, and who many feel own the affordability crisis.