Finalizing how many Vision Vancouver incumbents will seek another term in this fall's election will be determined Monday at the party's annual general meeting.
V.I.A.
Jan 12, 2018 2:40 PM

Finalizing how many Vision Vancouver incumbents will seek another term in this fall's election will be determined Monday at the party's annual general meeting.

Maria Dobrinskaya, the co-chairperson of the party, said members will learn about Vision's nomination process and how many incumbents on council, school board and park board will run.

Mayor Gregor Robertson announced Wednesday that he will not seek re-election, leaving the party without a leader who has been its face and ambassador for almost 10 years.

The next day, longtime city councillor Tim Stevenson announced he won’t seek re-election, saying in an email to the Courier that “I believe it is the right time to leave to allow Vision Vancouver to bring in a new generation of leadership.”

Coun. Andrea Reimer, who was popular with voters first as a school trustee (with the Green Party) and then as a councillor (with Vision), announced in October that she, too, won't run again.

Coun. Kerry Jang told the Courier in an email last week that he made a decision but will leave it up to the party to make it public. Dobrinskaya refused to reveal Jang's decision.

So far, only councillors Heather Deal and Raymond Louie have said they will seek re-election. But with Robertson leaving, Louie said Wednesday he will take a few days to consider whether he wants to seek the party's mayoral position.

"Over the last several weeks, we've been trying to have conversations with a number of them and get a clear understanding of where everybody's at," she said. "We've also been waiting for Gregor [to make a decision], frankly. There's a number of decisions at the party level that have been in a little bit of a holding pattern."

Vision also has to determine whether its three incumbents on school board – Ken Clement, Joy Alexander and Allan Wong -- and park board commissioner Catherine Evans will seek re-election. 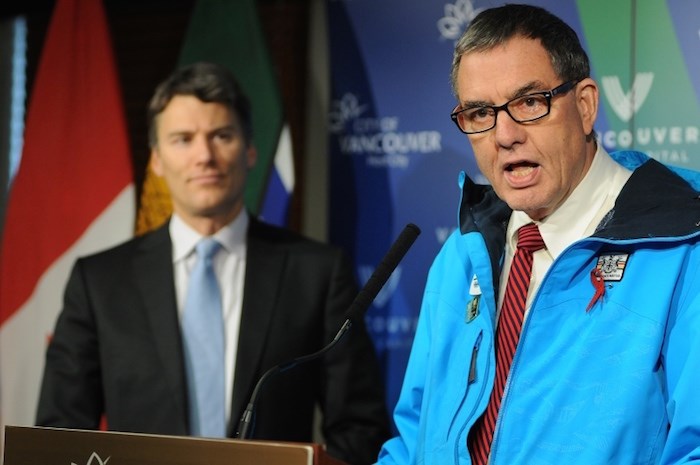 Dobrinskaya acknowledged the once powerful party, which won three consecutive majorities on council dating back to 2008, is in "significant transition on a number of fronts."

Driving part of that transition are new campaign finance rules that ban union and corporate donations, which helped fund the multi-million dollar campaigns of Vision.

Vision repeatedly pushed for campaign finance reform and the party is happy it will be in place for this year's election, Dobrinskaya said.

That said, she added, the new rules coupled with longtime incumbents leaving have forced the party to do "a re-think on the way that we conduct ourselves."

Vision has never run a full slate of 10 council candidates and expects to do the same in this October's election. In previous campaigns, the party has struck deals with COPE that saw its candidates endorse Robertson for mayor.

The results of the Oct. 14 byelection for a council seat left vacant by former Vision councillor Geoff Meggs indicated that voters wanted a variety of voices and parties at city hall.

Robertson told the Courier Wednesday that he wants to see a healthy mix on council. It will be up to party leaders in the months ahead to decide what that looks like, he said.

"We always leave space for other parties and hope to work on a shared agenda for our key priorities on housing and transit and reconciliation and greenest city," the mayor said. "We've been very clear on our priorities and we've had strong working relationships with the Greens and COPE, historically."

Stevenson, who served five years as an NDP MLA and is in his 16th year as a city councillor, said he accomplished “much of what I’d hoped and worked for, particularly with the LGBTQ community.”

“Vision is a strong, dynamic, progressive party, but every party needs renewal, and Vision is no exception,” he said. “I have loved my years as a Vision councillor in our wonderful city, but it is my time to go, to help facilitate the Vision renewal. I will always look back with gratitude for the honour of having served for 16 years on council.”