More low- and middle-income affordable housing on its way across B.C.

Housing Minister Selina Robinson, who is also responsible for municipal affairs and Translink, spoke to delegates Wednesday at the Union of B.C. Municipalities conference at the Vancouver Convention Centre.
Joannah Connolly
Nov 13, 2018 2:45 PM 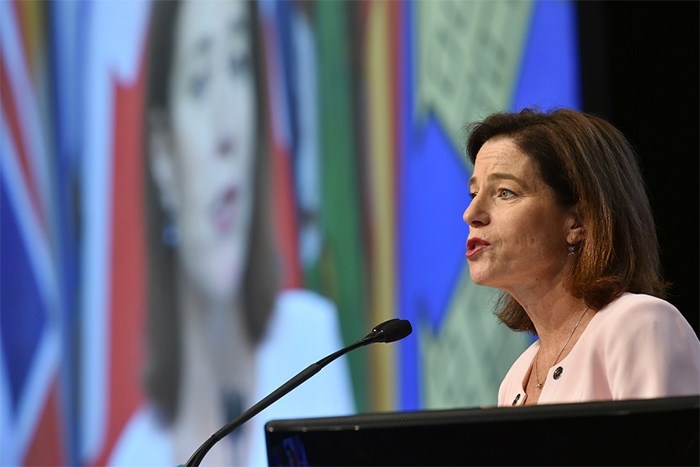 Housing Minister Selina Robinson, who is also responsible for municipal affairs and Translink, spoke to delegates Wednesday at the Union of B.C. Municipalities conference at the Vancouver Convention Centre. Photo Dan Toulgoet

The province’s affordable housing program will fund the construction of 4,900 new mixed-income rental units in 42 communities across the province, the B.C. NDP government announced at a media conference November 13.

The 4,900 homes will be built under the provincial government’s $1.9 billion Community Housing Fund, which aims to build a total of 14,000 affordable rental homes over 10 years. This in turn is part of the province's 10-year commitment to build 114,000 affordable homes for British Columbians, which also includes social housing, supportive housing, shelter homes, student housing and owner-purchase units.

This initial set of affordable rental projects, which has already gone through a request-for-proposals process, will be built by non-profit housing and co-ops over the next two to three years, according to the province. The 4,900 homes will cost the province around $492 million of its $1.9 billion fund.

Patrick Buchannon, executive director of New Chelsea Society, said, “Founded by veterans of the Second World War, New Chelsea Society is a non-profit housing society that has been providing housing with heart in the Lower Mainland for low- and moderate-income seniors, families and persons with disabilities for over 65 years. We are very proud to be partnering with the Province and the City of Vancouver and are thrilled to have been selected to receive the funding to build a new 102-unit affordable housing project for seniors and families on Southwest Marine Drive in Vancouver.”

The other Vancouver projects are:

• $18.1 million to Brightside Homes – 181 homes for individuals, families and seniors;

• $3 million to the Kettle Society – 30 homes for seniors with mental health challenges;

• $16.9 million to Vancouver Community Land Trust – 169 homes for people with HIV and AIDS and families and seniors; and

A full list of the first set of approved affordable housing projects across B.C. can be found here.

Selina Robinson, Minister of Municipal Affairs and Housing, said, “People and businesses are struggling under the weight of the housing crisis in B.C. Through the Community Housing Fund, we are building housing so that growing families, aging seniors and low- to moderate-income individuals can afford homes in the communities they live and work in. These new homes will have life-changing impacts for people and communities right across the province.”