There is a new term bandied about now in Vancouver’s long-suffering rental housing market as developers and landlords attempt to meet tenant demand in a city with the highest rents and the lowest vacancy rates in the country. 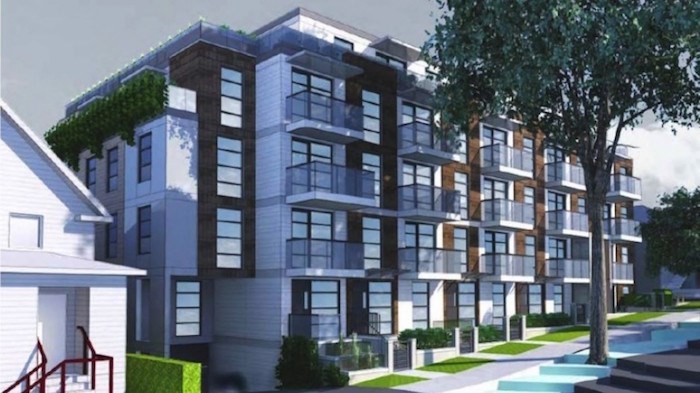 Submitted for rezoning in May 2018, this 35-unit rental project on Grant Street in Vancouver is still before city council, with the next public hearing set for September 12, 2019. Image courtesy Stuart Howard Architects Inc.

The term is “CAVE people,” which is an acronym for “citizens against virtually everything” in relation to the difficulty in getting new market rentals built, bought or renovated in a city where the bulk of the purpose-built rental stock was completed when baby boomers were toddlers.

The CAVE, rental developers say, extends from the streets to city halls.

In June, Vancouver city council voted down the rezoning of a single-family lot in the exclusive Shaughnessy neighbourhood for a 21-unit rental project, citing local residents’ objections, though the project would have offered lower-than-market rents and had the support of the planning department.

A proposed 35-unit rental housing project in the Grandview-Woodlands area, where the first rezoning request was presented to the city in May 2018, is now into its fourth design change. The rental units have already been scaled back and city council recently referred the rezoning application to September 12 – 18 months after it first introduced.

Yet there is no guarantee the project, being stick-handled by Stuart Howard Architects Inc. for Brittania Ridge Developments, will ever be built. Locals opposed to the building said it fails to conform to the neighbourhood’s character during a series of public consultations.

If the project is ever approved, Britannia Ridge could be on the hook for thousands of dollars in compensation to tenants displaced by the new rentals.

The result of the delays and the increased tenant protection is that new rental construction in the City of Vancouver has fallen 29% in the past two years, noted Mark Goodman, co-author of the Goodman Report and a multi-family real estate specialist with Goodman Commercial Inc.

According to Goodman, a total of 7,587 rental units are under construction, approved or proposed for Vancouver, but he doubts all will be delivered.

In Vancouver, “the permit process takes longer than the actual construction,” Goodman said, noting that some developers have already withdrawn applications for new rental projects.

Policy and politics are also playing havoc with the purchase and renovation of existing Metro Vancouver rental apartment buildings, which have an average age of 61 years, according Goodman and LandlordBC president David Hutniak.

Sales of Metro Vancouver rental buildings plunged 50% in the first half of this year, compared with the same period a year earlier, while average prices decreased 26% in Vancouver and 20% in the suburbs, the Goodman Report stated. Total dollar volume for rental apartment building sales fell to $529 million, down 62% from $1.38 billion through the first six months of 2018.

Hutniak is not surprised that rental investors are pulling back, in spite of high rents and lower vacancies. He noted that the B.C. government has capped allowable annual rent increases to 2.5% this year, but in the City of Vancouver property taxes on rental apartment buildings have increased 25%, water system costs have risen 9.7% and BC Hydro passed a 2019 rate increase of 6.85% this spring.

Rental and development barriers have spread throughout Metro Vancouver, according to commercial agency CBRE. It notes in a recent report that Port Coquitlam is moving toward “eliminating and pre-emptively preventing” landlords from displacing tenants during renovations.

New Westminster is implementing a bylaw that would restrict city-owned land and even existing condominium buildings to rental-only zoning.

Burnaby City Council recently implemented Rental Use Zoning that requires that any new development include rental housing. The plan also requires developers to replace every rental apartment they demolish in a redevelopment on a one-to-one basis.

And those Burnaby replacement apartments would have to be rented out at affordable rates, defined as 20% below the rental market average. Displaced tenants would also be given the first opportunity to move into the new apartments once they’re complete.

“How can anyone continue to operate a purpose-built rental building in the face of all this?” Hutniak asked.