Close to half of Vancouver condos aren’t occupied by owners

Forty-six per cent of Vancouver condos are "not-owner occupied," according to the latest analysis by Andy Yan, director of Simon Fraser University’s city program.
Jun 17, 2019 7:13 AM By: Naoibh O’Connor

The percentage of not-owner occupied condos hits 49 per cent in Electoral Area A where the University of B.C. is located. 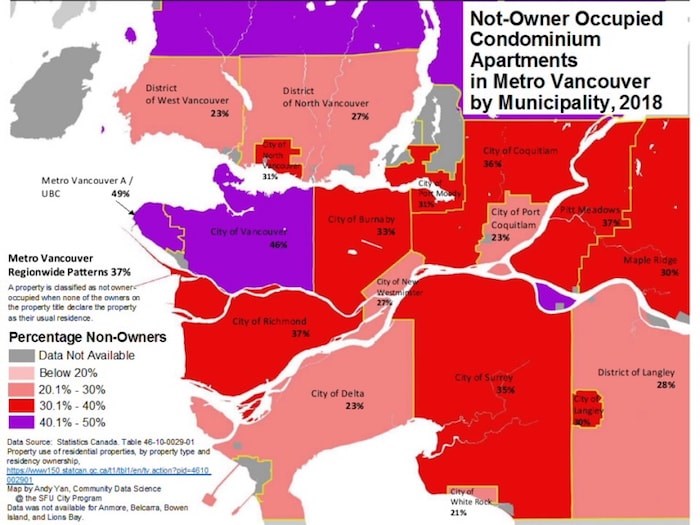 A property is deemed “not-owner occupied” when none of the owners on the property title declare it as their usual residence, according to tax data or other administration data. The property may be rented out or used as a secondary property by its owners, such as a pied-a-terre or a cottage, or it may be vacant.

A property is classified as “owner-occupied” when at least one owner on the property title declares the property as their usual residence.

“The big take on this [data] is the role of units that are not owner-occupied — a.k.a. investments,” Yan said. “How much that drives, particularly the condominium market, in Metropolitan Vancouver.”

While the percentages are particularly notable in Vancouver and Electoral Area A/UBC, Yan said they also reveal how important condos-as-investment-units are in other municipalities throughout the region.

In Toronto, the figure sits at 38 per cent. 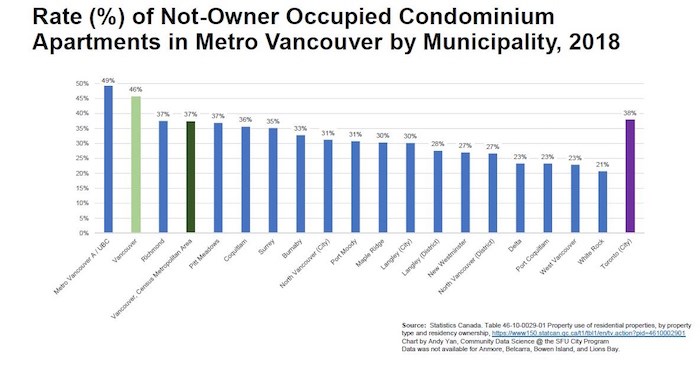 While some of the condos may be seasonally occupied or empty, Yan said the good news is that some are rented out.

The statistics, he added, also point to the importance of regulating short-term rentals.

Yan was surprised Vancouver’s city-wide figure for not-owner occupied condos has grown to 46 per cent.

He noted it’s the 10th anniversary of the empty-condo study he did with BTAworks in 2009, which found that about 52 per cent of downtown condos were investor-owned. A City of Vancouver report, which was published a couple months after that study, revealed the city-wide figure at that time was about 35 per cent.

“So things became progressively worse, and we knew [about it] 10 years ago,” he said.

“It illustrates the types of demands that are in Vancouver housing and really goes into the question of what’s the priority in demand that our housing system needs to meet — investments versus, say, someone who’s trying to set their roots in the city, not to mention the importance of actually having an affordable purpose-built rental stock as opposed to one that’s dependant on this kind of fragmented, precarious condominium-as-rental system.”

Meanwhile, the median assessment value of owner-occupied condominiums in Vancouver is $696,000 compared to $650,000 for not-owner occupied condos.

When it comes to single-detached homes in Vancouver, 19 per cent are not-owner occupied, a figure that jumps to 47 per cent in Electoral Area A/UBC.

The median assessment value of owner-occupied single-detached houses is $2,250,000 compared to $2,370,000 for not-owner occupied houses.

Looking at all residential property types — single-detached homes and condominiums — 34 per cent are not-owner occupied in Vancouver.

The median assessment value of all residential properties in the City of Vancouver that are owner-occupied is $1,410,000, compared to $875,000 for ones that are not-owner occupied. 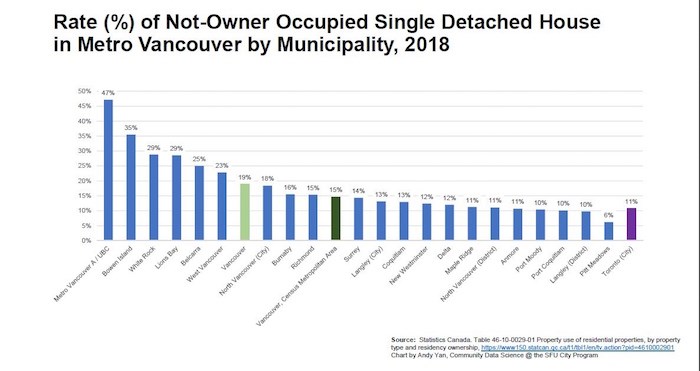 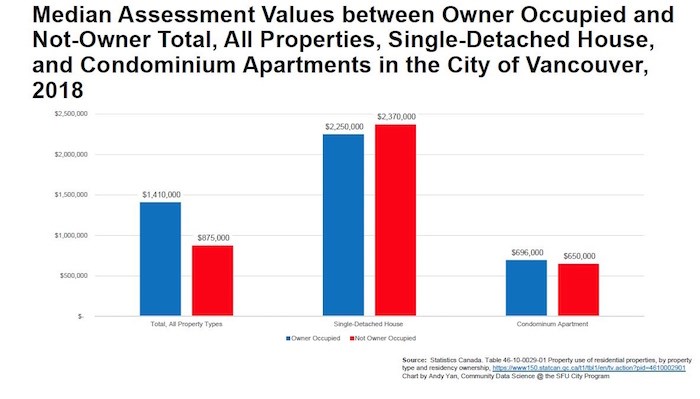