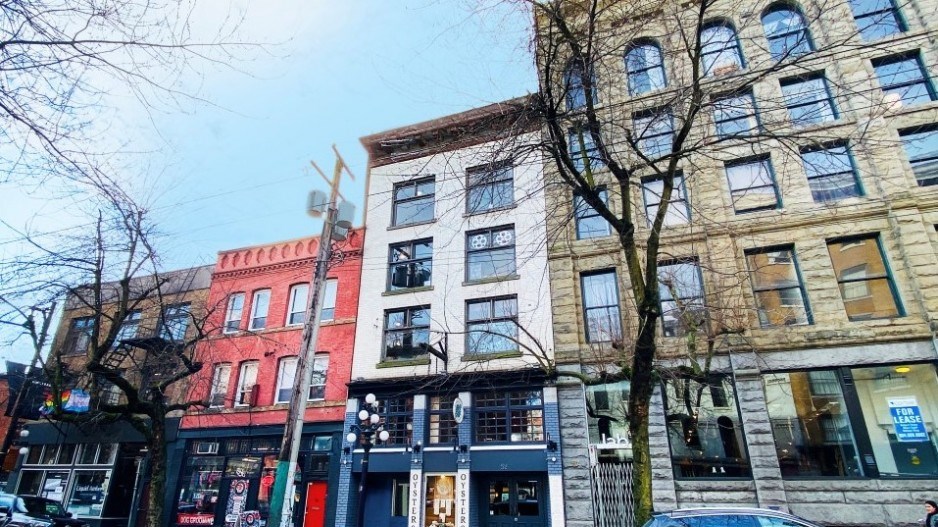 52 Powell Street sold for $8.1 million in April, more than $1.3 million above its assessed value. Photo submitted

In April, when Toronto-based Allied Real Estate Investment Trust bought a 115-year-old office building at 375 Water Street for an estimated $225 million – nearly $100 million above its assessed value – it marked the largest sale in what has become a real estate rush into Vancouver’s notorious Downtown Eastside (DTES).

The sale of the Landing, where the land value is assessed at $111 million, is an indication that, despite its reputation as an open drug market and a no-go neighbourhood rife with crime and poverty, real estate investors are willing to pay prices that rival values anywhere in the city.

Real estate agents working the DTES zone say that conditions, already bad, have become remarkably worse since COVID-19 began. The spread of graffiti, garbage, discarded needles and the homeless “is bleeding” from its Main and Hastings core west towards Burrard Street, east to Strathcona – where a large and apparently permanent tent encampment has set up – and north to the Railtown area on the waterfront.

“Japantown is a gong show,” said Marc Saul, of Corbel Commercial Inc. – which has sold more than $25 million worth of DTES real estate in the past 18 months –in referring to an historic neighbourhood where a large homeless camp at Oppenheimer Park was dismantled by Vancouver Police in May.

But Saul and partner Robert Tham say the DTES is attracting both large real estate developers and altruistic buyers, all aiming to fix Vancouver’s most broken neighbourhood, despite getting little help from the City of Vancouver.

“It is the worse down here now than it has ever been,” Tham said, noting that, since COVID began he often has to bribe itinerants to leave doorsteps when trying to show a listing.

Police, he said, apparently turn a blind eye to drug deals and property crime that would not be tolerated anywhere else.

Tham added that city zoning and red tape stifle new businesses and higher density that could turn the zone around.

In the city’s Downtown Eastside/Oppenheimer Park (DEOD) area, where Japantown once thrived, any new housing development is restricted by height, and requirements that one-fifth of any new apartment building must be social housing.

Saul said the city has turned down applications for new barber shops, boutique retailers and even art galleries in the DEOD as city officials claim they required a change of use that can take nine to 18 months to approve.

“It seems the city is trying to deter new businesses,” Saul said “But store owners keep the street clean in front of their building and bring life and hope to the area.”

An example of the long process to get anything built in the DTES is a mixed-use development now under construction by Westbank Corp. and BC Housing at 34 West Cordova Street near the corner of Abbot Street.

The 10-storey project will include 80 social housing units and 62 market rental apartments behind an historic façade. Approved in 2017 after a year of controversial debate, it will not open until 2022. The rear of the project will include the first new retail in Blood Alley, the focus of a city planning process that started more than 10 years ago.

But a long view of the DTES reveals the bones of a property resurgence: it is framed by waterfront and the downtown and, at Strathcona, on the border of the False Creek Flats, where the Emily Carr University of Art and Design is already built and the $1.9 billion St. Paul’s Hospital is scheduled to start construction this year.

“It is safe here, for capital,” Tham said, though he added that a number of buyers have a philanthropic rather than a financial incentive.

An example is the 26-room Shamrock Hotel, at 635 East Hastings, which Vancouver business executive Angena Kalhar bought in January for $3.5 million, a price nearly half-a-million dollars above its assessed value.

Built in 1912, it has been renovated into single-room-occupancy (SRO) accommodation and is fully rented to local workers and artists who can afford the $700 a month rents.

Kalhar, president of KTL Transport Inc., has donated the Shamrock’s downstairs floor to the Union Gospel Mission to run their services for women and children until the mission’s new premises are built in a year or so. When the mission no longer needs the space, it will continue to serve the local residents, who Kalhar described as among the most vulnerable in the city.

“Purchasing this building is an opportunity for [my family] to give back to the community,” she said.

Recently, Tham said, a retired Japanese-Canadian businessman approached him about buying an old building in Japantown to reclaim part of its history.

Rigid city development rules, however, are a boon to investors in SROs and other commercial property, Tham noted, because there is no new competition.

The two-storey Abrams Block in Gastown, said to be one of Vancouver’s first commercial buildings, sold last October for $10.8 million, or nearly $1,000 per square foot. In April, Corbel also sold 52 Powell Street, a 110-year old, 10,284-square-foot office building, for $8.1 million, more than $1.3 million above its BC Assessment value.

Corbel recently listed 41 West Pender Street, a graffiti-scarred building that currently houses an old warehouse on its 6,000-square-foot lot. Rare in the area, it has a development permit in place for a 40,000-square-foot mixed-use building with commercial space and 16 units of market rentals.

At an asking price of $14.2 million, the per-square-foot buildable value is not much different than real estate prices on Vancouver’s upscale west side. Tham said investors are not blind to the future potential if they can improve Vancouver’s oldest and most challenging neighbourhood.

“At the end of the day, our buyers are looking for return.”