Since the fortunes of the Metro Vancouver region’s housing market have reversed, so has the number of realtors, according to a new study.
Joannah Connolly Oct 3, 2019 2:41 PM

Now, since the fortunes of the region’s housing market reversed, so has the number of realtors, according to a new study by real estate marketing firm Roomvu in collaboration with UBC Sauder School of Business. 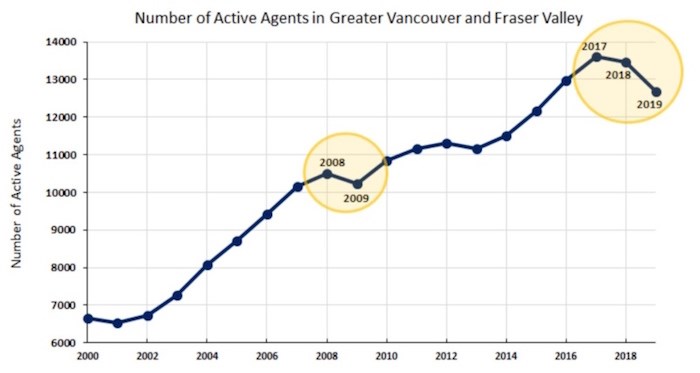 The researchers found that there were fewer than 7,000 realtors operating in Greater Vancouver and the Fraser Valley in 2000. By 2017, that number had doubled to more than 13,500, with numbers increasing each year apart from small drops during the financial crises of 2001 and 2008. This increase was much more extreme than the rise in general population (see graph below).

Sam Mehrbod, CEO of Roomvu and a realtor in Greater Vancouver, said that this increase correlated with the region’s booming housing market.

“Cities like Vancouver, where housing is expensive, have a higher number of realtors than cities like Halifax, for example,” said Mehrbod. “As home prices go up, so does the financial incentive to take advantage of higher commission prices.” 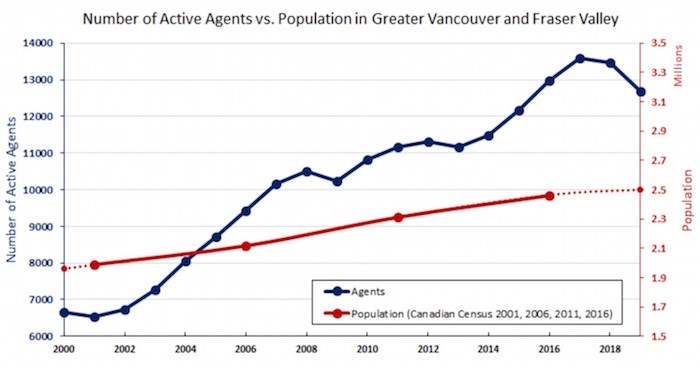 Over the past two years, since the real estate market began its downturn, the number of agents has been dropping, according to the study — thus far by approximately 1,000 agents.

The report said, “The year 2018 saw the introduction of several federal, provincial and municipal measures to curb housing prices. The B20 [mortgage] stress test, empty homes tax, foreign buyers tax, speculation tax, provincial school tax, limits to, and taxes on, short-term rentals, have all had a decided impact on the housing market in 2018, 2019.”

Mehrbod said, “As the number of transactions fall, many realtors start to give up their licenses, since the fees associated with keeping the license start to outweigh the revenue generated by being a realtor This was evident in 2018, and our data predict that this trend will continue into 2019 and beyond.”

The report authors added, “The data doesn’t necessarily suggest a mass exodus from the realtor market, or at least, not yet. Perhaps the decline in the number of realtors is simply a market correction, much like the correction in home prices.” 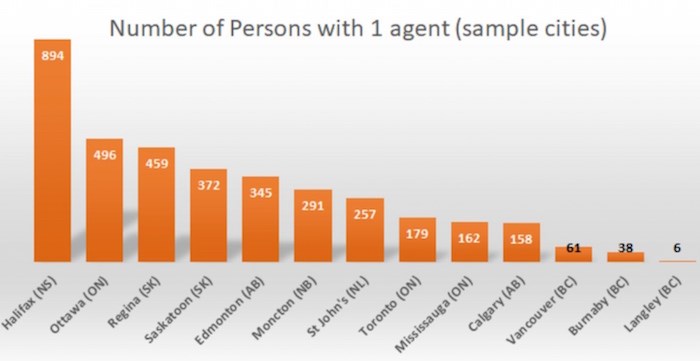 Roomvu has also studied the number of realtors per capita in major cities. Langley, B.C., was found to have the most agents, with one realtor for every six residents. Burnaby had the second highest at one agent per 31 people, and Vancouver proper was in third with one agent for every group of 61 residents. This compares with cities such as Ottawa, where there is one agent for 496 residents, and Halifax, where a whopping 894 residents have to share one agent.