How a project of this magnitude doesn't cross one's radar (mine) until a couple of weeks before it's 799 million dollars in and has almost been completed can really only be attributed to the fact that they (I) don't leave the city center all that much, except to head up the Sea to Sky, North into the wilderness or South towards the airport. 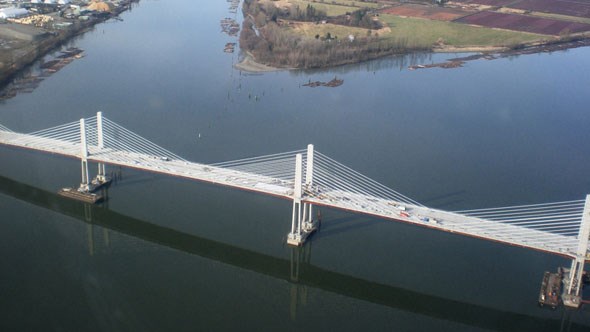 This massive bridge's construction began in summer 2006 and is opening early (in mid June), and from what I gathered from the bridge's very own web site it "will provide a vital new link between communities on the south side of the [Fraser] river—Langley and Surrey—and the north side communities of Maple Ridge and Pitt Meadows... studies conducted for TransLink show that the new bridge will have major long-term impacts on the region, improving travel times and promoting economic activity... the project connects the Trans-Canada Highway in both Surrey and Langley (on the south side of the Fraser River) with the Lougheed Highway (Highway 7), 128 Avenue, and the new Pitt Meadows Airport Way on the north side of the river... construction of the new bridge and road network has created more than one billion dollars in economic activity and 6,500 person years of employment."

Undoubtedly awesome for the Lower Mainland.

Here's a bunch of other fun facts...

* The Golden Ears Bridge is a 1 km, six-lane bridge that spans the Fraser River

* The project includes the construction of 16 bridges, ramps and viaduct s including the main river bridge

* The project includes more than 3.5 kilometres of structures -- ramps, viaduct s, minor bridges, and underpasses -- in addition to the main bridge

* More than 13 kilometers of mainline roadway have been constructed, much of which is being landscaped

* The Golden Ears Bridge and associated road network is scheduled to open by June 30, 2009

* The project is providing an estimated 6,500 person-years of employment

* Economic forecasts produced before construction predicted that the bridge will facilitate the opening of more than 700 new businesses in Maple Ridge, Pitt Meadows, Surrey and Langley

* The main bridge has 2-metre-wide cycling and pedestrian pathways on each side of vehicle traffic, protected by a concrete barrier

* The main bridge pathways are part of the Trans-Canada Trail

* More than 10 kilometers of new pathway will be built in Surrey and Pitt Meadows with connections to existing trail networks in Langley, Pitt Meadows and Maple Ridge

* TransLink has concluded a 35.5-year agreement with the Golden Crossing General Partnership to finance, design, build, maintain and rehabilitate the bridge and main roadway. The Partnership is owned by Ontario-based Bilfinger Berger Project Investments Inc. 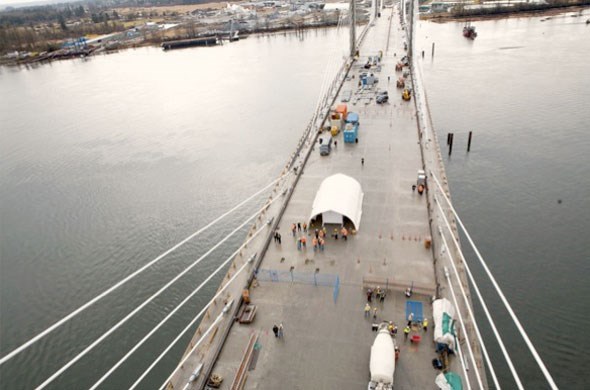 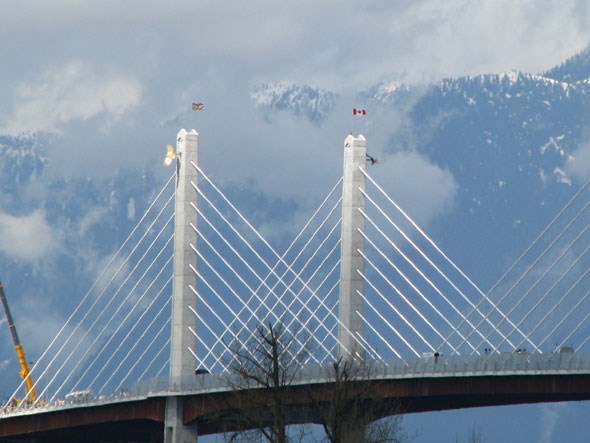