Last weekend I had the pleasure of taking the Vancouver125 Public Art and Murals bike tour, celebrating mural artworks created for Vancouver’s 125th anniversary and through the Great Beginnings program. Richard Tetrault was present to give an in-depth look at the enormous mural on Hastings Street, Through the Eye of the Raven, and I was able to feature preliminary renderings last week at IllustratedVancouver.ca.

I now have an audio excerpt from the tour posted here, where Richard goes into great depth describing the epic mural on the side of the Orwell Hotel (click for video from vancouvermurals.ca). On the tour, I also learned that Richard was taught by Orville Fisher, a significant Vancouver artist and muralist featured previously on Illustrated Vancouver.

We ended the bicycle tour at the new community mural River of Crows (the McLean Drive Mural Project) which was completed on July 19, 2011 (click for River of Crows video by W2TV). On the tour, we learned that the City of Vancouver is developing a new website to showcase the murals at vancouvermurals.ca (currently forwarding to the development site, muralsvancouver.ca). I believe this is a profoundly important initiative, as the study of mural art often is often not given the attention and respect it deserves.

A case in point: I recently read an essay about street art in San Francisco in the book Ten Years That Shook the City: San Francisco 1968-1978. Specifically, the essay covers the Mujeres Muralistas, a group of Chicana/Latina artists in the Mission District that pioneered large-scale, woman-painted outdoor murals. Many of their murals have been lost to history as a result of poor stewardship, redevelopment, vandalism, and the outdoor elements, all of which are constant threats to the temporal medium of the art form.

Murals may come and go, but photography can help to preserve their memory. Aided by an online image search, I recently came across one such lost mural of Vancouver I'd like to spotlight here. 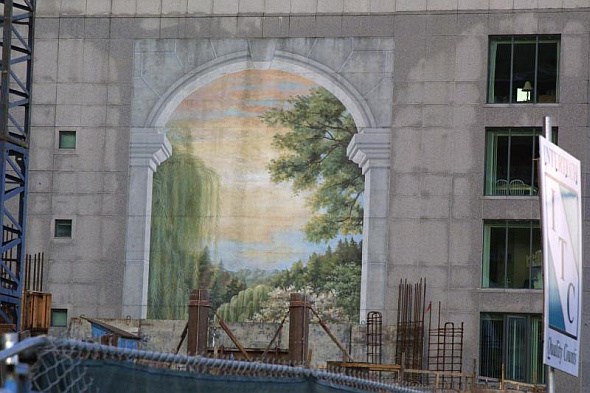 Photograph by Luis Curran, at the end of Chilco Street between Alberni and W. Georgia Streets.

This idyllic view of Stanley Park was painted on the side of the Chapel at Stanley Park, at the end of Chilco Street between Alberni and W. Georgia Streets. This text description accompanied Luis Curran's photograph, believed to be taken on November 6, 2005:

This mural was originally commissioned by the architect to answer the complaints of those who thought views of Stanley Park would be destroyed by his building on the corner. A new building has since been built right next to it so, inevitably, the mural is now lost!

I actually don't even recall seeing this mural in person, as 2005 was the first full year I spent in the city. Clearly, I should have been spending more time photographing in and around Stanley Park! 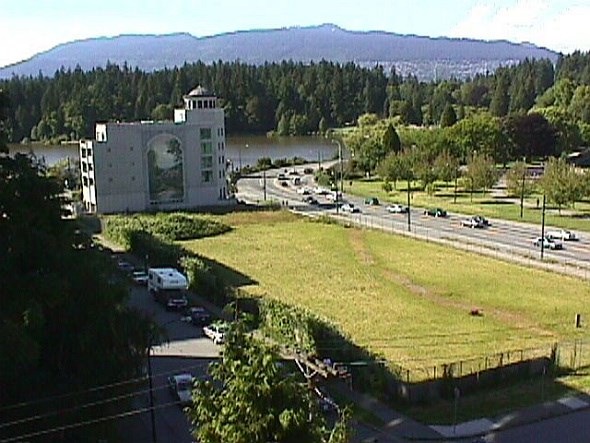 Photographer unknown, from the website of RE/MAX Crest Realty (Westside)

This second image shows a nearly empty city block, except for the chapel with its five storey mural perched on the edge of Stanley Park. I'm guessing the date of this photograph is circa 2001? Since I don't know who the artist of the mural was, or even who the architect of the chapel was for that matter, I welcome feedback in the comments. With your help, perhaps we can fill in some of the details of this lost city mural.

UPDATE! Thanks to a comment from our readers, the artist has been identified as Dana Irving, and the mural was titled Stanley Lodge. About the mural, Dana writes:

I did the painting in 1995. At the time, the architect - Ernest Collins was doing a lot of homes and buildings for prominent clients here in Vancouver. I quite often painted for these clients, Stanley Ho being one of them. The mural was something of an afterthought as the building was getting bad press for blocking the beloved view into Stanley Park and Lost Lagoon. Stanley Ho thought painting a picture with the essence of the missing view might help. It was known from the beginning that future development might impede the view of it. The mural lasted about 10 years...It was an exciting project at the time and the payment was equally exciting so it's all good. A friend of mine put it this way...it's now in a time capsule.

Big thanks go to Mike for the comment below, and Dana for filling in additional source details about the work! Much appreciated by all those who appreciate murals of the city!

UPDATE #2! I've just received a rare gallery of photos of the chapel and vicinity just before the reconstruction of the Stanley Park S curve, thanks to Vancouverite David Fletcher, who also happens to be featured on Illustrated Vancouver. He took these photos on February 23, 2003. See the photos after the jump... 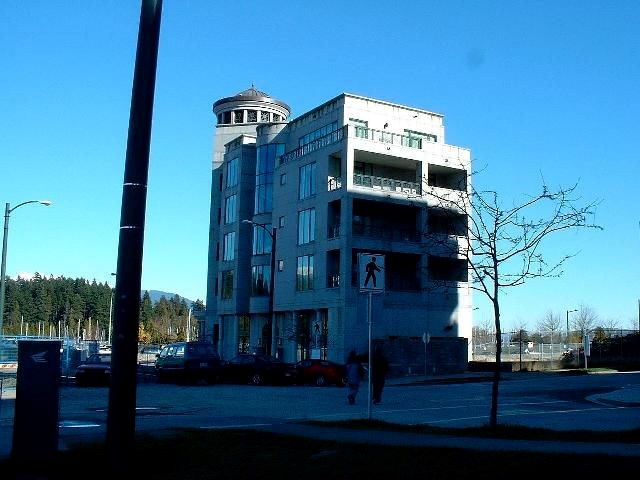 From Chilco Street side 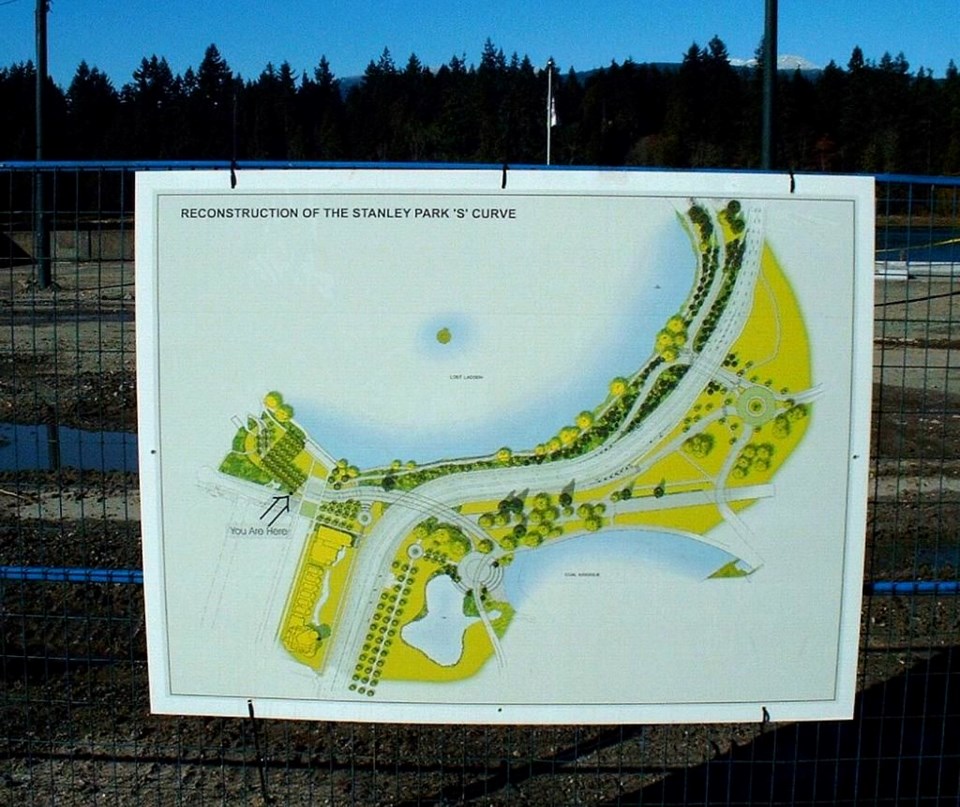 The posted plan of the Stanley Park "S" curve underway 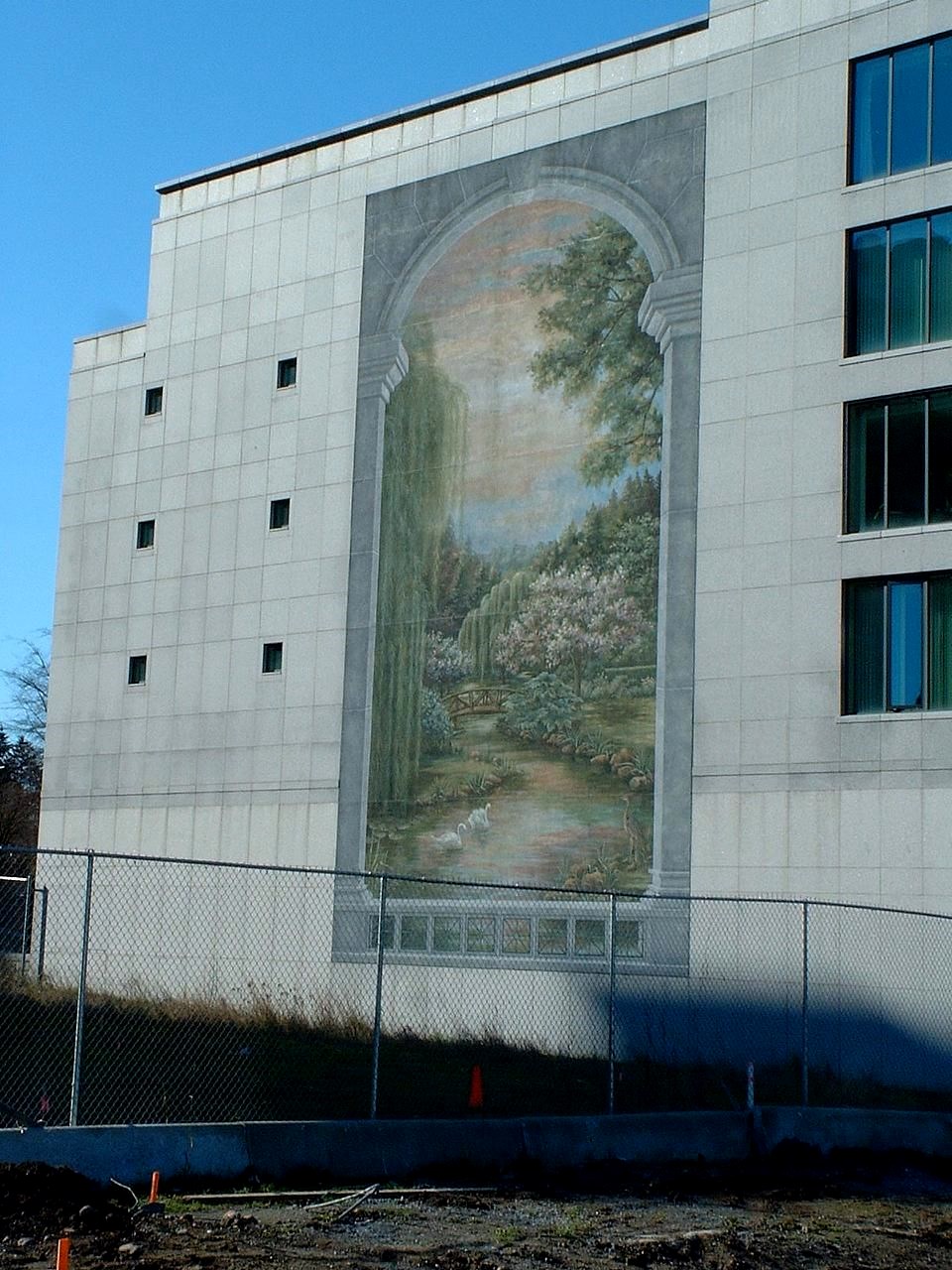 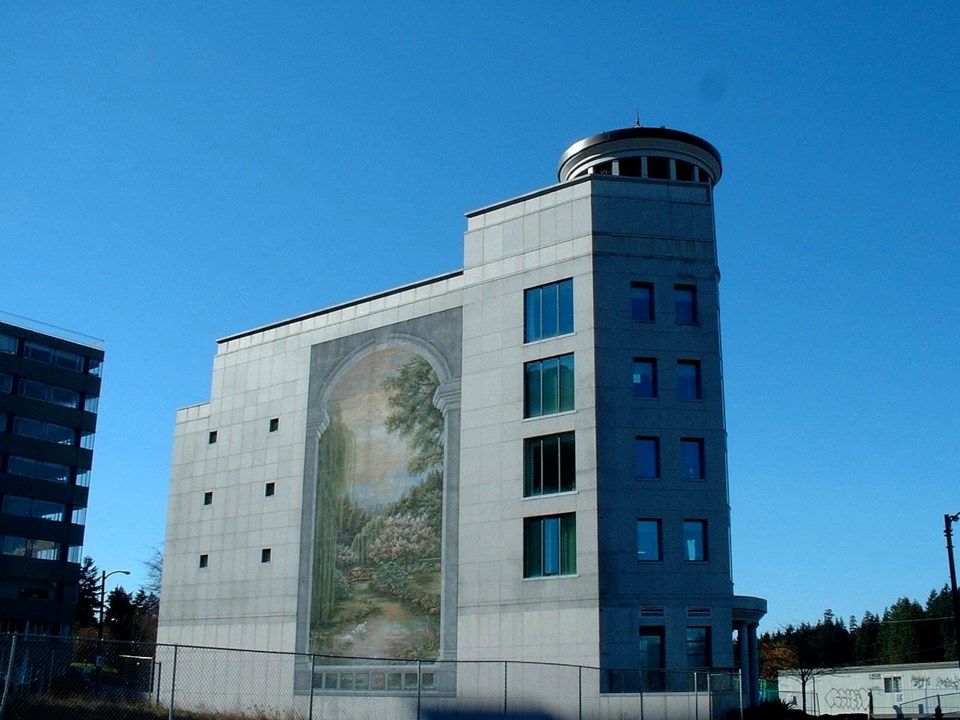 The mural on the Chapel building wall 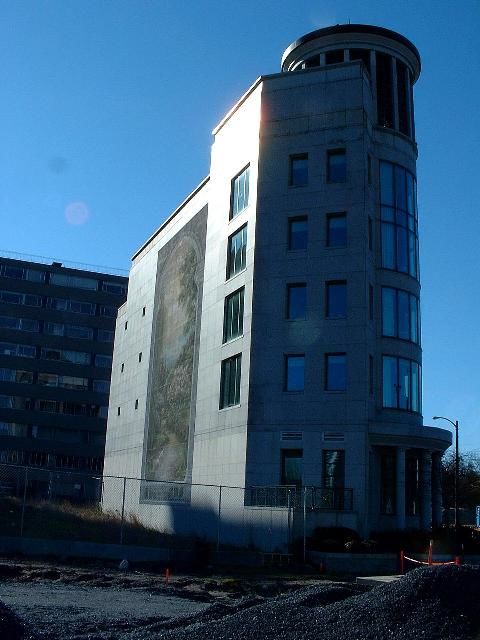 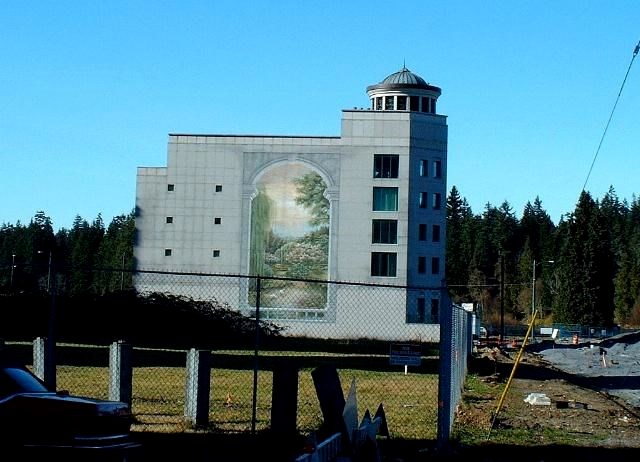 The Chapel at Stanley Park

Thanks for the photos, David!