Check out this incredible cabin on the edge of a rock promontory in B.C. (PHOTOS)

The cabin, with its 270-degree ocean view and wrap-around cedar deck, is impossible to miss from Chesterman Beach in Tofino.
0
Feb 8, 2020 12:46 PM By: Times Colonist
Previous Next
1 / 1 Many builders refused to build the cabin on this rock promontory, claiming it would be a logistical nightmare. Photograph By Deddeda White
Expand
Previous Next

If you’ve been to Tofino, you’ve likely seen this remarkable cabin on a rock promontory that juts into the sea, backed by old-growth forest.

The cabin, with its 270-degree ocean view and wrap-around cedar deck, is impossible to miss from Chesterman Beach. It’s located at the north end of Shell Beach, a small but beautiful white-shell beach between Chesterman and McKenzie beaches.

Perhaps you’ve wondered just how the cabin came to be there, especially when storm season is in full force, with gigantic Pacific swells rolling in.

Luckily, the cabin has been strategically placed high enough to ensure the building is safely out of the water, with the sea flowing in behind it. In fact, the promontory becomes an island for an hour or two during the highest of the tides, writes the cabin’s original owner, Howard McDiarmid, in his book Pacific Rim Park: a country doctor’s role in preserving Long Beach and establishing the new Wickaninnish Inn.

It’s something he noticed while flying over the area immediately after a November storm, when the swells were still high.

McDiarmid explains in his book why he was so determined to build on this difficult-to-reach spot. He and his wife, Lynn, would frequently enjoy picnics on Shell Beach, and he “would point to the rocks just in front of the tree line and say: ‘This is where the cabin will go,’ ” though they didn’t yet own the land.

They were finally able to buy the property in 1977 and the cabin was built the following year. It was always meant as a second home and never served as the family’s primary residence.

McDiarmid, who was Tofino’s only doctor when he first arrived at what was then a remote fishing village in 1955, would go on to become a Social Credit MLA from 1966 to 1972 and play a key role in the establishment of the Pacific Rim National Park Reserve in 1970.

McDiarmid also built the highly acclaimed Wickaninnish Inn in 1996, along with his son, Charles, who is still at the helm of the family’s long-time dream. Howard died in 2010 at the age of 83. 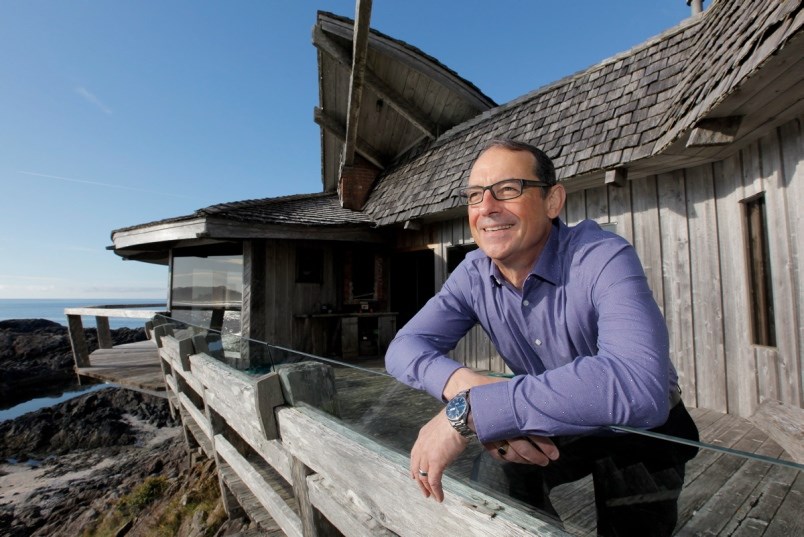 Charles McDiarmid stands on the deck of the cabin, which looks over Shell Beach and toward the Wickaninnish Inn, which he founded with his father Howard in 1996.Photograph By Deddeda White

In an interview recently, at the Wickaninnish Inn’s The Pointe Restaurant, Charles McDiarmid pointed out how the restaurant’s sweeping 240-degree view of the ocean and post-and-beam style were inspired by the cabin.

The cabin is visible from the inn’s windows and guests of special functions such as beach weddings can walk to Shell Beach. But the cabin is maintained for family members and friends only.

Charles said a nephew is planning to host friends for New Year’s there this year. They’ll be able to reach the house by vehicle, which wasn’t always the case.

Charles recalled having to walk to the end of Chesterman’s Beach and hiking through the forest to reach the cabin in the early days. That long-gone forest trail would have started at what is now the steps that lead to the Wickaninnish Inn from Chesterman Beach, and continued through what is now the inn’s parking lot.

“I would hike in with my Trapper Nelson backpack carrying all our supplies in and our trash out,” he said. “We’d all gather there for the holidays, my two younger brothers and myself — Christmas, New Year’s, Thanksgiving. I have fond memories. I’d always be the last to arrive, since I was working all over North America and they were all living in Victoria.

Little has changed of the cabin’s interior. The original brick fireplace is still the main feature of the circular living room, provided you aren’t including the majestic view from the many large windows that take in Chesterman Beach, Pacific Rim National Park Reserve, Frank Island, Templar Channel, Lennard Island, Tonquin Island, Wickaninnish Island and, of course, the open ocean.

Charles explained the first cabin burned to the ground in August 1987 after a rag soaked with linseed oil ignited on a hot day, and the fire spread quickly to nearby propane tanks stored in a little shed on the property.

His father and one of his brothers, who were staying there at the time, were able to escape to Shell Beach, where they watched the cabin’s destruction. By 3:05 a.m., the brick fireplace was the only thing standing.

In 1990, the family rebuilt the cabin, with only one change — they made the living room even larger to take full advantage of those sweeping Pacific Ocean views.

Thankfully, the family’s long-time carpenter, Henry Nolla, was on hand to redo much of his beautiful woodwork, such as the carved-wave detail that runs across the fireplace mantle and the carved front door featuring grey whales.

Nolla, who was an expert at adzing wood, also spent about three weeks chipping the large wood beams and some of the cabin’s wall panels “one chip at a time,” said Charles.

One of Nolla’s hand-made adzes is on display at the Wickaninnish Inn and is sometimes still borrowed by carpenters doing work at the inn. His carving shed on Chesterman Beach is also still used by many of his protégés.

Nolla, who died in 2004, was the main reason the cabin was even able to be built initially.

Charles said his dad approached at least three builders who refused the job, saying its location made it a logistical nightmare.

Only one builder, Don McGinnis of Don McGinnis Contracting Ltd., was willing to take on the project because he knew Nolla, his chief carpenter at the time, was also a skilled skipper and could navigate over the reefs at high tide to get supplies to the building site. They used a flat-bottom herring skiff to bring in the supplies.

The crew also built a tramline, using a generator and winch, to lift supplies dropped off at Shell Beach to the top of the rock promontory.

The original cabin didn’t have water or electricity, so a hot-water tank was built on the hillside behind the cabin and propane was used to heat the water, fuel the stove and fridge, and light the propane lights, some still in place over the kitchen sink today. Propane was used for at least a decade before electricity and water were finally installed.

The house also has a wood stove in the kitchen, and the same modest kitchen cupboards and furniture used after the cabin was rebuilt.

The cabin has three modest-size bedrooms, and the one below can only be accessed from outside.

Unlike the Wickaninnish Inn, which has updated and stylish bathrooms and bedrooms, the cabin is definitely rustic.

But that’s also its charm. Its simplicity encourages you to look outward to the natural environment, the reason why Howard McDiarmid was originally attracted to this parcel of land on the edge of the continent.

“My father had the foresight to acquire the land in the 1970s and he believed one day, people would make their way to Tofino and it would be a destination. It’s now known around the world, which is incredible for a small town of 2,000 people,” said Charles.

Check out this $16M West Vancouver mansion’s mini-golf setup (PHOTOS + VIDEO)
Feb 22, 2020 6:32 PM
Comments
We welcome your feedback and encourage you to share your thoughts on this story. We ask that you be respectful of others and their points of view, refrain from personal attacks and stay on topic. To learn about our commenting policies and how we moderate, please read our Community Guidelines.