#InTheVillage on False Creek Part 61: Why does Habitat Island even exist?

Welcome to In The Village on False Creek , a unique project inspired by Live@YVR and 365 Days of Dining .

During the past ten and a half months I've spent a lot of time on or near Habitat Island, just north of the SEGREGATED OFF-LEASH DOG PARK that I wrote about last week. I haven't come to take it for granted but in conversation with a neighbour I was recently reminded that newcomers to Vancouver are often not aware that prior to 2007 this little sanctuary in the creek didn't even exist. If this photo was shot in 2006 and not just yesterday that big chunk of rock and gravel topped with trees and native BC plants wouldn't be there; this would simply be a photo of the water and the North side of False Creek. They built this incredible thing when they built our little Village. But why?

I've BLOGGED about Habitat Island briefly in the past but I've been purposely holding off on making an in-depth post about it partly because its story is best told in person (on a WALKING TOUR with Margot Long who helped design it with her landscape architecture firm, PWL Partnership) but as my year-long project blogging about the Village is coming close to an end I'm feeling some urgency to share more nuggets of the awesomeness that I've accumulated. 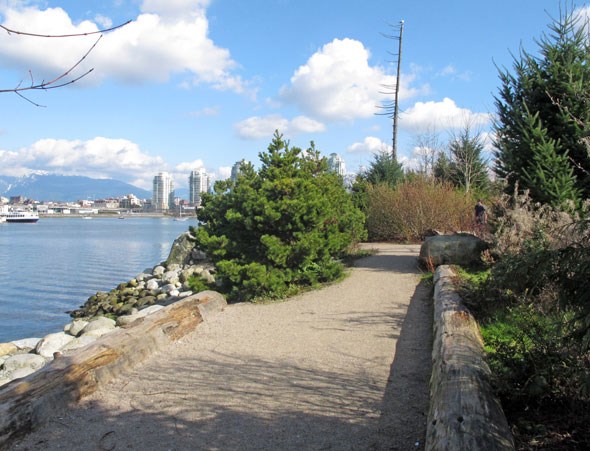 The answer to the question "Why does Habitat Island even exist?" is fairly complex. Sure it was a nice gesture that they made us an island to hang out on. It looks nice. It's a perk to be able to pick the berries that grow on it and eat them in the summer. It's nice that as opposed to the other side of False Creek we're encouraged to approach the water (see below for a photo looking South off of Habitat Island, then another looking across the water at the untouchable Yaletown waterfront). All of these things make the experience of living in (or visiting) Southeast False Creek great, but it took a lot more than the will to make something nice for the neighbourhood. It took public policy. 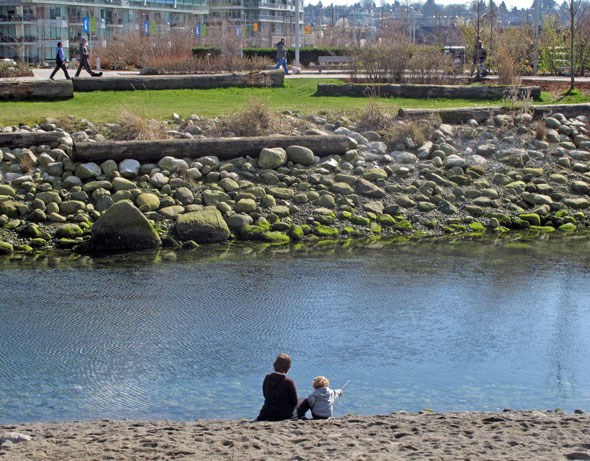 The view of the Village, shot looking South from Habitat Island 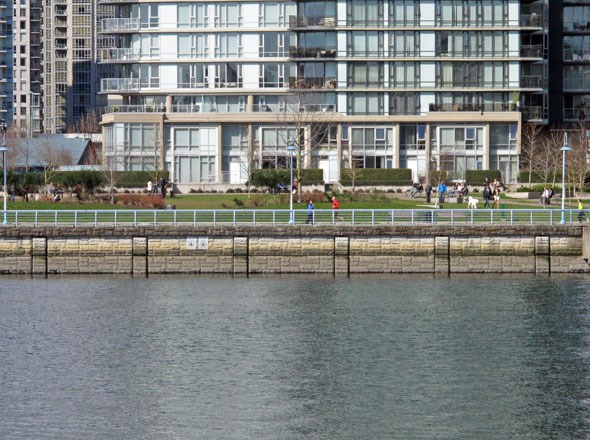 The view of the North side of False Creek, shot from Habitat Island

The main reason that Habitat Island was built actually has to do with the federal Department of Fisheries and Oceans. Prior to 2007 the shoreline in False Creek went all the way back to the far edge of the Salt Building, pictured below. As a matter of fact if you go up to it now and look underneath you'll see the salty pilings that used to keep it from falling down into the water. In order to make new land to put the public plaza and some of the development onto they actually had to bring in tons and tons of gravel to fill in a portion of the creek. And even though it was polluted industrial shoreline at the time, there's a federal regulation under the DFO that says when you do that, when you get rid of shoreline for development, you have to make up for it elsewhere by building more shoreline. The answer here was to build an island. 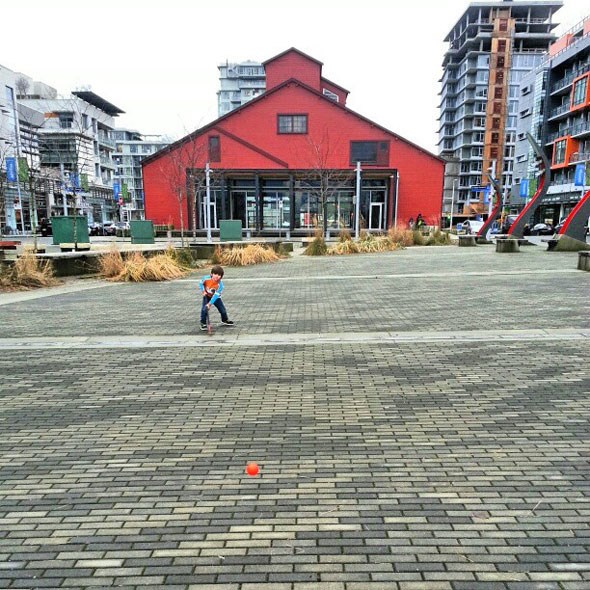 Playing hockey where there once was shoreline

Habitat Island now serves as a place we all enjoy. It's a public park. A piece of the puzzle that makes our neighbourhood the greenest in North America, interconnected with the WETLANDS which take in water from the storm drains in the area and rehabilitate it before it enters False Creek. This shoreline restoration has resulted in herring returning to spawn in False Creek (HERE is a video of a heron feasting on some) and it is one of my absolute favourite things in our neighbourhood. 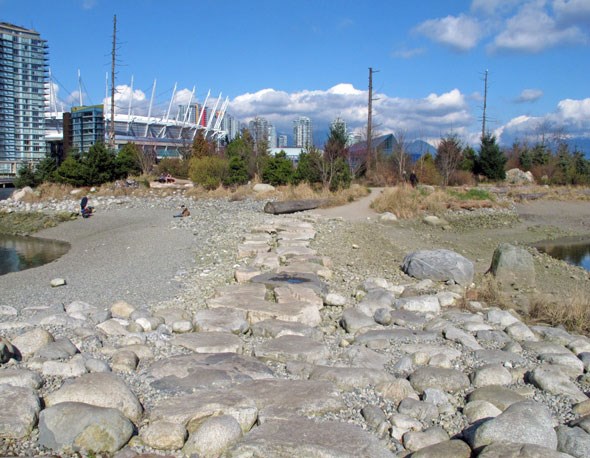 Oh! And the city just installed some new bike racks in front of it, so there's really nothing stopping you from coming down for a visit. 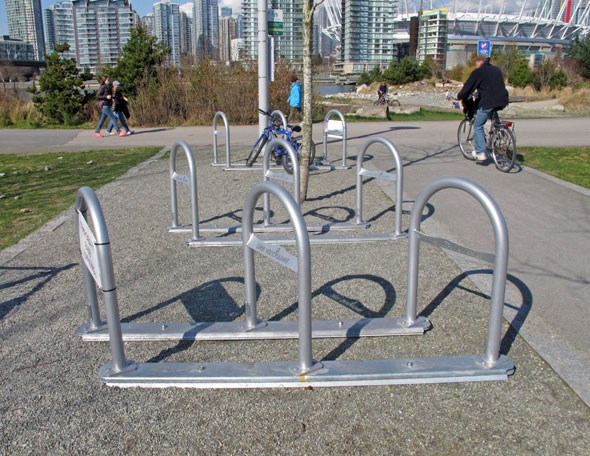 BONUS PHOTOS: Habitat Island while under construction in 2007 (I will hopefully have more of these to share soon) 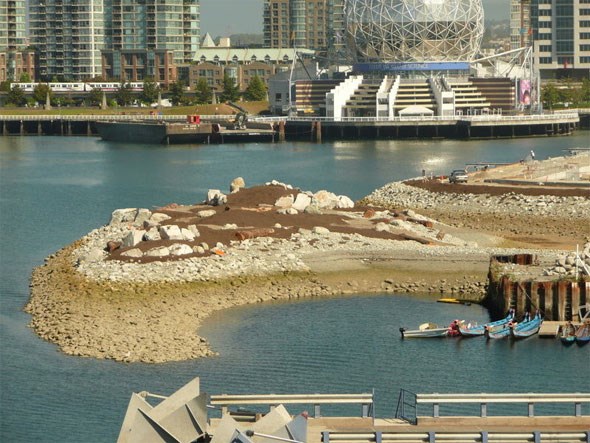 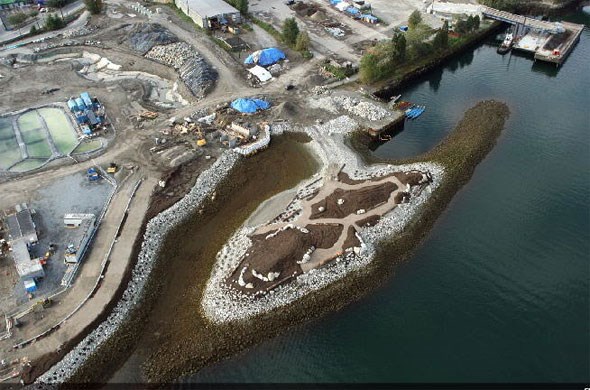 BONUS FACT AND PHOTO: Habitat Island was originally meant to be completely inaccessible during high tide. The idea was to have it be an actual island as opposed to a peninsula which it technically is now. There was much debate at the city over public safety concerns, and people getting stuck on the island at high tide, so they ended up lifting up this walkway pictured below. This photo was taken before they raised it (I imagine 2008), and is what the original vision was. 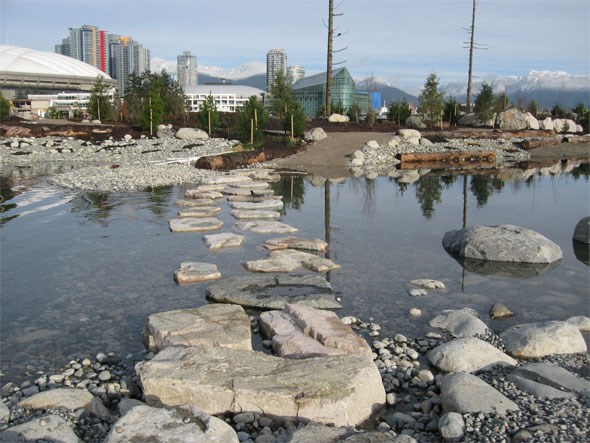 Learn more about The Village at TheVillageOnFalseCreek.com and stay tuned each week as I expose the unique qualities of our new community.