The latest rezoning application to be considered under the City of Vancouver’s moderate income rental housing pilot program proposes a 13-storey mixed-use building on Kingsway at Glen Drive.
0
Jul 27, 2019 4:53 PM By: Naoibh O’Connor

The latest rezoning application to be considered under the City of Vancouver’s moderate income rental housing pilot program proposes a 13-storey mixed-use building on Kingsway at Glen Drive. The project will include some townhomes.

The development would feature 128 secured rental units, 23 of which would be geared toward moderate income households earning between $30,000 and $80,000. 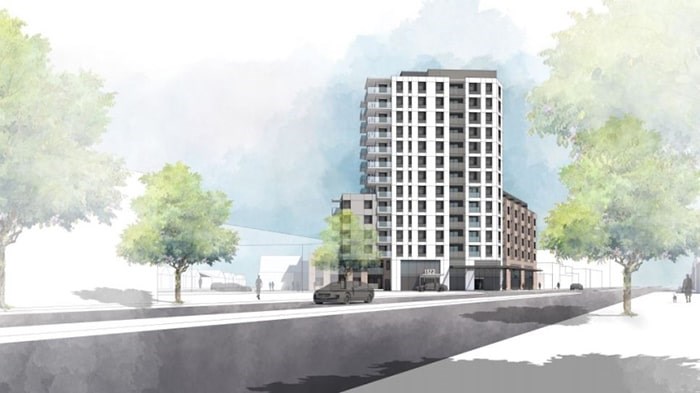 The development site, which is currently occupied by two one-storey automotive repair buildings, is at 1111 to 1123 Kingsway.

Kingsway Auto Glass is on the lot at 1123 Kingsway. Stan’s Transmission Centre and Auto Repairs R Wee split the other lot at 1111 Kingsway, but both of those longtime Kingsway businesses have since relocated.

Peterson is the developer behind the Kingsway rezoning application, while Musson Cattell Mackey Partnership is the architect.

“The rezoning application responds to City of Vancouver objectives and policies regarding affordable and family housing, transit-oriented communities, and sustainability,” application states.

Vancouver’s Moderate Income Rental Housing Pilot Program (MIRHPP) is one of the city’s Housing Vancouver strategies that aims to create the “right supply” of housing, which is affordable to local workers.

It’s limited to 20 rezoning applications for new buildings that provide 100 per cent of the residential floor area as secured market rental housing, with a minimum of 20 per cent secured for households in the $30,000 to $80,000 earning bracket.

Recent applications under the program, including one for Broadway at Birch and two others for buildings on Hastings at Kootenay and at Boundary, have attracted mixed reviews. Supporters cite the need for more purpose-built rental buildings and see the proposals as necessary to address the housing crisis, while critics have complained about issues ranging from heights and location to parking and traffic.

An open house about the Kingsway project runs from 4:30 to 7:30 p.m. at the Polish Community Centre Sept. 4.