Plans for the former Oakridge Transit Centre site are ramping up — the rezoning application for the project, which is described as “one of the last large-scale, centrally-located developments of its kind in the city,” goes to open house this November.
0
Oct 16, 2019 7:31 AM By: Naoibh O’Connor 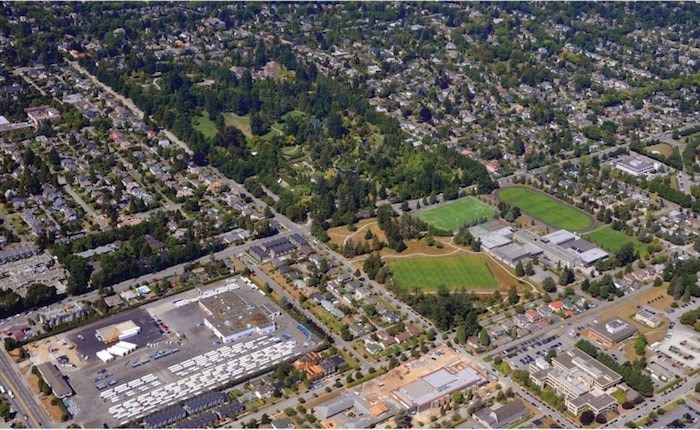 The site of the former Oakridge Transit Centre: below, left corner.

Plans for the former Oakridge Transit Centre site are ramping up — the rezoning application for the project, which is described as “one of the last large-scale, centrally-located developments of its kind in the city,” goes to open house this November.

Dubbed “Oak Green,” the development envisions including 17 buildings, which rise between three and 23 storeys, a childcare facility, a public park, retail space and social housing.

More than 1,600 homes are planned — 1,149 market residential units and 180 secured market rental units, including 45 moderate income ones, as well as 300 social housing units in two buildings.

The childcare facility would cover 8,500 square feet, while a 2.34-acre public park is proposed, along with a total gross floor space ratio (FSR) of 2.30.

The OTC site is zoned for single-family use but was used as a transit centre between 1948 and 2006, at which point a new transit centre was completed on the Eburne lands.

(Before the transit centre opened, it was used as an army barracks.) 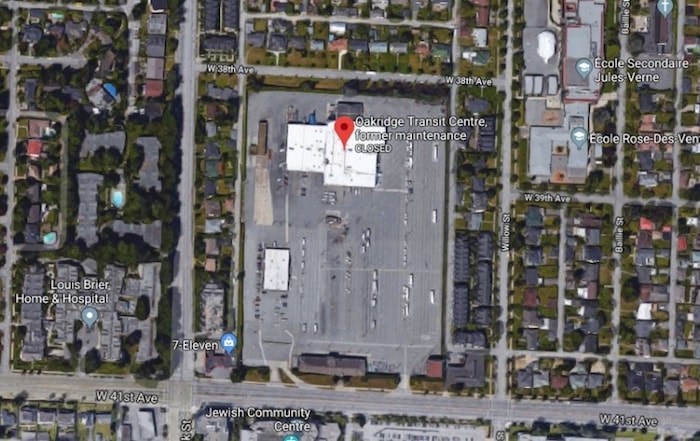 Google Satellite View of the site.

After 2006, for a few years, the property served as an operations and maintenance facility for TransLink, primarily for vehicle maintenance, commissioning and decommissioning, as well as for storage of retired buses.

At the request of TransLink, planning for future use of the property began in 2014.

That culminated in city council approving a policy statement in 2015, which addresses subjects such as parks, public spaces, transportation, land use, density, built form, massing, sustainability and community amenities.

The policy statement envisioned building heights of three to 12 storeys, with some sites identified for 15 storeys, and a density of 2.1 FSR.

TransLink sold the site to Intergulf-Modern Green Development Corp. for $440 million in 2016, according to a CBC report.

The rezoning application for the site seeks taller buildings and a higher density than what was approved in the policy statement. It points to the recent approval of 24 and 26-storey towers on the Jewish Community Centre site, immediately south of the OTC property, as a signal that the city would support increased heights and density along 41st, and that the development team also heard public support at an April 2019 open house for higher densities to accommodate an increase in affordable rental and social housing on the site.

The City of Vancouver says its assessment of the rezoning application will take into account community input, the existing policy statement, design guidelines, existing zoning, surrounding neighbourhood context and development objectives on the site.

“City Council approved a report in July 2019 that directed staff to consider additional height and density on large sites, such as the OTC, along with the provision of additional moderate income rental housing,” Kirsten Robinson, a senior community planner, wrote in an email to the Courier. “This is a direction which supports recent City policies, including the Housing Vancouver Strategy and the updated Rezoning Policy for Sustainable Large Developments. These policies both include direction for greater provision of affordable and rental housing in Vancouver, direction that has been strengthened since the adoption of the OTC Policy Statement.”

Council will vote on the project after a public hearing where residents can share their opinions about the proposal.

If council approves the application, the plan is to complete the development in five phases. Current timelines envision beginning with the southwest corner of the site in late 2020. Project completion is slated for the end of 2031. 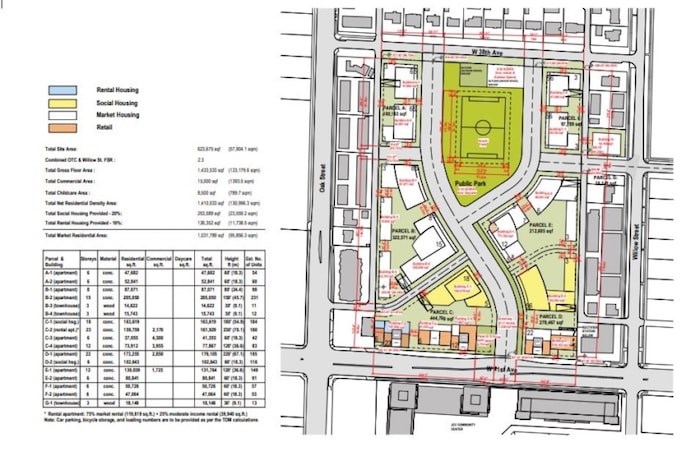 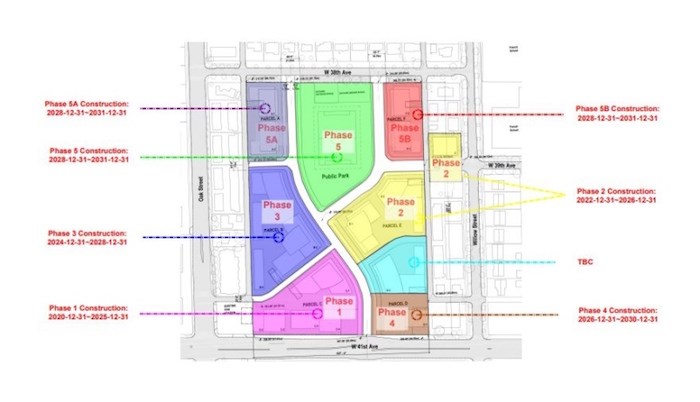 Phases of the development project.