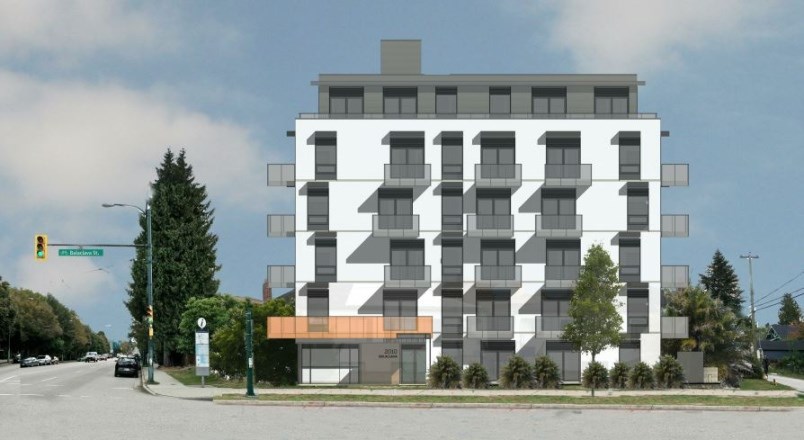 The six-storey rental building is proposed for the corner of Balaclava and West Fourth Avenue. Rendering Ekistics Architecture

Today, duplexes sit on a large corner site at 3084 West Fourth Ave. and 2010 Balaclava St. That may not be the case a few years from now. The City of Vancouver is entertaining a rezoning application under its Moderate Income Rental Housing Pilot Program to construct a six-storey, 35-unit rental building.

The property at 2010 Balaclava St. currently features a one-storey duplex built in 1943.

If the rezoning application is approved, 20 per cent of the residential floor space in the new rental building would be set aside for units catering to moderate income households earning between $30,000 and $80,000. For this proposal, that translates to eight of the 35 apartments, including two studios, three one-bedrooms and three two-bedrooms.

One of the most disputed rezoning applications was for another Kitsilano project proposed for Larch and West Second, which city council ultimately approved.

An open house about the proposal runs from 5 to 8 p.m. at H.R. MacMillan Space Centre March 11.