The future of Furry Creek unveiled

Furry Creek development proposal. Hundreds of townhouses framing a revamped golf course and clubhouse, with apartment units, a general store, a boutique hotel and possibly even a marina thrown in.
Glacier Media Oct 26, 2017 9:30 AM 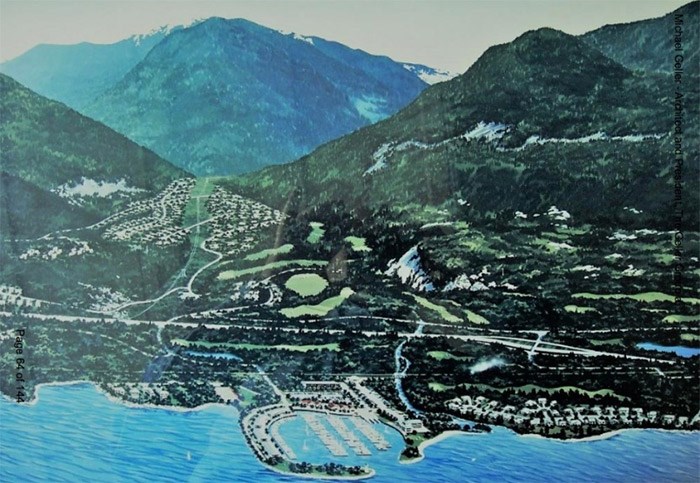 Hundreds of townhouses framing a revamped golf course and clubhouse, with apartment units, a general store, a boutique hotel and possibly even a marina thrown in.

The latest vision for the Furry Creek Golf and Country Club was revealed to the Squamish-Lillooet Regional District on Thursday.

This presentation was prompted by the high-profile purchase of the golf course by Fine Peace Holdings, a Chinese company that has built similar residential-resort golf courses in Australia and China.

"What I will tell you is this is not just a company that's come here to park some money with very little experience in [developing]," said Michael Geller, the Vancouver development consultant who helped broker Fine Peace's purchase of the course and its surrounding land.

"On the contrary, this is one of the major companies in China when it comes to the development of leisure-oriented or resort-oriented communities."

The presentation served as a general introduction to the development and described the proposed project in broad strokes.

"I think what we want to do is start a conversation with you today to hear what you think should be happening at Furry Creek," said Geller.

Geller said Fine Peace would likely propose about 250 housing units around the waterfront in the future. Adding townhouses is allowed under current zoning, but Fine Peace may consider adding in single-level apartments, which could call for zoning changes, he said.

The proposed marina would likely be on a smaller scale, for use of local residents only, he said.

Geller added that there's also mixed-use zone in the area that would allow for commercial on ground level and residential on the second level.

In addition to a general store, there could perhaps be spaces for doctors and businesses to set up shop, he said.

Geller's plan in many ways appears to be a continuation of the original intentions of one of the site's previous owners.

When Tanac Canada, a subsidiary of the Tanabe Corporation of Japan, owned the area in the early 1990s, it had proposed 920 residential units, in addition to a golf course, a marina and resort facilities.

The golf course and some housing units were built, but Tanac never reached the goals it had outlined.

Eventually, that company decided to sell the 1,000-acre property, with the Burrard Group taking the golf course and the surrounding area and Parklane Homes taking the uplands farther from the water.

Fine Peace bought the 175 acres – including the golf course – that were held by the Burrard Group, but not the land owned by Parklane.

Geller's presentation was greeted by a generally positive response from the regional district's board.

"Everybody I've spoken to — I can't think of a negative comment," said Tony Rainbow, the director for Area D, where the Furry Creek golf course resides. "I'm very encouraged by the approach Mr. Geller and his team are taking."

However, there were some concerns that the directors highlighted.

Squamish Mayor Patricia Heintzman, who also serves on the regional district board, questioned if housing was being built on an alluvial fan, which could present challenges with flooding.

Heintzman also added that there should be considerations for affordable housing.

"The areas that are being proposed for development have already been signed off by the provincial gov't as being suitable [for building housing]," Geller replied.

Geller added that Fine Peace is also taking rising water levels into account, and for that reason is considering apartments.

Because apartments allow for structural parking on the bottom and housing above, this could help mitigate flooding problems, he said.

He also appeared to express openness to talking about affordable housing.

Director Mike Richman said it would be important for the development to avoid creating a "commuter-only" community, as traffic and transit along the Sea to Sky Highway has been an ongoing issue.

Geller said that adding commercial units for things like a general store would prevent people piling onto the highway for necessities.

Furthermore, he said, Fine Peace is considering proposing live-work units, which could help keep people in the area.

Geller also added he wanted to make the design of development a collaborative process that would be open to public input.