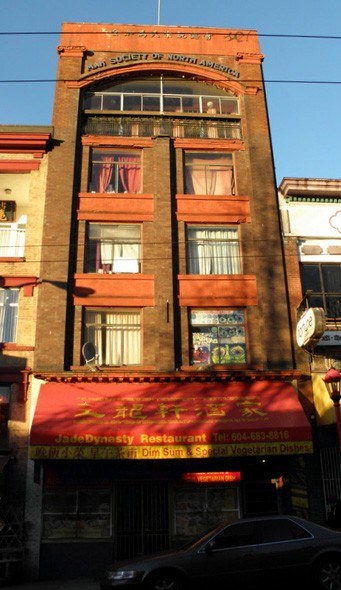 If you've never been, join us for VHF's ever-popular Chinatown + Dim Sum walking tour, Sunday October 25th (almost full) but repeated Sunday, November 22nd. From 9am-11am you'll learn from John Atkin, Civic Historian and Co-Chair of the Chinese Canadian Historical Society of BC, about one of the city’s oldest districts. We’ll explore fascinating history and unique architecture, dispel some myths, explore a few nooks and crannies and look at the future of this important neighbourhood, including efforts to maintain and rehabilitate the historically significant Chinatown Society Buildings. From 11am onward, the conversation will continue over Dim Sum lunch at a local restaurant. Register here. $35 + tax (includes dim sum).

"Years before Vancouver’s incorporation in 1886, Chinese labourers worked in the industries that built the province -- in gold fields, coalmines, sawmills and canneries. Many emigrated from southern China, to work under contract in Canada. Between 1881 and 1885, for example, 10,000 Chinese were contracted to build the Canadian Pacific Railway. In those early years Chinatown was predominantly male. In Chinatown, they usually lived in rooming houses in the Pender St. area. The government of BC was not particularly interested in the social or physical welfare of the Chinese community so the community created its own aid associations and societies based on common surnames, place of birth in China or organizations for the general community good. Designed for mutual help, co-operation and general welfare, these associations flourished in Chinatown. By 1937, there were over 60 such organizations. Many of the imposing headquarters on Pender Street dating from the early part of the 20th century are still owned by the societies that continue to serve their membership." (An excerpt from VHF's Map Guide of Vancouver's Chinatown Historic Society Buildings)

Why are Chinatown Society Buildings integral to the cultural and social identity of Vancouver's Chinatown and its future? Edmund Ma, part of the Youth Collaborative for Chinatown and one of the youngest members of the Mah Society shares with us his thoughts:

"Preserving the heritage buildings is the key historical piece that some family associations or societies have. It's a reference to discuss all the rich history of the family, Chinatown, and the City of Vancouver. For some societies it represents a link to culture and traditions that many of us want to preserve, as important as the society building's history in Hong Kong or China. It represents Chinese culture in one of the main port cities of North America, like it does in San Francisco. For the Mah Society, our building is the North American Headquarters and one of the oldest, so it represents the greater Mah Society chapters across North America, not just in Vancouver. As the Director of Mah Athletic Association and Sifu (a Chinese Master Teacher in Martial Arts), I take on the role of historian and educator to teach my students about the family history as far back as 1900. The building holds memories and creates new ones." (Edmund Ma)