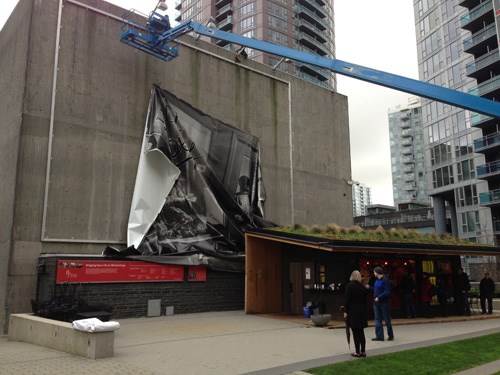 Join us November 12th, 12pm at CBC Studio 700 for the official launch of the 2015 Wall artwork! Interdisciplinary artist Faith Moosang will be leading an artist talk about her process and interpretation of the WALL theme, Vancouver’s built heritage in her new work, down. town. The talk is free and open to the public. The first 50 people to arrive will receive a voucher for a complimentary drip coffee from JJ Bean Coffee Roasters.

"down. town. is a large-scale composite photograph created from 164 individual film frames, video stills and digital photographs gleaned from the CBC Archives and Wikimedia Commons. There were three questions behind the work - how many buildings have been demolished in downtown Vancouver between 1954 and 2015, how many of these demolitions were considered newsworthy and how does one represent the notion of absence or missing? The boundaries of the downtown core were taken from the municipality’s parameters - the west side of Main Street to the east side of Burrard, False Creek to Burrard Inlet and the jut of Coal Harbour, beginning on the north side of Georgia and ending at the water. The temporal boundary of the project (1954 onwards) relates to the fact that on December 16, 1953, CBUT (the CBC precursor) became the very first television station broadcasting in Western Canada, marking the moment when Vancouver had local televisual news for the first time in its history.

Research, both online and at the City of Vancouver Archives, revealed that the number of buildings that have come down in this period approximated 1500 – with high-density areas of destruction taking place in the industrial areas of Coal Harbour and False Creek. The CBC Archive, the sole archival resource for the images of buildings in this project, contained footage of 47 of these buildings in the process of being demolished or burnt. Looked at another way, approximately 3% of the destruction was recorded and delivered up to the public as news.

The high number of buildings that have gone missing from our collective landscape is indicative that humans are notorious for forgetting, and that what is normal is always shifting. Vancouver has a (short) long history of development in the pursuit of density and profit."

The WALL, located at the CBC Vancouver Broadcast Centre Plaza at 700 Hamilton Street, is a Vancouver Heritage Foundation public art initiative located on the exterior wall above the JJ Bean Kiosk at the CBC Studios. Made possible by a unique partnership between Vancouver Heritage Foundation and CBC Radio-Canada, with support from JJ Bean Coffee Roasters, and the City of Vancouver Public Art Program, the WALL features a new artist every year. The artist is selected by the WALL committee to present a 30' by 40' installation based on the theme of Vancouver's built heritage, with the option of resources found in the CBC Archives.