COVID-19 has kept the targeted tenants for some recently-completed luxury rental builds at bay
Jun 8, 2020 12:54 PM By: Frank O'Brien 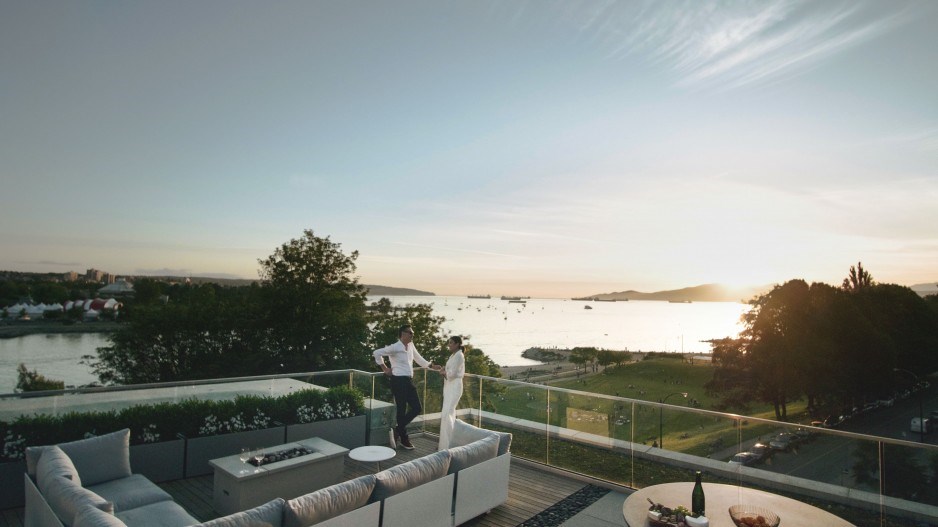 Perhaps the three most luxurious rental homes in Vancouver were completed this month but remain in limbo due, the developer says, to a unique lease arrangement and a pandemic that has kept the targeted tenants at bay.

The Eventide, a four-storey apartment building with just three units, including a stunning near-3,000-square-foot penthouse overlooking English Bay, are covered by a non-renewable 30-year lease.

This shelters the property from B.C.’s 20 per cent foreign-home buyer tax and the provincial property-transfer tax, but also makes it difficult to move.

“This is ultra-high-end, ultra luxury,” said developer Stanley Dee. “I promised the family that we would have a mechanism to eventually get it back.”

Dee, founder of Deecorp, said his family-run company would like to sell the entire property at 1460 Bute Street at the corner of Beach Avenue under a 30-year leasehold, with Decor maintaining ownership.

“But very few people are interested in that,” he said.

Dee had one potential buyer get as close as talking to lawyers, but that agreement eventually fell apart.

Now, ideally, he would like some group, perhaps a film studio, a major tech company, a professional sports organization, or perhaps, he said, a “New York billionaire,” to lease Eventide on a 30-year commercial lease.

“We also had some film people looking, and they were interested, but now, with the COVID situation, they are not allowed back into Canada,” Dee said.

Deecorp has had inquiries from potential tenants about renting the two smaller apartments on a short-term basis, but that isn’t appealing, Dee explained, because all of the apartments are complete with very expensive furnishings.

“We would need very large damage deposits,” he said. Also, having tenants in place could skew a deal for the entire property.

Dee was reluctant to discuss prices, but he said Eventide’s value would likely surpass the $2,000-per-square-foot price of Vancouver’s top condominiums.

BC Assessment values the penthouse alone at more than $6.6 million.

The Eventide suites are not vacant, which means the owners aren’t subject to the City of Vancouver’s empty home tax of 1 per cent of the property’s value.

“We have caretakers, people we know and trust, living there at very nominal rents,” he explained.

Dee said the ideal end game is a single long-term lease holder taking the entire building but, “with the right client and the right terms, we could be adaptive.”

(Some) B.C. tenants can now be evicted
Jul 9, 2020 1:40 PM
Comments
We welcome your feedback and encourage you to share your thoughts. We ask that you be respectful of others and their points of view, refrain from personal attacks and stay on topic. To learn about our commenting policies and how we moderate, please read our Community Guidelines.