The project, in Vancouver’s West End, will be among the city’s highest buildings if it’s approved and it also promises to be the tallest Passive House tower in the world.
Naoibh O’Connor Aug 20, 2019 7:22 AM 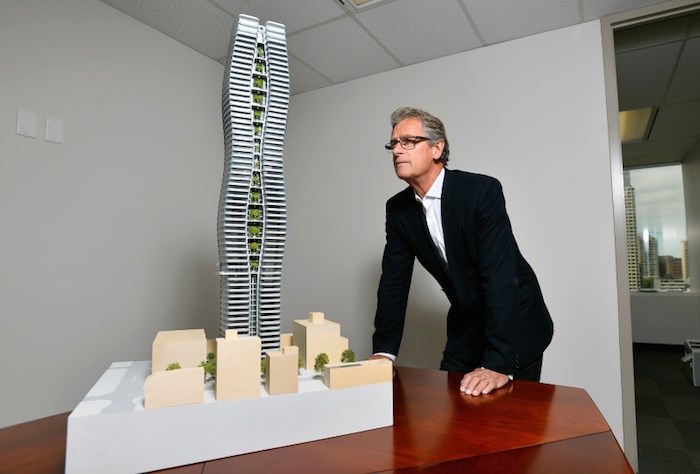 Rick Gregory, vice-president of Henson Developments, shifts the conversation away from height when asked about the company’s plans for a 60-storey tower on Nelson Street.

“You can make any buildings you want but the planet is on fire...” he told the Courier at the spring open house for the project before calling attention to what he sees as a key feature of the proposal — the plan to earn Passive House certification.

Passive House is an international standard for energy efficiency focused on creating an airtight structure, having high-quality windows, super-insulation and good ventilation.

Elaborating on his remarks during a subsequent interview, Gregory said climate change is a concern.

“I don’t want this to sound preachy but you asked me the reason [for building to Passive House standards] and that’s really what’s in my mind, and is driving it from my perspective and the company’s.”

The project, envisioned for a site at 1059 to 1075 Nelson St. near Thurlow Street in Vancouver’s West End, will be among the city’s highest buildings if it’s approved and it also promises to be the tallest Passive House tower in the world.

It went before the Urban Design Panel June 12. City staff are now reviewing the rezoning application and are in discussions with the applicant. A staff report will eventually go before city council for referral to public hearing.

Sean Pander, green building manager for the City of Vancouver, told the Courier it would be a “very big deal” if it’s approved, not because the tower would break a height record for Passive House projects, but because a building of this scale will drive innovation in "low-carbon, healthy, comfortable buildings" and help push down costs for future developments that want to go to a high-performance outcome. 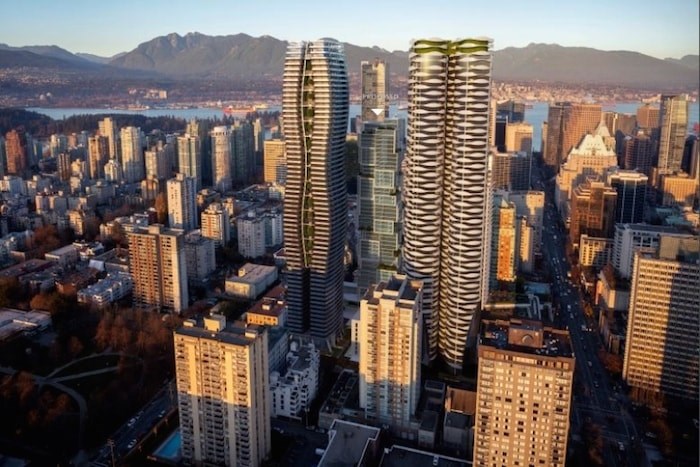 An image of the building Henson Developments is proposing for 1059 to 1075 Nelson St. near Thurlow Street.

“It's not a look-at-me thing that makes it a big deal. What makes it a really big deal is the amount of attention it will get with the public, as well as with developers, designers, manufacturers of windows. Given the scale of it, it will have a lot of conversation and, from what I’ve observed to date, the design team is really wanting to make it a successful project,” he said.

Building for the future

High-performance buildings are becoming a priority; buildings are the largest source of greenhouse gas emissions in Vancouver, producing more than half of the city’s total emissions each year, so the City of Vancouver is moving towards a zero-emissions target for new buildings. The goal is to get the majority of buildings there by 2025, with a final deadline of 2030.

The building code and various policies designed to achieve that objective include the city’s high buildings policy, which requires exceptionally tall, landmark towers to not only meet a high architectural standard but to follow one of two pathways: either meet stringent energy and greenhouse gas emission limits to produce a building that’s significantly more efficient than existing buildings, or achieve Passive House certification, which produces buildings that are upwards of 35 per cent more efficient than through the first pathway.

Aside from being a bit more rigorous in terms of the outcomes, Pander said Passive House certification offers “really good rigor in terms of third-party quality control, and then you’re automatically in this broad community of practice who understand what Passive House is and will be offering ideas, suggestions, advice and help.”

Monte Paulsen is a Passive House specialist for RDH Building Science, a Burnaby-based company which is serving multiple roles on the Nelson Street project, including as the certified Passive House consultant and façade engineer.

To illustrate how energy-efficient a Passive House building can be, Paulsen uses the example of a modest-sized, 2,500-square-foot, single-family home. If built to Passive House standards, the peak heat load — the amount of heat it needs maintain an interior temperature of 20C on the coldest hour of the coldest night in winter — is typically less than the heat produced by a cheap electric 1,500-watt hair dryer.

“The apartments at 1075 Nelson are both smaller and better insulated, so the heat required to keep one of these apartments at 20C on the coldest hour of the coldest night in winter would be closer to 500 watts — that’s five 100-watt light bulbs, or one big-screen TV,” he wrote in an email to the Courier.

“In practice, most of these apartments will remain warm in winter with no additional heat, while remaining comfortably cool in summer due to a combination of natural ventilation and a very small degree of light cooling.”

Dozens of homes and low-rise buildings in Vancouver already meet Passive House standards or are in the process of seeking approval. City council also recently approved a two-tower Passive House development by Landa Global Properties and Asia Standard Americas, which will feature a 43-storey and a 48-storey building at 1444 Alberni St. 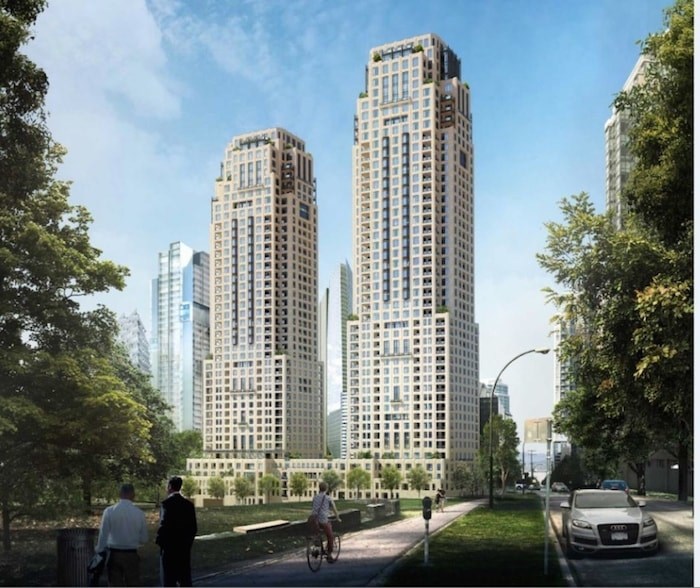 City council also recently approved a two-tower Passive House development by Landa Global Properties and Asia Standard Americas, which will feature a 43-storey and a 48-storey building at 1444 Alberni St. The taller of the two towers, which were designed by Musson Cattell Mackey Partnership, will reach 442 feet. It will be the city’s first Passive House tower development. Rendering Musson Cattell Mackey Partnership

Musson Cattell Mackey Partnership is working on the project with Robert A. M. Stern Architects of New York, which is the façade design architect.

The taller of the two towers will reach 442 feet. It will be the city’s first Passive House tower development.

At a proposed 555.5 feet, the Nelson Street tower would exceed the Alberni project benchmark although both developments would surpass existing Passive House height records globally.

The Bouleta in Bilbao, Spain is the reigning champion. It features two Passive House towers — 28 and 31 storeys — the tallest of which is 289 feet.

The 26-storey Cornell Tech tower in New York, places second at 272 feet, while the 20-storey RHW.2 building in Vienna, Austria, rounds out the top three positions at 256 feet.

At twice the height of the Bouleta tower, the proposed Nelson Street building will be a standout. It also attracted a crowd at the spring open house. One person checking out display boards expressed eagerness to see it approved.

“This density and Passive House — that is the future,” he said.

“He’s hit the nail on the head. That’s what this project is about,” said Gregory who told the Courier he’s “pushing the team to the limits” on the plans for the building.

Gregory said it’s “extremely difficult” to produce a Passive House building of this kind “with architectural significance,” but that’s a goal.

“There’s a lot of people that don’t want to build Passive House because it’s kind of a boxy, not that attractive looking. It might have small punch windows as opposed to what we’re trying to do,” he said.

“There is a certain look that Passive House generally yields and we’re trying to move away from that to make it more attractive to other people to take the same approach.”

Although building an energy-efficient tower to Passive House standards comes with challenges and increased costs, Pander said the city acknowledges those issues.

When the city published its zero-emissions building plan back in 2016, he said staff made it “very clear” that the city was heading to buildings that were going to look very much like Passive Houses — at all scales, from single-family homes to high-rise towers — but it also recognized it couldn’t make every developer adopt those standards until expertise was acquired and materials such as better-performance windows were easily available.

Such projects also enable the city to understand where its requirements need to be adjusted to make it easier to build them.

Pander estimates it may cost about five to seven per cent more to construct a Passive House building at the scale of the proposed Nelson Street tower. Modest non-cash incentives offered by city such as additional floor space to make up for space invested in thicker walls or space invested in high-performance ventilation equipment, can help offset that premium. Pander also said requests to add density to a site are looked at more favourably if a project contributes to the social good.

Progressive developers, he continued, also don’t want to wait until it’s mandatory, and when it’s perhaps less collaborative with the city, to build their first building this way.

Meanwhile, developers look at it as gaining a competitive advantage in other markets where it looks like regulations are going to go in a similar direction.

“The city has ways of dealing with it economically and, between the two of us, we’re trying to come up with a platform or a framework that allows us to do this building to Passive House standards and still be competitive with our competitors,” he said.

Support for high-performance buildings is coming from many quarters.

Vancouver’s Zero Emissions Building Exchange launched just over a year ago to help with knowledge exchange between early adopters aiming for zero-emission or near zero-emission buildings.

“There are always leaders in the industry at that top 10 or 20 per cent. For us to advance the implementation of these high-performance buildings quicker, we need those leaders to share that knowledge — all the barriers they face when they blaze the trail,” explained Christian Cianfrone, the organization’s executive director.

He said the Nelson project is “exciting” because, although Europe is at the forefront of producing energy-efficient buildings, there are very few highrises in the world that meet a standard like Passive House. New York and Vancouver are among North American cities making headlines in this regard.

One of the barriers, however, is “the headache of complexity.”

“That’s where most developers need to be convinced. Of course cost is important, and they need to address that but the other one is risk, right? This is doing things differently than we've been doing for 30 years. So how does that change our risk and schedule, or risk and durability of these buildings? Those are the questions I think developers are also asking,” Cianfrone said. “… [But] whatever incentive or carrots or sticks are required to allow these developers or project teams to do these projects today, it's extremely invaluable.”