Jasmine Wagner. Photo: Dwight Magee Shortly after graduating in 2010 with a Bachelor of Fine Arts, Jasmine Wagner learned she was pregnant. The mom-to-be was saddled with student debt and realized she needed to find work that could support her.
0 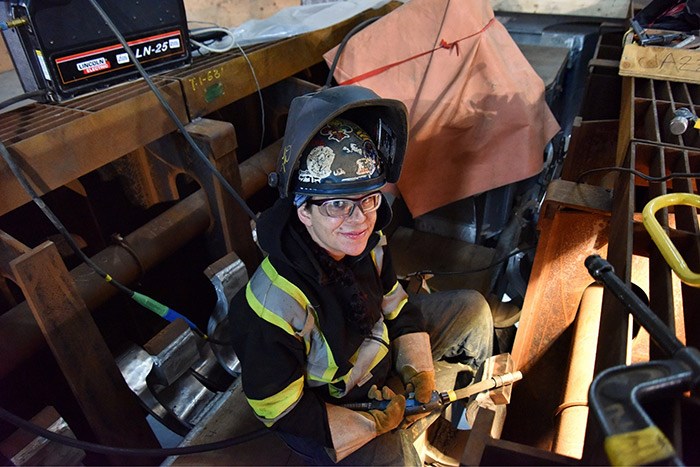 Shortly after graduating in 2010 with a Bachelor of Fine Arts, Jasmine Wagner learned she was pregnant. The mom-to-be was saddled with student debt and realized she needed to find work that could support her.

Wagner turned to the trades. She enrolled in a welding program at the United Association Piping Industry College of British Columbia and, before she even finished her pre-apprenticeship, was hired to work on the Kitimat Modernization Project.

This was thanks in part to a Project Labour Agreement (PLA) with the private sector that prioritized hiring local and Indigenous workers. It ensured that 87 per cent of the 9,791 workers on site came from B.C. and that up to 26 per cent of them were apprentices throughout the project.

“I can honestly say that this job changed my life,” Wagner said. “There is an immense amount of pride in being able to work and earn a decent living for your family, to support yourself and to build your community.”

The B.C. government has since created a similar framework that aims to create a strong local workforce. In July 2018, it introduced Community Benefits Agreements (CBAs), which establish equitable hiring practices for key public sector infrastructure projects in B.C.

The goal? To provide more opportunities for underrepresented groups in the trades, including women and Indigenous peoples.

Projects under the new framework include the Pattullo Bridge replacement, the Broadway SkyTrain line and the widening of the Trans-Canada Highway from Kamloops to the Alberta border.

These new agreements mandate the hiring of local workers, a practice which has not always been prioritized. In past instances, contractors for public sector projects tried to cut costs by hiring workers outside of B.C. and even Canada. For example, during construction of the Canada Line in Vancouver, some workers were brought in from Latin America and paid less than $5 per hour.

Those workers, who were from Costa Rica, later won a wage settlement, thanks to a Human Rights complaint launched by the Construction and Specialized Workers’ Union, and were awarded $2.5 million.

The agreements will also make sure tax revenues stay in the community and that local communities benefit from jobs, training and a legacy of employability.

Sonny Plante, a heavy equipment operator and member of the Nisga’a Nation, says that making the employment of Indigenous workers a priority “gives opportunity to not only the people [in his community], but people around the province itself, border to border.”

Another key feature of CBAs is the emphasis on paying workers an equitable wage. They include provisions for union wages and help avoid stoppages, such as strikes or lockouts, during construction. The goal is for key public infrastructure projects to finish on time and on budget.

CBAs have been used throughout North America for more than 20 years in cities like Los Angeles and New York.

About 7 in 10 British Columbians support building publicly funded projects through CBAs, according to an August 2018 online survey commissioned by the BC Building Trades Council. The survey featured a representative sample of 800 adults in B.C.

Support was highest among those who live in Southern B.C. (86 per cent), where the Pattullo Bridge replacement and improvements to Highway 1 were announced.

CBAs are strongly backed by women (75 per cent) and residents ages 18 to 34 (75 per cent). Two-thirds of British Columbians also support the Community Benefits policy of dedicating a quarter of the workforce on public projects to apprentices.

That has local workers like Meika Osetsky, a reinforcing ironworker, hopeful about her future.

“It would show my daughter that I’m a proud ironworking woman who can work alongside men in the trades,” Osetsky said.

You can get your coffee and food fix for dine-in and takeout from this local specialty roaster!
Jun 4, 2020 10:56 AM

These life-changing courses can help you further your education and expand your future
Jun 3, 2020 10:30 AM