WestJet Airlines Ltd. is removing Boeing 737 Max jets from its holiday schedule while Air Canada warns the impact of the grounded jet on its operations may ripple well into 2021.
0
Sep 6, 2019 7:00 AM By: The Canadian Press 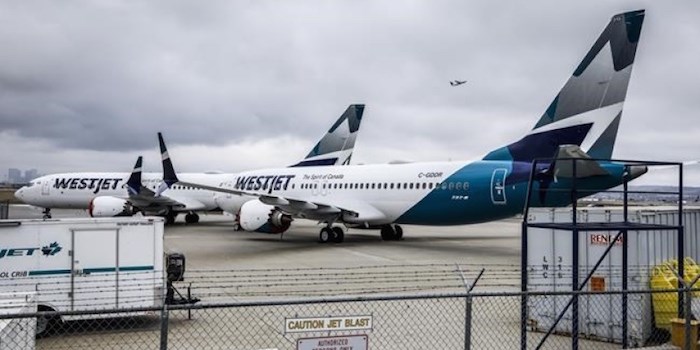 WestJet Airlines Ltd. says it is removing its grounded Boeing 737 Max jets from service until at least Jan. 5, affecting thousands of passengers with travel plans during the busy winter holiday season. Grounded WestJet Boeing 737 Max aircraft are shown at the airline’s facilities in Calgary, Tuesday, May 7, 2019. THE CANADIAN PRESS/Jeff McIntosh

WestJet Airlines Ltd. is removing Boeing 737 Max jets from its holiday schedule while Air Canada warns the impact of the grounded jet on its operations may ripple well into 2021.

WestJet, which had earlier scrubbed the 13 planes from schedules until Nov. 4, is the latest carrier to make the change after authorities across the globe banned the 737 Max from the skies following two fatal crashes in five months.

The chief financial officer at Air Canada, which announced last month it won't operate Max 8s until at least Jan. 8., said he expects Transport Canada may not greenlight the plane for takeoff until early next year.

"That's a little different than the other airlines because they can put those pilots back on 737 flying and utilize them better than we can," Rousseau said Wednesday at a transportation conference in Boston.

"So we've got a couple hundred pilots sitting around not doing a lot right now other than training and helping where they can."

The Airbus A320s that the 737 Maxes are set to replace are less fuel-efficient, piling on more costs. Air Canada, like WestJet, has also had to lease aircraft and cancel some routes to compensate for the Max 8's absence.

The country's largest airline — where 24 Max 8s make up about 10 per cent of its main fleet — faces a tougher third quarter thanks to the grounding, forecasting a two per cent decline in capacity from a year ago.

Until the grounding, the company had been expecting 12 more Max 8s by last July. The aircraft are parked on Boeing lots, delaying Air Canada's hiring of pilots.

"So for us to get those 12 planes back in the air, it's going to take longer than most other airlines," Rousseau said. Unless the dozen jetliners are delivered by July 2020, some of them may not make their maiden voyage until 2021, he suggested.

Fourteen more Max 8s were slated for delivery in the first half of 2020, but may now be pushed back. "I don't think a lot of those planes have been produced yet," Rousseau added.

Sunwing Airlines Inc. said last month that its four Maxes will be absent from the rotation until mid-May, with some 3,000 flights having been affected over the summer alone.

WestJet spokeswoman Lauren Stewart told The Canadian Press the airline will update schedules at the end of the week and start sending notifications with altered flight plans Sunday to passengers.

She said the company has maintained 98 per cent of its total planned departures since skies closed to the Max on March 13.

The crashes in Ethiopia and Indonesia killed a total of 346 people on board, including 18 Canadians.