This Vancouver building used to have streetcars going through it

If you're rushing to get to work, catch a bus, or meet a friend for coffee in Gastown, the unusually large street-level window of the building on the south side of Hastings at Carrall might not catch your eye.

If you're rushing to get to work, catch a bus, or meet a friend for coffee in Gastown, the unusually large street-level window of the building on the south side of Hastings at Carrall might not catch your eye. But look at it again. It's a pretty massive window that spans almost the entire side of the building. Interesting design quirk? Well, yes and no. When the building was built just over a hundred years ago, that wasn't a window, it was a massive opening. Through it passed two of Vancouver's interurban streetcar lines, bound to and from as far as New Westminster and Chilliwack.

The B.C. Electric Railway building was designed by Woodruff Marbery Somervell and John L. Putnam. The partners of their namesake architectural firm wound up designing a number of Vancouver landmarks in the early twentieth century. 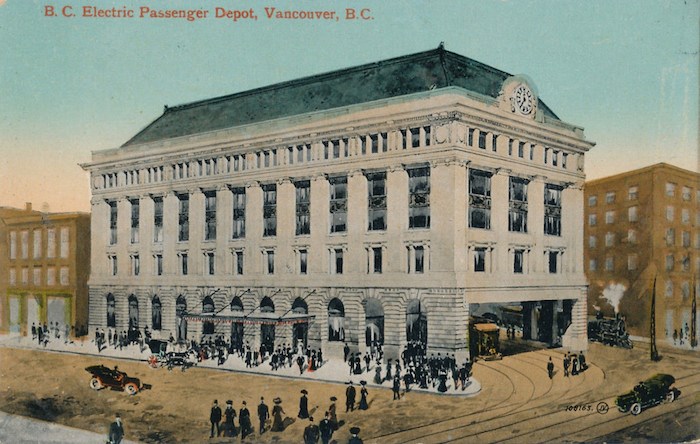 Situated at 425 Carrall Street, the B.C. Electric Railway building was both a terminus for two major interurban rail lines as well as the company's offices, holding up to 300 employees along with the general public using the tram station on the ground floor. The BCER was the biggest employer in the area at the time.

BCER's Central Park-Fraser Valley line, which provided service from New Westminster (1891) and Chilliwack (1910), and the Burnaby Lake line to New Westminster (1911) used the building as their terminus. "One track off Hastings Street split into two in the terminal while another track from Hastings, essentially for freight movement, found room between the west side of the new structure and the Canadian Pacific Railway line," explains Canada's Historic Places.

The interurbans were heavier more long-haul capable electric-powered streetcars, or trams, that connected outlying communities with Vancouver. In addition to moving people, they also moved freight, like milk from farms in the Fraser Valley. 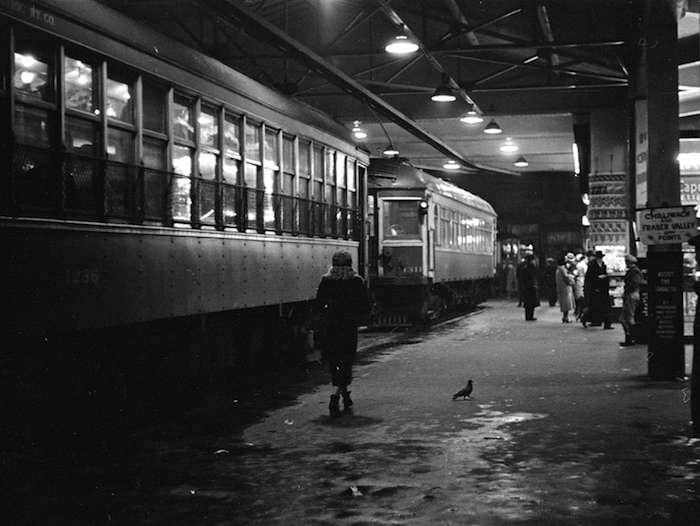 The car barns illuminated at night in the B.C. Electric Building at 425 Carrall Street (Vancouver Archives)

But by the late 1940s, BCER was shedding its rails and converting all the streetcar and interurban lines to trolley buses. The "Rails to Rubber" program spanned from 1948 to 1958. So by the late 1950s, the BCER's building's core use was about to become obsolete.

When the rails were torn out and the streetcars sent to the scrap heap, the arched passenger access points and the massive opening on the Hastings Street side were turned into windows. BC Electric rebranded as BC Hydro and moved to their Modernist digs at Nelson and Burrard.

A bank was the next ground floor tenant, and then into more recent years the building has been home to design and furnishing companies as well as tech businesses in the upper floors' offices.

A few architectural notes: The BCER terminal was built in an interpretation of the Second Empire Renaissance style. "The design of the building reflects the trend toward plainer lines and geometric decoration that had occurred by 1912 with the influence of the Art Nouveau era, and of innovations in the manufacture of building materials," adds the Vancouver Heritage Foundation. 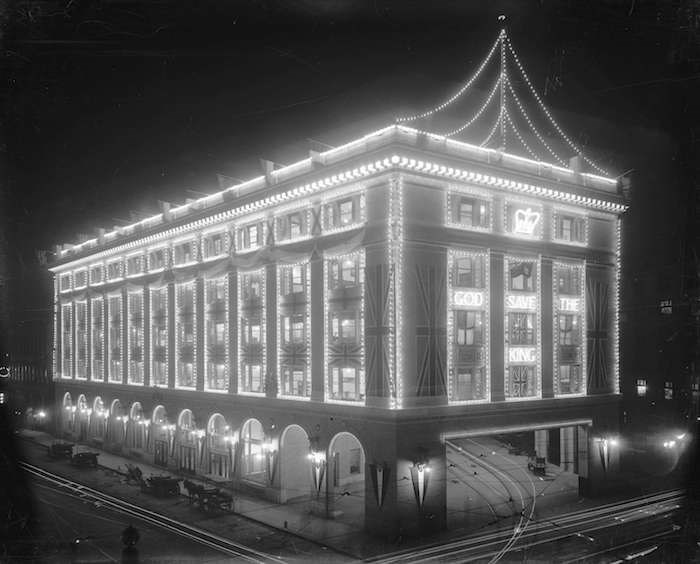 BC Electric Railway building illuminated for the visit of the Duke of Connaught, 1912 (Vancouver Archives)

"The original plans for the terminal included a Parisian mansard roof and more decoration than was finally applied. However, the building is a striking example of corporate stability and power," notes Canada's Historic Places.

Architects Sharp and Thompson designed a remodel of the roof and added an additional floor in 1945.

The BC Electric Railway building was recognized in 2003 for its heritage status, and was purchased by Anthem properties in 2012. The next time you're in the area, take a minute to take a closer look at its unique ground floor features, and imagine those red streetcars clanging their way in and out every day.