BC Ferries is loosening some restrictions and increasing capacity as summer travel within the province grows.
Jul 13, 2020 7:09 AM By: Roxanne Egan-Elliott 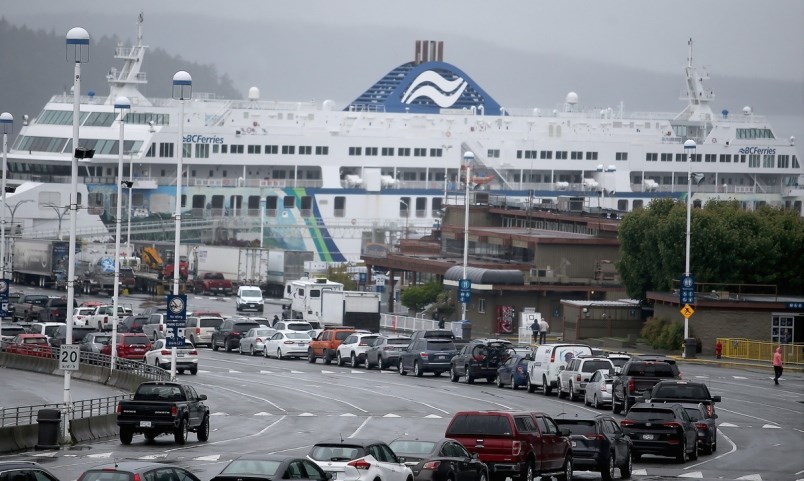 More than 300 BC Ferries sailings per month have been added on major routes between the Island and the Lower Mainland since the start of June. Photo by Adrian Lam/Times Colonist

BC Ferries is loosening some restrictions and increasing capacity as summer travel within the province grows.

Passenger numbers have risen to about 70 per cent of what they were at this time last year, said Tessa Humphries, communications manager for BC Ferries. In the early days of the pandemic, they were about 20 per cent of normal.

Passenger capacity had been capped at 50 per cent, but that restriction is being phased out to increase service, Humphries said.

That level was set by Transport Canada, which gave operators a choice between limiting capacity and implementing enhanced cleaning and physical- distancing measures.

Humphries said BC Ferries implemented both measures at first but has now decided to phase out the capacity limit. BC Ferries consulted with Transport Canada on the change, she said.

Enhanced physical-distancing and cleaning protocols, including clear plastic barriers and face- coverings, remain in place. Passengers are asked whether they’re experiencing COVID-19 symptoms prior to travel, and those in vehicles are allowed to remain inside their cars.

More than 300 sailings per month have been added on major routes between the Island and the Lower Mainland since the start of June. The company is aiming to keep capacity about 20 per cent above demand, Humphries said.

“We will have fewer sailings than in summer schedules of the past, but significantly more than what was available as a result of the service cuts in April,” she said.

“We did also hear from the communities that there was a struggle for capacity there,” Humphries said, adding that it wasn’t uncommon for sailings on Gulf Islands route to be completely booked.

Passengers travelling by car are encouraged to book in advance or choose less busy times to travel.

Humphries said BC Ferries expects it will take a couple of years before passenger numbers return to pre-pandemic levels.

The drop in ferry traffic has cost BC Ferries millions of dollars in lost revenue.

Humphries said the company is evaluating the financial situation daily and reopening onboard amenities will provide another revenue stream.

“But we’re all doing all of that carefully and gradually, as well as safely reintroducing these services,” she said.