Travelling via BC Ferries this long weekend? It's going to be a busy one

Long lines, hot asphalt and sailing waits for BC Ferries are as much a part of a West Coast summer long weekend as barbecues and ice cream.
0
Aug 29, 2019 7:36 AM By: Andrew Duffy 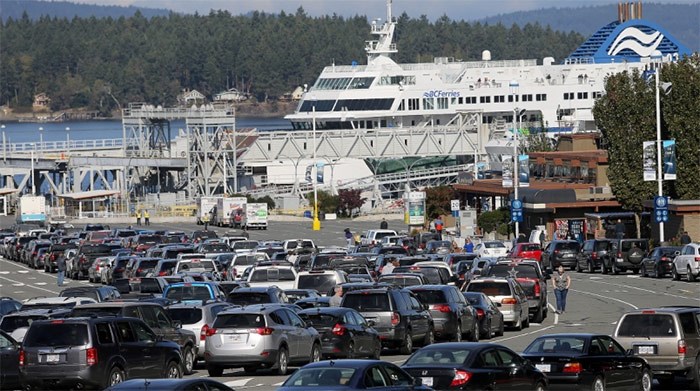 Long lines, hot asphalt and sailing waits are as much a part of a West Coast summer long weekend as barbecues and ice cream, and it appears those seemingly endless lines of cars will be around for years to come.

Despite the $1.4-billion budget BC Ferries has earmarked for terminal upgrades and $2.3 billion for vessels over the next 10 years, there’s no short-term relief on the way for those who travel the province’s waterways on the busiest weekends.

Mark Wilson, BC Ferries’ vice-president of strategy and community engagement, said some initiatives are being considered to deal with the crush of people and vehicles that turn up at the corporation’s 47 terminals on long weekends, but there’s no easy fix.

“[Capacity] is a piece that is talked about a lot,” he said. “You’re trying to balance the needs of efficiency and being fiscally responsible. You’re designing a system capable of handling your busiest times, yet structured to be efficient as you operate well below maximum capacity.

“Trying to find that balance is very key to us.”

BC Ferries has a pilot program to offer discounted fares for people willing to travel at off-peak times. That program, which has had some success, will be refined and expanded later this year.

But it’s unclear if there will be significant increases in the capacity of terminals or the number of vessels on busy routes.

Wilson said there have been and will continue to be discussions with the province about an extra vessel for its busiest route, between Swartz Bay and Tsawwassen.

“With strong demand in the summer, we are concerned about Route 1. That it is starting to reach peak capacity in the summer months,” he said. “There are options on the table.”

Wilson said the renovation of Swartz Bay terminal, set to begin in 2021 and be done over several phases in 10 years, will also help deal with peak demand. Swartz Bay is the system’s second-largest and second-busiest terminal after Tsawwassen — about 7.5 million passengers pass through each year.

The plan includes developing infrastructure and systems to handle increased use of transit, ride-sharing, the possibility of driverless vehicles and passenger-only ferries.

BC Ferries’ vision for a renewed Swartz Bay ferry terminal was unveiled this spring and includes options such as a waterfront boardwalk, a larger berth and a variety of improved amenities for both foot and vehicle passengers.

The Swartz Bay upgrade is one of several projects that will eat up the $1.4 billion budgeted for terminal upgrades.

The first phase will focus on improving road access, parking and pickup and drop-off areas at the terminal.

Nothing will be in place, however, to handle the crush of traffic expected Labour Day weekend, which kicks off with an expected rush to the terminals on Thursday evening.

To handle the extra traffic, BC Ferries is offering a few tips to travellers. The corporation notes that the most popular travel times are Thursday and Friday afternoons and Saturday morning, especially for traffic heading to Vancouver Island.

Labour Day Monday and the following Tuesday morning are typically the most popular times for people to return from the Island.

To avoid sailing waits, BC Ferries recommends making a reservation.

For those travelling without reservations, the best times to travel are posted on the travel planning pages at bcferries.com.

BC Ferries also warns that the parking lots at the major terminals fill up quickly on long weekends, and recommends walk-on passengers choose public transit or arrange to be dropped off at the terminal to avoid traffic congestion.

Travelling at off-peak times can be cheaper. BC Ferries’ Sunrise and Sunset savings plan runs until Sept. 4 and means early-morning sailings are discounted to $49, $59 or $69 for a one-way standard passenger vehicle and driver on the Tsawwassen-Swartz Bay, Tsawwassen-Duke Point and Horseshoe Bay-Departure Bay routes.