While the Queen of Capilano will likely be diesel-powered for the rest of its operating life, Bowen Island’s next ferry, in just over 20 years, could be all electric.
Bronwyn Beairsto Jan 4, 2019 3:22 PM

While the Queen of Capilano will likely be diesel-powered for the rest of its operating life, Bowen’s next ferry, in just over 20 years, could be all electric.

After the Undercurrent published the story “Electrifying ideas: advocates say the timing is ripe for a Bowen e-ferry” in its Dec. 13 edition, B.C. Ferries contacted the newspaper to weigh in on the e-ferry debate. 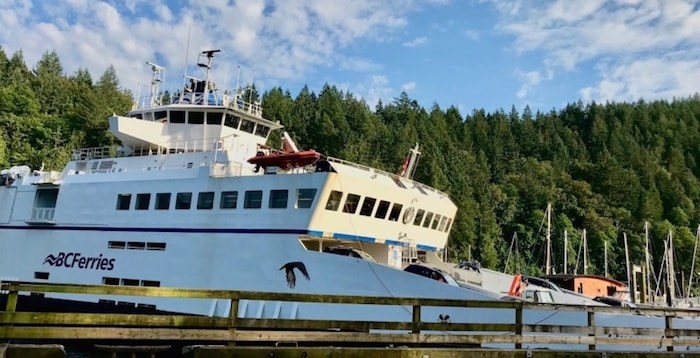 n the Undercurrent article, advocates argued that Bowen is a prime candidate for an e-ferry. Its ferry run makes up 25 per cent of Bowen’s total greenhouse gas emissions and e-ferries have been successful in runs similar to the Queen of Capilano’s, notably the Norwegian Ampere.

Mark Collins, president and CEO of BC Ferries, says that while the company is monitoring clean technologies closely, there are several hurdles standing between now and Bowen getting an e-ferry.

Not just charging ahead

“We provide lifeline service to Bowen Island and we don’t want to be experimenting on you,” says Collins. “We want to be going with stuff we know we can rely on.”

At a local level, Collins is concerned with the infrastructure needed to charge ferries.

“There is no standard way of connecting the ship to the grid,” says Collins. “Everybody is coming up with their own solution.

“You’re talking a lot of electricity and you’re around saltwater which is conductive. So you’ve got to be very careful.”

“When that happens, that’s when I think you’re really going to see ferry systems around the world going to a much more rapid electrification,” says Collins.

“It’s not actually electricity flowing in the traditional sense, rather it’s converted to magnetism and then converted back to electricity on the ship,” he says. “It’s much safer.”

Beyond the infrastructure, there’s the electricity required to charge the ships, which Collins says isn’t as plentiful in B.C. as in Norway.

When it comes down to it, it’s about money.

“There’s a big investment required not just in the ship but…in the shore side infrastructure,” says Collins. “In Norway, many of those investments are made directly by the government.

“All of these sorts of capital projects in B.C. are funded by BC Ferries and we are funded by ferry users. So there’s not there’s no tax money available for these kinds of investments.”

The ferry company is looking at investments system-wide and money is always a factor for the corporation. As the Vancouver Sun reported in September, the company has a $1.3 debt and plans on investing $3.1 billion over the next 12 years on upgrading old and building new ships.

Collins estimates that retrofitting the Queen of Capilano would cost between 15 and 20 million dollars. He says that an e-ferry would likely save around $1.5 million a year in fuel (it consumes around $2.5 million a year but they would spend $1 million on electricity) making it a 12 to 15 year payback. Advocates in the Undercurrentarticle estimated a four-year return on investment, based on the Ampere, though that was for a new ferry.

Collins maintains that ferry battery technology is still quite new and fluid. He says that no battery exists that could power one of BC Ferries’ largest vessels –the spirit class ships. The Spirit of Vancouver and Spirit of British Columbia have a 2,100 passenger capacity and together consume, Collins says, 18 per cent of the fuel in the entire fleet.

“We have relatively few runs where batteries of today are ready to give us full electric,” he says.

Collins notes that BC Ferries’ runs, Bowen not included, are generally longer than in Norway (the country best known for its ferry innovation, including the Ampere, the world’s first fully electric car ferry) and are frequently “lifeline” services. The bigger the ferry, the longer the run, the more advanced the battery technology necessary.

“So far the best available technology that we can act on right now with certainty for ferry users is natural gas,” says Collins.

The company has converted one spirit class ferry to natural gas while another is in the process of conversion. It also added three LNG-diesel hybrids in 2016 –the Salish class ships.

BC Ferries has two LNG-electric hybrid ferries on order and is looking at getting between four and eight more, built with Richmond’s Corvus Energy batteries.

With pressure for green technologies increasing worldwide, Collins says that he does anticipate that over the next decade or two, with technology advancing rapidly, e-ferries should be normalized. With that in mind, all the new LNG hybrid vessels are designed to be able to go all-electric should the time come.

For the moment, having the backup fossil fuel backup allows a service reliability that Collins says full battery is not quite ready for.

“Electrification is a zero emission technology, we get that, but until electric technology and electricity is available, we need to take steps to get our [greenhouse gas] profile down now,” he says.

Back to the bay

When it comes to the $250 million Horseshoe Bay terminal upgrade, Collins says that the company is anticipating electrification.

He notes that the company is considering how future ferries will charge when redesigning the terminal’s three berths and the ramps.

He says that the company is also working with BC Hydro on electrical capacity.

“We’re anticipating the future,” he says.

And for e-ferry proponents, there is some good news.

“I would anticipate a run like the Queen of Capilano’s onto Bowen Island, when she is replaced, she could very feasibly be replaced at end of life by a fully electric ferry,” says Collins.