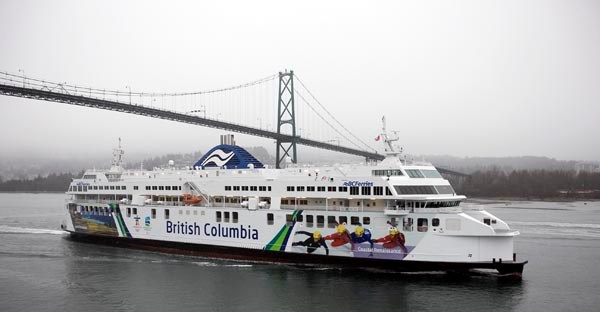 The Coastal Renaissance, as seen arriving in British Columbia for the first time in 2007. Photo: BC Ferries

A mechanical failure resulted in passengers on the BC Ferries vessel Coastal Renaissance being stranded for six hours off Nanaimo on Sunday night.

The Tsawwassen-bound vessel had a mechanical failure just minutes after leaving Duke Point at 8:15 p.m.

“It went quiet and then after a few minutes they said that there had been loss of power and they were looking into it,” Jason Cleghorn, a passenger from Surrey, told CHEK News.

Passengers were told the sudden power loss was caused by a problem with a fused breaker.

The vessel was left to drift until the anchors were dropped near Jack Point.

Tugboats arrived several hours later, and passengers were able to disembark at Duke Point about 2 a.m.

“It takes a lot of co-ordination with the tugs to get a vessel like a ferry, in this case, the Coastal Renaissance, into Duke Point, so there are a number of safety procedures that have to take place,” BC Ferries spokeswoman Astrid Chang told CHEK.

Earlier in the day, two BC Ferries vessels joined rescue efforts as a small boat began taking on water east of Nanaimo.

Several coast guard vessels and the ferries Queen of Oak Bay and Queen of Cowichan responded to the call.

Three people were taken off the stricken boat and a spokeswoman at the rescue co-ordination centre said no one was hurt.