BC Ferries unveils plans for revamp of Horseshoe Bay terminal

BC Ferries is considering a revamp of the terminal building as well as extensive blasting up the hillside to facilitate a second exit road at Horseshoe Bay.
Sep 18, 2019 11:45 AM By: Jeremy Shepherd 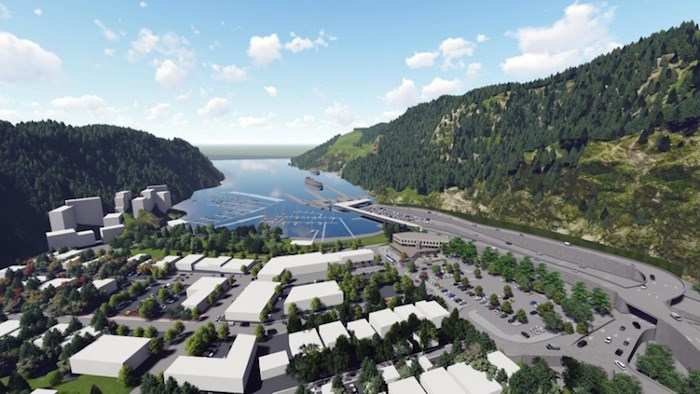 The revamped terminal would include a second exit road and a connection to the Spirit Trail. Image courtesy BC Ferries

Due to a possible overload, drivers are asked to pull up as close as possible to get a look at possible changes at Horseshoe Bay ferry terminal.

BC Ferries is considering a revamp of the terminal building as well as extensive blasting up the hillside to facilitate a second exit road at Horseshoe Bay.

The proposed changes, still subject to change, were announced in West Vancouver council Monday evening during a presentation by BC Ferries terminal development manager Brian Green.

“The terminal is reaching capacity,” he said, underscoring the need to replace old infrastructure and respond to changing travel patterns.

The long-term plan is to create: “a transportation and community hub” that would integrate into Horseshoe Bay, Green said. Ideally, construction will begin within five years, according to BC Ferries.

Plans include a new exit from Keith Road designed to ease the trip for drivers navigating the gap between the Horseshoe Bay village and Highway 1. The second exit road, which would allow two vessels to load and unload simultaneously, would require blasting up the hillside, Green said.

“To ensure that we’re not reducing the number of vehicle holding lanes within the terminal, the proposal is to push that second exit road into that cliff side,” Green explained.

Suggesting a map of the terminal resembled an “impermeable surface wasteland,” Coun. Nora Gambioli queried Green about the risks posed by heavy rainfall on a hillside.

There are plans to retain green space and incorporate a stormwater management plan, Green assured council.

Now moving 3.7 million passengers per year, the Horseshoe Bay terminal is nearing capacity, according to a spokesman for B.C. Ferries. Image courtesy BC Ferries

Other possible changes include adding an extra storey on the terminal building to facilitate “expanded administrative space” and a new control tower. The terminal would also connect to the Spirit Trail and provide two levels of underground parking with pickup and drop-off spots.

The new terminal would incorporate public space, Green said, “rather than the terminal turning its back onto the village.” To further that aim, BC Ferries is proposing to close the end of Bay Street to “create that seamless transition between the park space and the terminal,” Green said.

BC Ferries employs 500 workers at the terminal, most of whom work on the ferries.

“We do have significant recruitment issues at this terminal,” Green acknowledged. However, there are no plans for workforce housing on the site.

“We’re leaseholders,” Green said, explaining he didn’t know if building rental housing would be permitted under the terms of that lease.

The Horseshoe Bay redevelopment is part of BC Ferries’ 12-year capital plan to replace old vessels and improve terminals.

BC Ferries is set to host a workshop on the proposed changes Oct. 7 from 5 to 8 p.m. at Gleneagles Community Centre.

Commuters can also vote on their preferred options for the site online.