BC Ferries: 'Maybe years to get back ferry system that we knew' 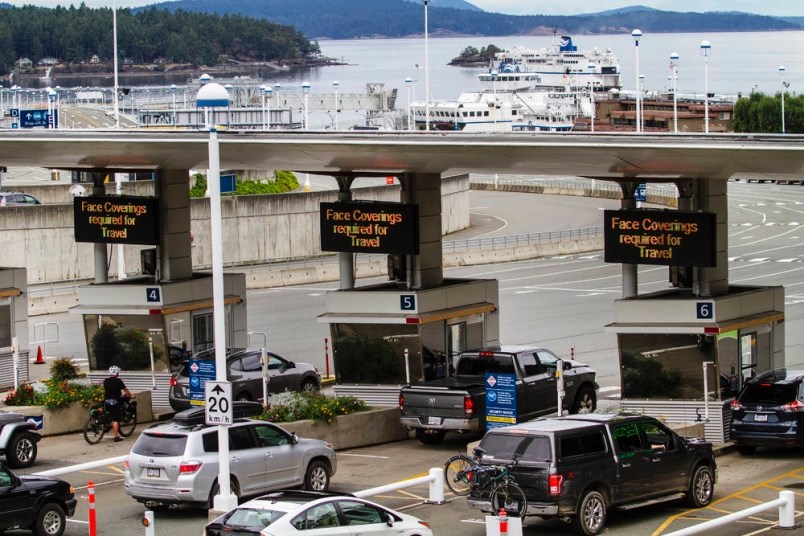 BC Ferries is expanding its mask-wearing rules as the pandemic’s uncertain lifespan forces the company to conserve resources so it can continue serving coastal communities even as revenue declines.

The guiding principle is to protect the core of the service as a lifeline to its 47 ports of call, Mark Collins, BC Ferries president and chief executive, said at Thursday’s annual general meeting.

“This is a marathon, not a sprint. It is going to take some time — maybe years — to get back to the ferry system that we knew,” he said.

“But we are making progress. As of Sept. 7, the ferry system capacity will be back to 100 per cent of normal pre-COVID ferry capacity levels.”

BC Ferries had been recording strong performance in the 2019-2020 fiscal year until its final two weeks when the pandemic hit. Its fiscal year runs from April to the end of March.

Last year, BC Ferries carried 22 million passengers and nine million vehicles on 180,000 sailings, an increase by 4,200 from the previous year. It also carried about $8 billion worth of cargo.

But with the onset of the pandemic, “we lost 80 per cent of our traffic in about 12 days,” Collins said. “It fell off the cliff. … It was absolutely unprecedented.”

Today, passenger numbers have recovered somewhat and are down 21 to 25 per cent of what is typical, he said.

The corporation also saw revenues rise by $15.7 million, or 1.7 per cent, year-over-year, because of factors such as a larger contribution from the B.C. government and a change from fuel rebates to a fuel surcharge.

Operating expenses in the past fiscal year increased by $35.4 million or 4.3 per cent versus the prior year.

BC Ferries also released its first quarter results for the current fiscal year showing that the novel coronavirus drove its net losses to $62 million — a drop from net earnings of $12.2 million for the same months last year. Revenue for the first quarter was $137.4 million — a decrease of $109 million year over year. The first quarter covers April, May and June.

The hit to BC Ferries’ earnings was partly offset by reducing operating expenses by $36.7 million in those months.

A total of 2.2 million passengers and 1.3 million vehicles were carried this past quarter, down by 61.5 per cent and 46.7 per cent, respectively, compared to the same quarter in 2019.

Collins praised staff throughout the system for their response to the pandemic, including those who are not seen by passengers. “Our supply chain team went up against the world to find hand sanitizer. It was really crazy times.”

The future is not going to be easy, Collins said. “There are still tough decisions ahead. But I’m confident that we’re making good progress.”

Resources have been quite constrained, he said. New capital projects are on hold in order to focus on providing essential services. “The financial situation of the company has taken a real beating,” Collins said.

“Some money we might have spent on a dock, we are now buying fuel with it, paying wages, because that’s the most important thing right now. We can reverse that decision when circumstances change.”

The pause on major projects comes as BC Ferries figures that within the next 14 years, it will need to replace 17 vessels.

BC Ferries welcomed recent news that it now qualifies to apply under a federal-provincial funding program to support transit organizations, like BC Transit.

Meanwhile, as of Monday, masks will be mandatory inside terminals and ships, unless someone is inside their vehicle or eating in a designated area, Collins said. Masks have only been required if someone was unable to physically distance themselves from others.

Collins announced that a new website providing more options and information, including reservations and e-commerce, will be introduced shortly.

Also, Transport Canada will be insisting at some point on a return to its policy of prohibiting passengers from staying in their vehicle during a trip, he said. The date is not known yet.

A citizen asking about priority boarding for residents was told by Collins: “We’ve been saying to communities for a number of years that BC Ferries is prepared to consider resident priority loading if it is the will of the community. That’s an important piece.”

The method of loading and the issue of who gets to go to the front of the line is “for the community leadership and communities to decide what is right for them,” he said. BC Ferries temporarily imposed resident-first boarding earlier in the pandemic.