Canada Jetlines – the Vancouver-based ultra-low-cost air carrier that has been planning to launch for years – has released new branding and airplane liveries, but the carrier has yet to gain respect from rivals.
Jun 19, 2019 7:09 AM By: Glen Korstrom

Canada Jetlines – the Vancouver-based ultra-low-cost air carrier that has been planning to launch for years – has released new branding and airplane liveries, but the carrier has yet to gain respect from rivals.

When Vancouver-based Canada Jetlines (TSX:JET) first stated an aim to launch flights that had the lowest possible base fare, with fees to cover everything from carry-on bags, to seat selection to cups of coffee, it was early 2014, and the planned launch date was the end of that year. 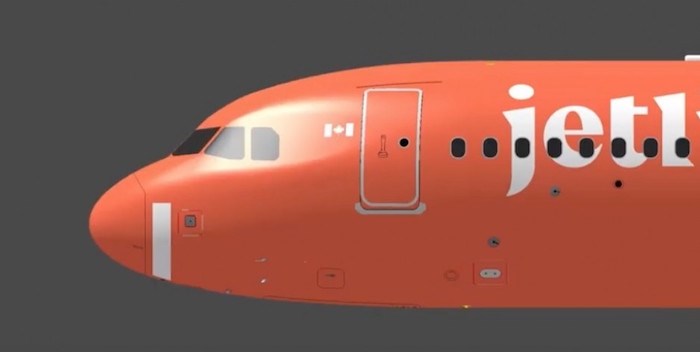 Canada Jetlines has had plans to launch as an ultra-low-cost carrier since 2014. Photo via jetlines.ca

The airline on June 18 reiterated that its launch date is set for December 17 – a date first revealed in April – and it said that advertising agency Cossette has helped it craft its new brand identity.

That Quebec City-based communications agency helped Canada Jetlines create what the airline calls a “cheeky, rebellious identity system, as well as a brand promise anchored in the unapologetic and honest truth: ‘Flying sucks less when you pay less.’”

The airline was upfront in saying that “flying will still suck. There’s not much anyone can do about man-spreading seatmates, or tiny toilet stalls. But it will suck less when you pay less.”

That message, the airline believes, will help make it “deliberately distinct from the expensive goliath incumbents in Canada,” such as Air Canada and WestJet.

Canada Jetlines’ new logo uses the outline of a plane to create part of the likeness of a face, with a curved line added to create a smirk.

Its logo is set to be on a wide range of surfaces, including the livery, luggage and airsickness bags.

Investors, and competitors, however, have yet to take Canada Jetlines seriously.

“I question very much whether they will ever get in the air,” David Tait, executive chairman of Flair Airlines, told Business in Vancouver last week. Flair, last summer, transformed its own operations into being an ultra-low-cost carrier from being an air-charter service.

When BIV asked Tait if he thought that the chance of Jetlines launching flights would be less than 50%, he said, “in my book, ‘Yes,’ [although] I have been wrong with things before as my wife will be happy to tell you. I think the longer it drags out, the less chance that it is ever going to fly. I’m surprised that they’ve managed to sustain themselves on coming-next-year promises for as long as they have.”

Tait is not alone in his skepticism.

BIV earlier this year asked Steven Greenaway, the president of the ultra-low-cost carrier Swoop, about Canada Jetlines, and he did not sound concerned.

“For me, they’ll become serious when they launch,” he said. “Until they actually start flying, it is a moot point for me.”

Canada Jetlines’ has entered into a letter of intent with partner SmartLynx Airlines SIA to lease two Airbus A320 planes that will be available for delivery in the fall.

Its plan is to eventually ramp up to operate flights across Canada and provide non-stop service from Canada to the United States, Mexico and the Caribbean.