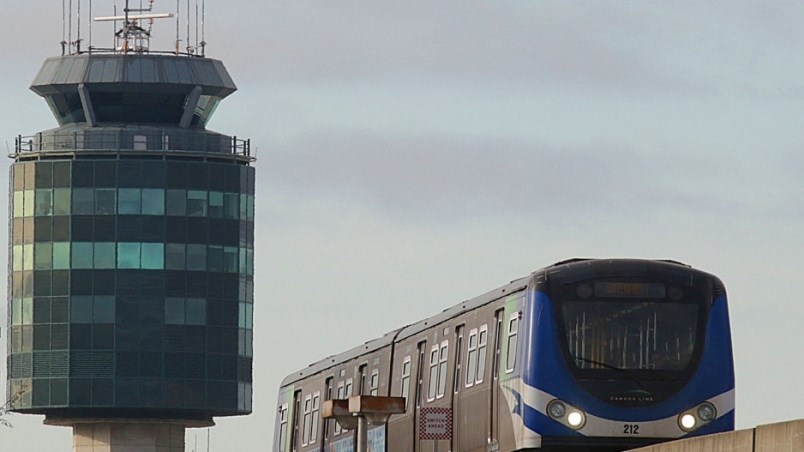 The Canada Line, which connects Richmond, Vancouver and YVR airport, has broken records since it opened 10 years ago, according to TransLink. File photo

The Canada Line has been breaking records since it first opened ten years ago for the 2010 Winter Olympics.

Originally projected to reach just 120,000 daily boardings by 2025, it surpassed that number around 2011 or 2012, according to a TransLink spokesperson, who added that ridership was reported out less frequently then as there weren’t fare gates or Compass cards to track data.

On an average weekday last year, the Canada Line had an average of 150,000 boardings, continuing to “outperform projections,” according to TransLink.

That wasn’t the only record the line broke in 2019, according to the transit authority. For the first time in its history, the Canada Line had more than 50 million annual boardings last year, which represents a 30 per cent increase in ridership since 2010.

“We are proud to celebrate the 10-year anniversary of the Olympics today with the region,” said TransLink CEO Kevin Desmond.

“With 1.58 million trips taken each day during the Olympics, transit was an integral part of how the world experienced the Winter Games. The Olympics were a time when many people realized just how convenient public transit is.”

During the Olympic Games, there were approximately 230,000 daily trips on the Canada Line.

The system, which opened in August 2009, took four years to build and cost approximately $2.1 billion.

The Canada Line spans a 19-kilometre route between Richmond, YVR and Vancouver, with 16 stations. The route includes two bridges and nine kilometres of tunnel.

According to TransLink, 20 per cent of all YVR passengers use the Canada Line for their journey to or from the airport.

Last month, TransLink added four new train cars to the Canada Line, which increased capacity by 15 per cent or about 800 riders. An additional eight cars will be rolled out this spring, which will increase total capacity by 35 per cent, or another 1,200 riders, during peak travel periods.

Richmond will also be getting a new Canada Line station, on the northeast corner of No. 3 Road and Capstan Way, which could be completed by 2022.