The Canada Line in Vancouver. Photo by Volodymyr Kyrylyuk / Shutterstock

Think big, stay connected and work with your partners seemed to be the theme at “Metro Vancouver on the Move,” a panel discussion organized by the Richmond Chamber of Commerce last week, where the two CEOs were joined by the Vancouver Fraser Port Authority’s president and CEO, Robin Silvester.

Richmond pointedly told TransLink’s CEO to “be bold” with their transit expansion, for example, to not just dig the tunnel halfway to UBC.

“Find the money to do this, don’t go small, go big because infrastructure is such an enabler in so many ways,” he said. He added that, looking at the example of the Canada Line, there should be four or five times trains like that in the area.

To highlight the problems that inadequate transit cause for his sector, Richmond recounted that the owner of a YVR restaurant is paying for cabs for his employees to arrive early in the morning and leave late at night because of the lack of transportation options. 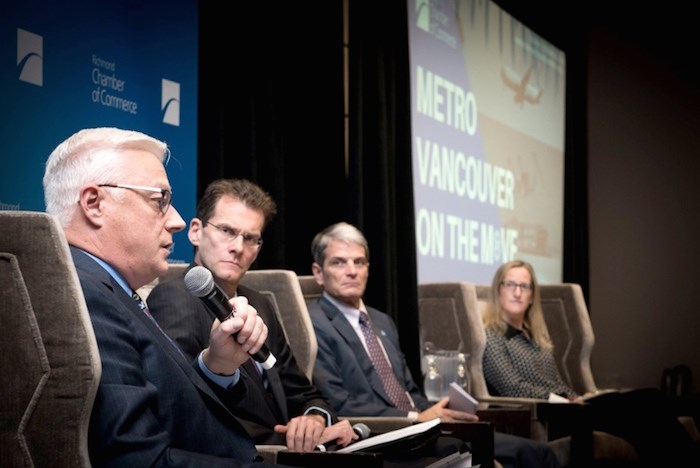 YVR CEO Craig Richmond, the port’s CEO Robin Silvester and TransLink CEO Kevin Desmond were part of a panel discussion put on by the Richmond Chamber of Commerce this week. Photo by Rob Newell

The airport is also able to transport crab to Brisbane in its refrigerated cargo planes, but if the crab can’t get to the airport because of congestion, it can’t get to Australia, he said. With the congestion on Russ Baker Way increasing, this could become a greater problem.

Twenty per cent of passengers flying out of YVR come to the airport with the Canada Line, which is low globally but very high by North American standards. But people living farther out who can’t access the Canada Line will get increasingly caught up in congestion to the airport.

“If they can’t get to the airport, we can’t put them on an airplane,” Richmond said.

TransLink’s Desmond agreed the airport, the transit authority and the port are “completely and utterly connected.”

He said lessons have been learned, for example, the Canada Line is an example of infrastructure whose use was under-estimated and under-planned.

Desmond called the Canada Line, which just celebrated its 10th anniversary, a “smart investment,” but he pointed out there was discussion at the time whether it should even be built.

Those planning new transit often get caught up in their smaller municipalities, asking whether people will want new transit projects, what the local impact will be, but, in the end, the Canada Line is an example of how a project was too small already at opening.

But, he said, he hopes the region has learned that lesson, adding that “help is on its way” for the Canada Line in the form of larger cars being delivered next year which should increase capacity by 25 per cent.