I rode the Double Decker Test Bus. Here's what I learned. (PHOTOS)

TransLink is testing out some double decker buses on select commuter routes in Metro Vancouver. We took a ride. Here's what we learned.

This November, TransLink revealed the launch of a pilot program to employ double decker buses on select commuter-oriented routes in Metro Vancouver.

On this very foggy Thursday morning, I hopped on one of the test double deckers running on route 620, which goes from the Tsawwassen Ferry Terminal and Bridgeport Station. I grabbed the bus from the Ladner Exchange, and headed right to the top--of course!

The appeal of the double decker buses is their capacity (though the novelty factor was not lost on many of us on board). Each of the two test buses has its own seating configuration, with one allowing 80 riders seated, and the other 85. 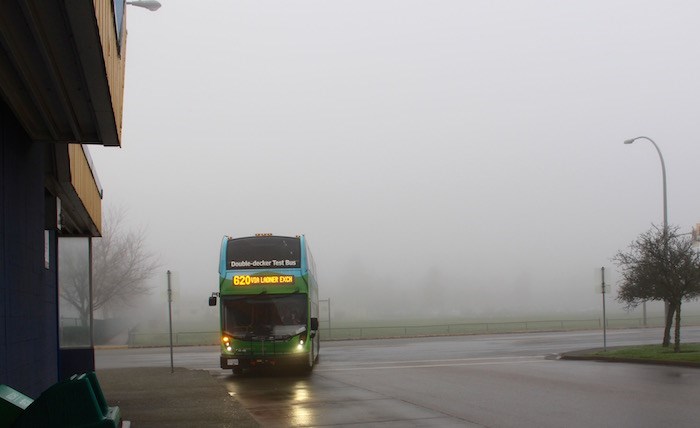 Coast Mountain Bus Company's Rod Anderson, who is acting as an "ambassador" for the test program, was riding along this morning to make himself available to talk to riders. Anderson says that the expanded seating options are by far the biggest positive aspect of the feedback he's received during the last couple of weeks.

Another rider in passing remarked that the drawback to the top level was that it does have a low ceiling, forcing some passengers to have to duck a little (at 5'5" this was a non-issue for me, though). "But it sure beats standing up on one of the other buses," he added with a smile. 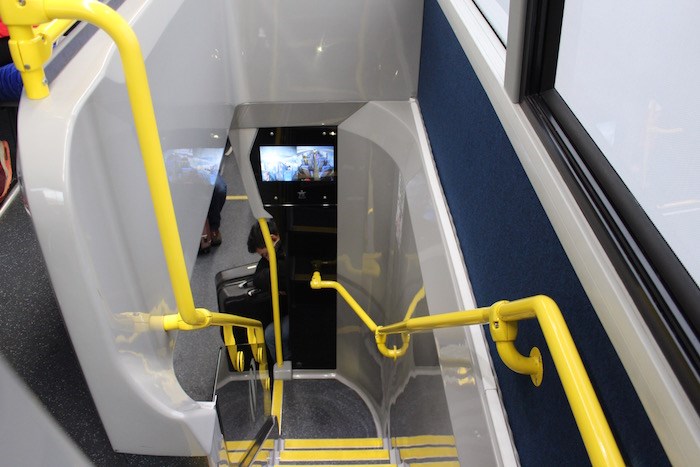 The way to the top is via a fairly narrow single staircase to the rear of the driver's seat. Once you board, you can immediately see on a monitor if there are seats open at the top.

Anderson says that the double deckers can match the speed and handling of the other buses being used on these commuter routes, though he acknowledges that the equipment itself is quite different for the operators, so many drivers are being a bit cautious as they learn how to work the bus. 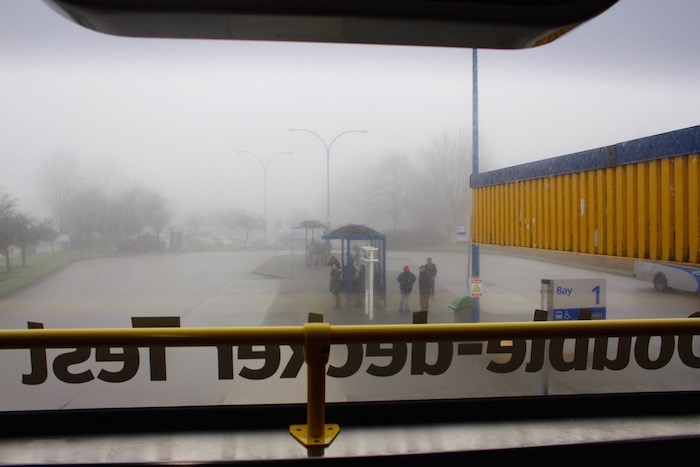 From where I sat, it did feel a little more "wavy" up top; probably not a good spot if you get motion sickness. Because of the low ceilings, it did seem like conversations from other seats were more audible, too, if you're riding without headphones.

Going through the Massey Tunnel was definitely interesting on the double decker. The bus is 4.1 metres tall, and the Massey Tunnel has a posted 4.15 metres clearance, so it's working with a mere 0.05m clearance. But, yes, it absolutely fits.* 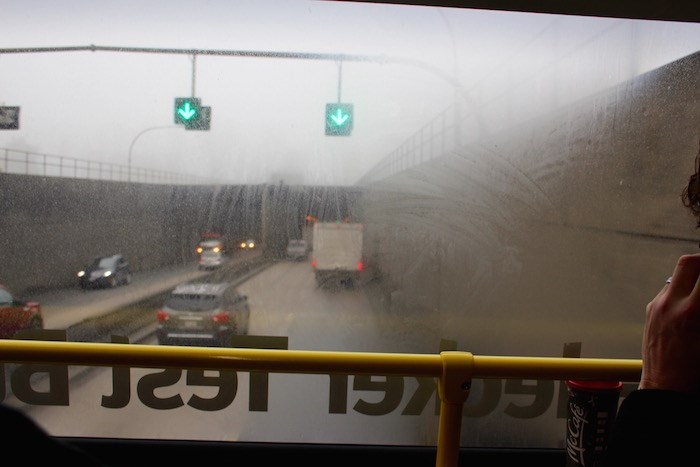 One spot that Anderson says has been a hold-up for trying the bus out on a route like the 601 are power lines. He says that in a residential area where the 601 ends up, Tsawwassen Heights, they've had to have power lines moved, and the bus has not yet taken on the 601 for that reason.

While it might be fun to see the double decker buses on Vancouver's streets, Anderson says TransLink is definitely not going to use them on something like the 99-B Line. That's because the frequency of stops and volume of passengers coming off and on, and using the stairs, would kill the efficiency of the route. 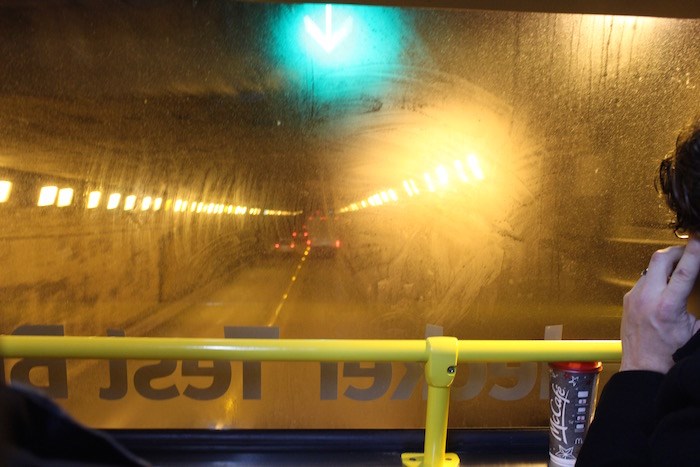 Inside the Massey Tunnel (Lindsay William-Ross/Vancouver Is Awesome)

The double deckers are with us on loan for three months, during which time TransLink will continue to test run them on select "suburban" routes, and continue to collect feedback from riders. If you happen to catch one, you may also see Anderson or another rep riding along for just that purpose.

These are the test routes: 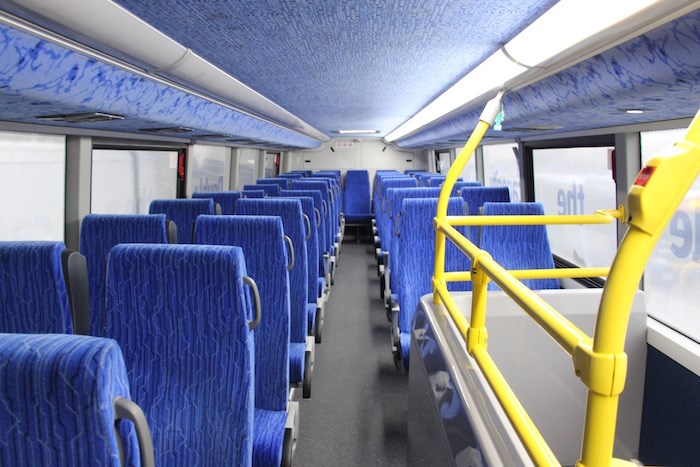 Ultimately, Anderson projects that once the three months are up, TransLink will be better informed to modify their order for the buses. Right now the plan is to bring 32 of the double deckers into the fleet by 2019. 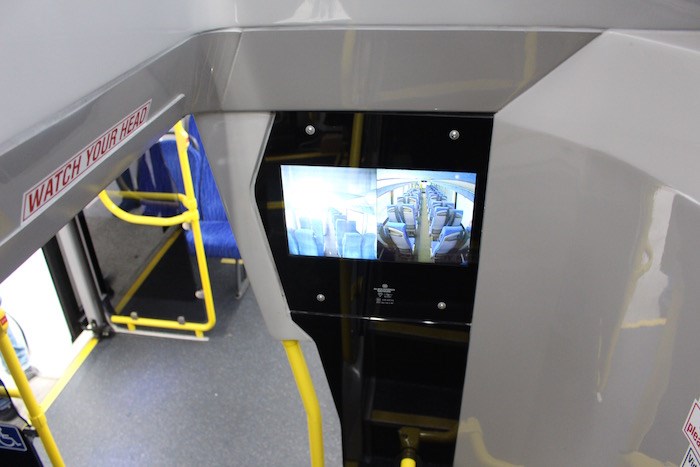 When you board, this monitor shows what the seating is like upstairs (Lindsay William-Ross/Vancouver Is Awesome)

*Update 12/8/17: Initially this post read "half-metre" for the amount of space between the bus roof and the top of the Massey Tunnel, as that was a direct quote from Anderson as we passed through the middle portion of the tunnel.

However, as the height of the bus and clearance of the tunnel indicate, there is a 0.05m, or 5cm, difference/clearance.

In speaking with TransLink Thursday afternoon, it was clarified that while those are the accurate figures, the tunnel's lowest clearance point is 4.15 (likely at the openings), and that for the majority of the tunnel there is more clearance room, which is probably why the rep stated "half-metre" during our ride.