Instead of using your hand nearest to the door, the Dutch Reach teaches drivers to use their far hand, reaching across your body to open the door.
North Shore News Jul 19, 2019 2:19 PM

Time slowed. Everything looked sharper, more colourful. I could see the car door open one car length ahead of me by what seemed like a mile. I had minutes to respond with whatever evasive action I could take...BAM. 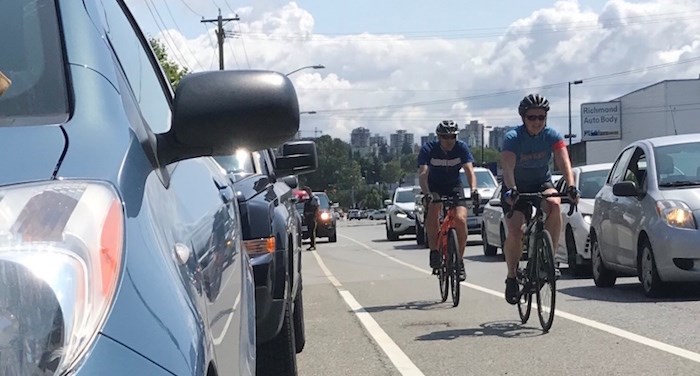 Drivers can help keep cyclists safe in the ‘door zone’ by practising the ‘Dutch Reach,’ a technique that includes a look back before opening a car door. Photo by Andy Prest/North Shore News

I woke up on the ground with chirping birds flying around my head like in the cartoons. Turns out the brain does make it seem like you have time to respond in a crisis, even when you don’t. The reality was, that door was a lot closer than my brain was telling me so BOOM. Twelve years later, I still can’t turn my neck.

If only the driver had known about the “Dutch Reach.” Do you?

When I ride alongside parked cars, I am hyper wary – especially where bike lanes are marked right against parking. I look for any signs of vehicle occupancy: heads in the car, taillights, and doors ajar are all indicators and I move to the left accordingly. Any angle change in the car tires or vehicle itself is also a sign. If the door doesn’t get me, maybe the car will just hit me pulling out. While better than tea leaves at predicting chances of a successful transit, this daily prognostication becomes wearing.

No wonder people are reluctant to ride a bike to school. The other day I watched with dismay as a young man cycled down 23rd from Lonsdale to get to Carson Graham during the morning rush. 23rd is a significant driving route, and is also a bike route in the North Vancouver bicycle master plan. Unfortunately its current safety for cyclists is highly questionable. Drivers (myself included) were charging down 23rd alongside parked vehicles. Where was that young man possibly going to fit without taking up the lane?

At Chesterfield where a car was turning left, I took a moment to check his whereabouts. The person on the bike had disappeared! Oh, not quite. There he was riding safely down the sidewalk. I drew a breath of relief for him. But what he had resorted to (sidewalk cycling) is illegal.

In Vancouver, one in seven crashes involving a person on a bicycle is caused by doors opening. So that’s 15 per cent of crashes that could be averted altogether. Advocacy groups worldwide have been promoting the Dutch Reach as a means to prevent door crashes. Instead of using your hand nearest to the door, the Dutch Reach teaches drivers to use their far hand, reaching across your body to open the door. Using your far hand forces you to face toward the road and therefore “look” before you “open.”

Fear of doors is typically why people on a bike may not cede the driving lane to cars. It’s not because they are impolite or just plain greedy. They are probably deathly afraid of the door zone. To avoid the door zone you have to ride at least one meter away from cars, which on 23rd and many other roads, will put you in the lane of people driving. We here at Pedal Pushers would like to say a collective “sorry” to drivers, but what is the alternative?

Learning and practicing the Dutch Reach is helping to keep people safer, but the best solution is to ensure that transportation engineers do not create the conflict in the first place. Why put a bike lane next to parked cars? That just makes no sense. In the meantime, until the potential for conflicts is resolved, please practice the Dutch Reach and be safe out there.

NOTE: We at Pedal Pushers are saddened by Mike McIntosh’s dooring death last January as charges are laid against a driver who opened his door. It is a tragedy for everyone involved. The fine of $81 is irrelevant, what is important is prevention through better road designs that keep everyone safe.

The North Shore Pedal Pushers are Heather Drugge and Antje Wahl. The guy who makes the column readable, Dan Campbell, prefers driving. See – we can all work together.