The perennial nightmare that is back-to-school traffic might not be too horrific come next week. About 30 kilometres of road work is being done across Vancouver this year.
0
Aug 28, 2019 3:08 PM By: John Kurucz 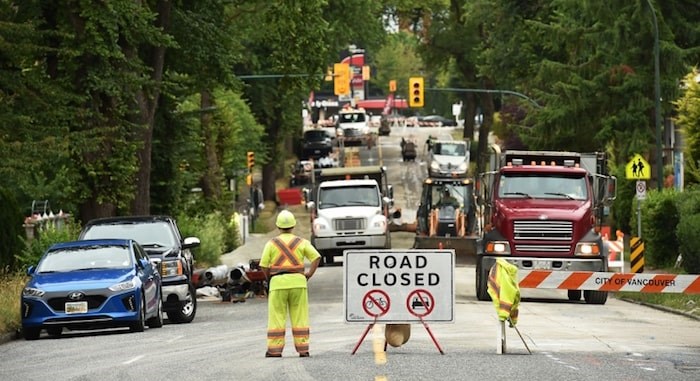 The perennial nightmare that is back-to-school traffic might not be too horrific come next week.

The city issued a news release Wednesday morning noting the progress of both long- and short-term- projects. About 30 kilometres of road work is being done across Vancouver this year.

The good news includes an end to the 12th Avenue kerfuffle.

Ditto for work on St. Catherines and Prince Albert streets, as sewer main replacements should be done before the first recess bell next week. Upgrades near Boundary Road and East First Avenue, including water main replacement, street and sidewalk rehabilitation and updated traffic signals, will be done by the end of the year.

The list of projects still in the works includes:

Sewer and street safety upgrades spanning East Fourth Avenue to McGill Street. One lane in either direction will remain open for the duration of work, which runs until spring 2020. The current sewer line was laid in 1905 and is being separated into two streams to divert sewage and rainwater. Pedestrian crossings and sidewalk improvements are also taking place.

Structural and seismic upgrades that will run until 2021. A public consultation on the future uses of the bridge deck will last all year.

The bottleneck that seems to never end will eventually end in the spring of 2020. The underground pipe network used to heat Olympic Village is being expanded from First to Third avenues and other parts of southeast False Creek. While the utility work is being done, the street network and sidewalks are also being repaired.

The bulk of the work is taking place on near Haro, Bute, Denman and Chilco streets to replace a water main installed in 1913. The work is expected to continue until the summer of next year.

Sewer and street infrastructure improvements are slated for the stretch of Macdonald running from West First to West 16th Avenue. Sewer upgrades will help divert waste water from flowing into English Bay. Street rehabilitation coordinated with TransLink’s trolley wire relocations are being done as part of the early work for Broadway Subway until spring 2020.

The area improvements include utility upgrades around the mall, though the city offered no timeliness around completion.

Know before you go by logging on to www.vancouver.ca/road-closure or by using the VanConnect app.