Life in the Bike Lane: Matthew

In this series we stop people along the bike lanes in Vancouver and have chats with them about their thoughts on cycling, their bikes, and more. Have a look at the archive HERE . Name? Matthew. Bike's name? Gus.
0
Nov 9, 2015 11:49 AM By: Britt Macduff 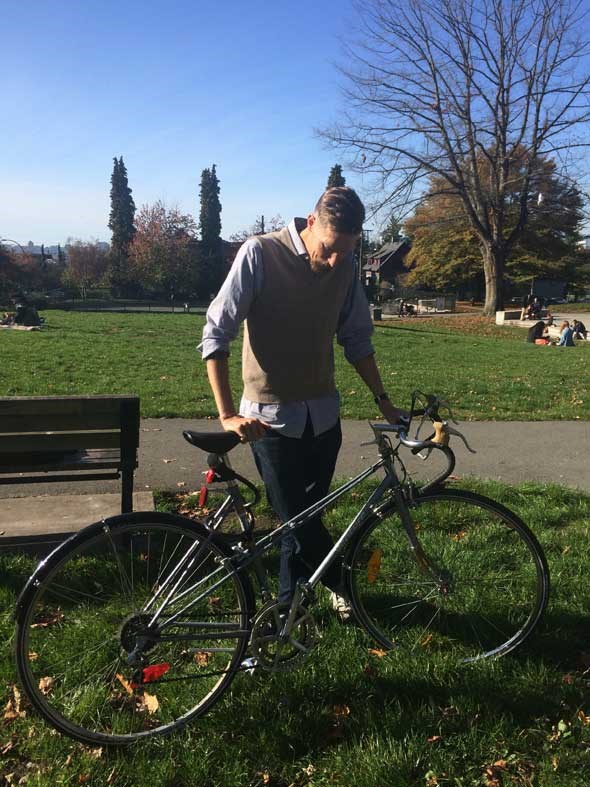 Tell me about Gus?

My bike was my Father's and I brought it over from Victoria as he wasn't riding it much. I'm not sure how long he had it for as I wasn't living with him then. It's a Super Saber by Venture.

Do you ride Gus every day?

I do. My commute used to be half an hour each way. Now it's only five minutes because I currently live close to work.

What do you do for work?

I drive the ferries in False Creek. I've been doing that for the last two and a half years.

You must enjoy it then?

It's nice when the weather is good. Right now it's quiet because it's the fall but it's also beautiful out so it's the best of both worlds.

Do you have favourite places you like to bike around Vancouver?

Well, when I used to live in East Vancouver I liked the commute which was riding along Adanac and down to Science World. I was going to say the seawall as well but I actually don't ride along there that often as I'm usually in a hurry. Although now that I live down there and my commute has shortened I enjoy the beauty of the seawall once again.

Are you ever worried about having your bike stolen?

I have had all of my bikes stolen but I've also acquired all of my bikes for free so I'm not very attached to them. I currently split up my time between living in Vancouver and on Bowen Island so I just bought another bike for my island living. I bought it off Craigslist for $100 because it looked like it was in great condition and was even worth the trip to Nanaimo to go pick it up. It's got great fat tires and fenders, which will be great for cycling around Bowen.

How come I don't see a helmet strapped to your bike?

There are a lot of reasons. I'll start off by saying that I'm actually very pro-helmet. I just feel that the most vulnerable amongst our society should be wearing helmets, like automobile drivers who comprise 34% of fatal head injuries in the States. Next are pedestrians and maybe that should be optional because they are only 7% and with cyclists it should be optional as well because they make up only 1% of fatal head injuries.

What else causes the deaths of cyclists?

I didn't look into that and am just using those statistics tongue in cheek. The real issue is car culture and what kind of city we want to promote. Wherever mandatory helmet laws are enforced cycling ridership is drastically reduced. When you force people to wear helmets they are less willing to ride and it sends the message that cycling is dangerous. The philosophy in the Netherlands and various European countries is that cycling is a safe mode of transportation and when there is a collision it is almost always the car driver who is liable. Drivers then drive accordingly by adjusting their speed when they are sharing the road with cyclists. There are very few deaths by collision and nobody wears a helmet there. The infrastructure is built around people and cyclists. So I kind of joke that I don't wear a helmet, even though I would be undoubtably safer wearing one because it encourages more people to not wear their helmets and therefore more people to cycle.

What stops you from moving to somewhere like the Netherlands?

Time and money. Time being 3 months and money being not enough at present. So I will *fingers crossed* be moving to Amsterdam at the end of December.

What other than cycling culture made you want to move to Amsterdam?

Mainly to learn Dutch. And I like that they have a very sociable society. More people are walking and it seems more personable.

How long do you think you are going to go for?

Hopefully a few years. The citizenship application is still in progress.

What else would you change about cycling in Vancouver?

For North America, Vancouver is a very pro cyclist city. We still have a long way to go, but more bike routes and awareness in the public consciousness of cyclists would help us on that journey.

How converting one trip per week to non-car could have unexpected benefits
Jan 17, 2020 3:46 PM