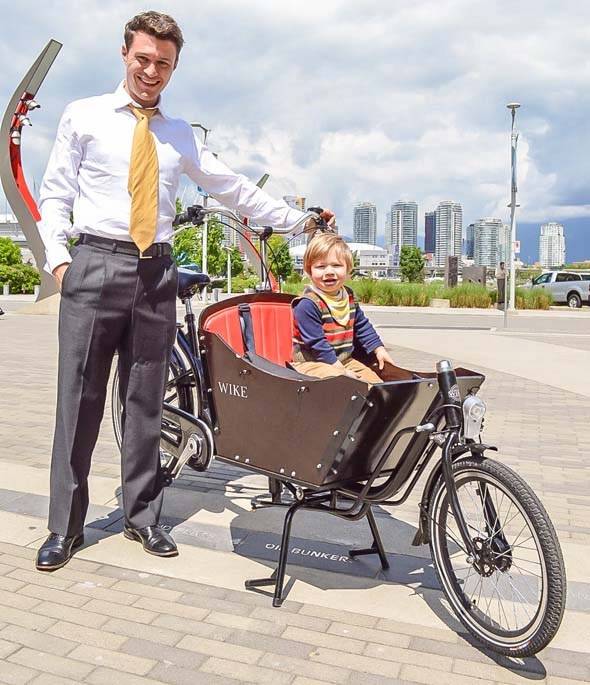 Neil and Rafe posing for a portrait in the Olympic Village.

Back in March, I wrote an essay for Vancouver Is Awesome about Charles Montgomery’s new book Happy City, and how it perfectly articulated our family’s own decade-long journey from the suburbs of Toronto to the heartbeat of Vancouver. In the coming months, I’m going to share with you the experiences unique to this city that fill us with pride, joy and excitement; allowing us to build a happier city, just by living it. 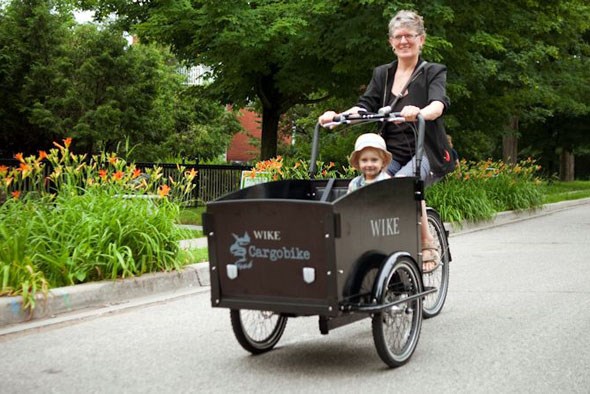 The tweeted photograph that innocently started it all.

It all began so innocently: late one Friday afternoon, having stumbled across a cargo bike distributor located in my hometown of Guelph, Ontario, I instinctively tweeted a photograph from their catalog, along with a link to their website. I then made my usual pedal home – unaware of the commotion I had just caused – to find a lengthy email in my inbox from Neil Salmond, a colleague I was first introduced to via Twitter, but later got to know personally at various meet-ups and social events. 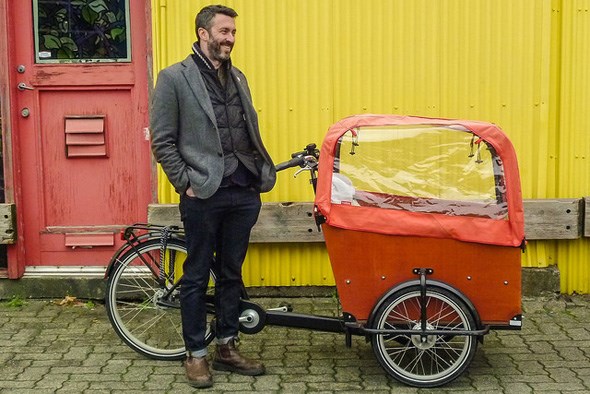 One of my first encounters with a cargo bike; we made a short film about Simon.

Neil – as it turned out – was in the market for a bakfiets (Dutch for “box bike’), and this brand was almost half the price of anything else he had seen. He was understandably excited, yet skeptical, about his discovery. These inventive, pedal-powered vehicles have roamed the streets of Amsterdam and Copenhagen for decades, but are only now making their way onto North American shores. Living car-free with children sometimes calls for a unique way to transport precious (and not-so-precious) cargo, and this magnificent machine just happens to fit the bill. 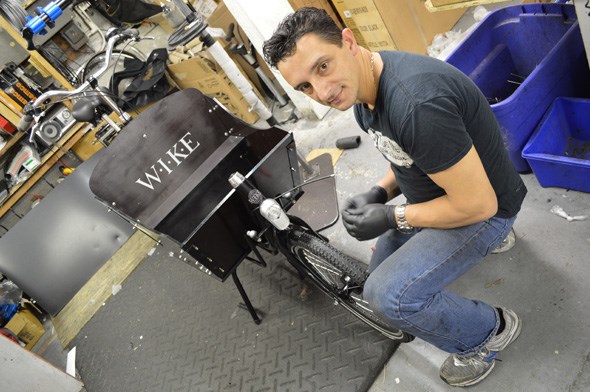 A Bike Doctor mechanic carefully assembling the Wike in their West Broadway shop.

After some research and a candid email exchange with the Wike sales department, Neil was sold on the “Box Bike”. He arranged for it to be delivered to the Bike Doctor, where I knew owner Paul Bogaert had experience importing cargo bikes. Not really trusting himself with a screwdriver, Neil was more than happy to let Paul take care of the assembly and maintenance. Just over a week later, a large flat-pack arrived at Bike Doctor's West Broadway shop, they constructed it in an afternoon, and Neil now has a knowledgeable place to go for regular tune-ups. 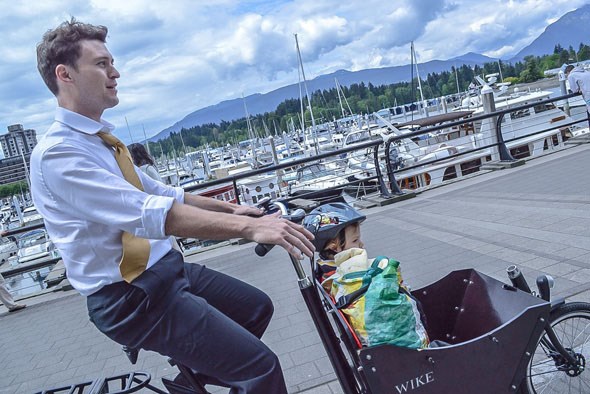 Riding side-by-side with Neil and Rafe on the Coal Harbour seawall.

According to Paul, Vancouver’s cargo bike market remains quite small, but growing as our bike network improves. “Many retailers have been hesitant to stock them, because of their size and infrequent sales. However, with much higher interest and more options available, conditions are shifting, and cargo bikes are now starting to appear in many North American bike shops." The topography of our city is also a challenge for some, but models with electric assist are beginning to address that. When out photographing for Modacity, I have certainly noticed more and more cargo bikes on the bikeways – carrying everything from children and pets, to groceries and landscaping supplies! 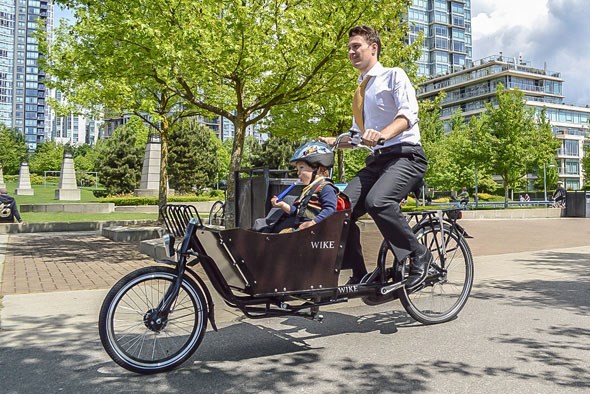 A quick spin through George Wainborn Park in Yaletown.

At first glance, the $1,200 price tag may seem steep. But that $100 a month for the first year isn’t far off the monthly transit pass rate, and by year two you’re in the money. And certainly the negligible cost of servicing the cargo bike, is nothing compared to the never-ending expenses that come with owning an automobile – financing, maintenance, fuel, insurance, parking, and so on. Best of all, depreciation is minimal as a well-maintained bike can easily hold most of its value. It’s really an investment that’s built to last longer than you will need it, before moving on to new happy owners. 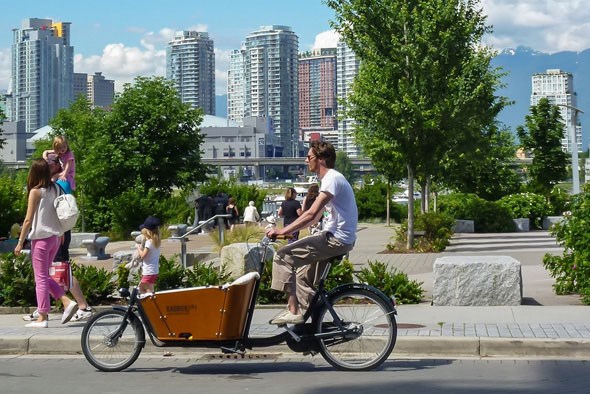 One thing is for certain: the bakfiets has been a definite hit with Neil’s eighteen-month-old son Rafe. “He just loves sitting up front and watching the world go by. He’s even fallen asleep a couple of times on the way back from the beach, a sure sign he’s comfortable in there!” The smiles and waves they get from passers-by never end, and folks are constantly stopping them on the street to ask questions: where they bought it, how they find using it, how much it cost. “It’s been fantastic to see how much friendly interest – and latent demand – there is for these bikes.” 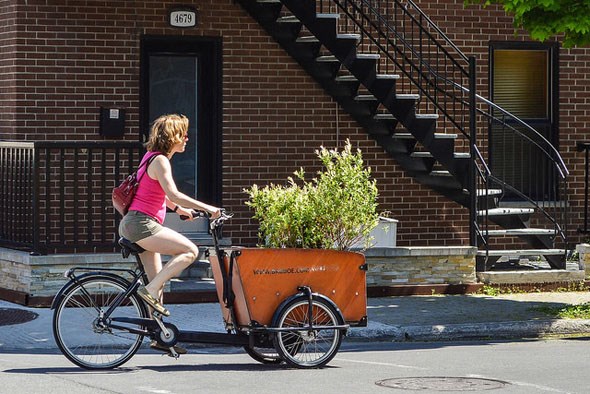 A three-wheeled version photographed on a recent trip to the Plateau in Montreal.

There is a downside to the novelty, though. Much like owning a pick-up truck everyone wants to borrow, Neil has been inundated with requests to take his Wike for a spin. I was guilty of this just two weeks ago, as we borrowed it for a day to shoot one of our Cycle Chic Films. Neil was delighted when I returned it his vehicle in tact – along with a (full) growler from Bomber Brewing in the box. He really is more than happy to share the (bicycle) love with his friends! 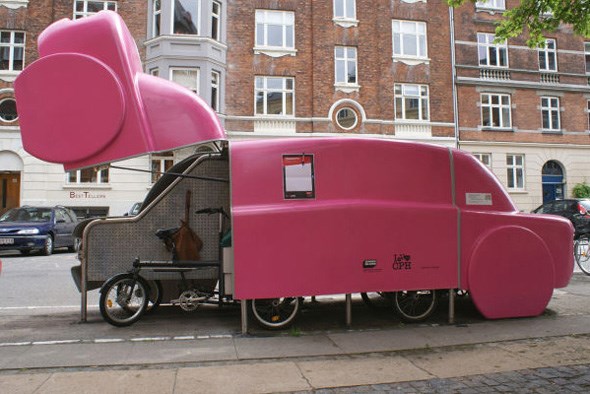 I do wonder how long it will be before Vancouver’s vibrant sharing economy clues in to these practical machines. They seem ideal for the cooperative model, so it can’t be long until Modo (and others) offer them to their members. Of course we will need to consider creative solutions for secure parking facilities (as they have in Copenhagen). Either way, the future is definitely bright for the cargo bike in this city, and I’m thrilled to see it play an increased role in our steadily maturing bicycle culture.

Chris Bruntlett is the co-founder of Modacity a multi-service consultancy focused on inspiring healthier, happier, simpler forms of urban mobility through words, photography and film. You can find Chris on Twitter: @modacitylife.